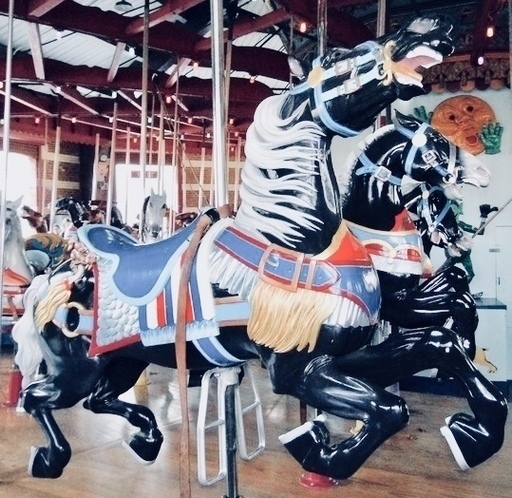 The feeling of forward motion had become so familiar that when he came to a stop, the world seemed to creep slightly backwards. His horse shuddered and grew still, the tremble of flesh growing firm until all he could feel was plastic. Hard plastic between his knees and under his hands.

Everything shifted then, became grayer, colder. That’s when the music began. The song started in the middle, fading into his consciousness as if it had been playing all along and he hadn’t noticed, or maybe he’d just forgotten. Out of tune and frantic, calliope pipes clumsily meandered over top of a regimented organ and comically disjointed cymbals.

It felt like waking up from a dream. Or falling asleep and starting a new one. Sometimes it was hard to tell.

The girl with purple and blue hair watched him from the shade of a gnarled elm tree. Her face was vaguely familiar, but he couldn’t recall her name. He stared at her, she raised her hand in a small wave and smiled with half her mouth. Had he arrived with her, or was she just someone he’d met once before?

His face crinkled as the mystery of it swirled into the rest of the confusion.

There were other people now, too. Loud people. Children clambering over the backs of painted animals, screeching for attention. Clumps of young women in uncomfortable looking clothes pretending to be happy. Adults with far away looks on their faces.

The clattering of shoes on old wood pounded in his ears like rapid fire gunshots coming from a thousand directions at once. He tried to focus on his hands, his knuckles white and still gripping the horse’s saddlehorn. Everything, everything spun around him. The music, the plastic, the girl, the noise... it all tumbled together and tilted the earth in the opposite direction from where it should be so much he thought he might slide sideways across the barrier of whatever plane this was and into another one altogether.

It wasn’t that any of this was particularly unfamiliar. It was all just so very unexpected.

Colors spilled together like a thousand cups of paint in an artist’s studio, he squinted over and over trying to force them into shapes. How had he gotten here? His back arched outward, tucking his soft belly away from a world gone nonsensical and weird.

He recognized the song now, and the wood worn to a shine from a half a century’s worth of feet. But, it didn’t make sense to find himself here when he had just been in the other place.

Suddenly, the swirling dissipated outward, like ripples across a mirror-still lake, and he was alone. The girl with purple and blue hair picked up her book and began to read. An invisible cymbal crashed above his head and slightly to the left of him. He was alone. Alone, and he didn’t like to be. Not like this. He contemplated sliding off the strange mold of plastic underneath him, but a bell rang three times, and a noise began somewhere beyond the tie-dyed kaleidoscope of color in his immediate field of vision.

The noise grew closer until it turned into a swarm of movement like honeybees returning to their hive. The clattering began all over again as new outlines of different people filled in all the gaps around him until all the empty space was occupied. He turned his head to ask the person next to him how he had gotten there, but just then that same bell rang three times again and before he could speak his body was lifted slowly up and set gently back down.

It happened again. And then again. Over and over until the soft rotating undulation once more became part of his body and he knew the motion was coming from inside himself.

The horse shuddered, growing softer as if it was an ice cube melting in the spring sun. Free from its’ stasis, the horse reared back and they charged together through an explosion of greens and blues. They were back on the open field, roaring across soft grass, wind blowing hair back from their faces. The cymbals turned into a pounding, the pounding of hooves on a hillside, and he breathed in the air that was rushing now into his lungs.

The alien world that had surrounded him faded now around the edges of his vision until it was completely lost. The horse shook its’ black mane in the sun and he reached out to stroke the warm ebony strands.

He stopped wondering what had come before. He forgot about the girl with purple and blue hair, he forgot about the crowd of loud strangers, the cluttered park filled with truants. None of that mattered. The only thing that existed was the emerald green grass stretching into the distance to meet the sky at some distant point, the place where heaven and earth touched their fingertips together in one breathless embrace before opening into the realm that lay beyond their joining And each gallop brought him closer to that miracle, each gallop brought him closer.

Black Is The ColorAmy Maeven Pace

Black Is The Color

Two powerful South Louisiana families, haunted by a string of brutal summers and loss, bookend the tangled life of Ezter Doucet and the soul she’s trying to save. Can she dig herself out of her own grave before Ben, the disgraced cop intrinsically intertwined with her past and hell bent on proving she was a madman’s willing accomplice- and not his sole survivor- buries her alive? Obsessions run as dark and deep as the Mississippi River in this tale of blind love, misplaced loyalty and death. 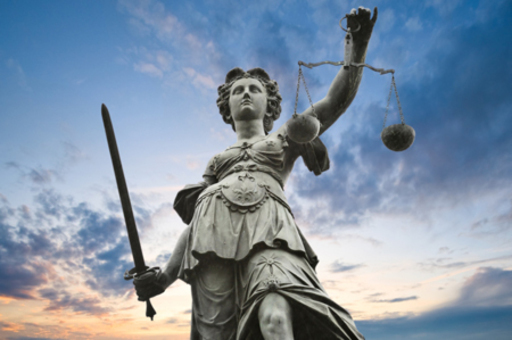 Lucky that justice is blind. Sometimes it's better not to see how the scales are balanced.