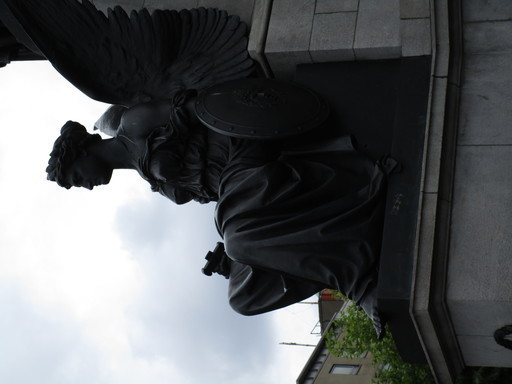 “It is 2050. Queen Elizabeth still reigns and people are starting to get suspicious.” For a most unfortunate Palace Guard, the answer is found in blood and metal.

There were more of us on duty than usual today. It wasn’t any particular holiday, nor state of national crisis, yet here we all were in excess, boots polished, bearskin hats pulled down to block our eyes from view. It was a particularly dreary day, as many days are in dear England. Even with the effects of global warming, the United Kingdom still seemed to stay as gloomy as it had been decades before. It must be the people keeping it that way; no one smiles, and no one laughs without at least a pint in them. Still, you get used to it. In my mind, we’re a good lot.

When our patrol disbanded, I was ordered to report up to the main security office of Buckingham Palace. I’d done it twice before already, to let them check on my performance, but each time visions of reprimand flooded my mind’s eye. As my boots soundlessly treaded the neat red carpet, past the infrared sensors and various hologram-enhanced portraits of significant royals from days now long past, that’s when I heard it.

Steady, and mechanical, somewhat like the inner cogs and gears of a grandfather clock—timeless, and punctual. I had been walking rather close to the wall, and found the nearest door ajar. A door I had never seen before; a door hidden in the wall, now cracked open, from the inside. I took a half step to better examine this conundrum, when my boot pressed down on wet carpet. It was noticeably redder here than the other patches. A burst pipe, perhaps? I should bring it up to maintenance—

Then came a second noise, far worse than the first: a groaning turning, metal on metal without oil to slick the surface. It was followed by a snapping, tearing, and gnashing; it was a chorus of chrome maladies. I knelt down, wetting my knees in doing so, and peered into this once impregnable room.

She turned and looked right at me. Jaw unhinged, half her face missing, and beneath it, a patched together frame of soldered mechanical bits from time periods that shouldn’t even be compatible. Her gown was torn open in the chest, exposing the whirring and humming of machinery well past its time, but struggling by on some unknown force, be it electricity, steam, or something beyond my comprehension. The chief of security lay motionless at her feet, and I knew it was no matter of a burst pipe, but of burst arteries. With the clicking of her hideous heart, she spoke in static villainy.