Will marched, strong-willed to the front line. He smiled a good, exited smile. Not even the steady rain could dampen his hopes. He drew his steel sword and prayed for luck to whatever God lived up above him. He warmed up his limbs in anticipation.

He was by no means a soldier, but a lowly farmer. The war had been going on for half a year, and properly trained soldiers were hard to come by. So the kingdoms had recruited all able bodied men into their fight. But Will wasn’t going to let his low status stop him from achieving glory, and bringing home the King’s Coin to his family. For just enlisting in the war he got a whole golden royal.

A horn blew, slicing through his thoughts of glory and bringing him back to the present, and their battalion began to march over the hill and towards the battle. Will almost ran towards the field.

The enemy was Coroth, the feared warlord of the volcanic plains. Any experienced soldier there knew their task was impossible, but everyone who hadn’t seen a battle field before, like Will, held high hopes, like candles in the dark. Coroth’s army was three times large than theirs. His army was well trained. He always seemed to have an infinite amount of troops to send into the next battle as well. It was a losing war.

When they reached the top of the hill they stopped and waited for the next horn blast. But in those very moments they all took in the sight of war. And the hopes they held like candles flickered as a gust of doubt blew forth. Bodies of soldiers, armoured and not, dismembered, decapitated, disemboweled, lay collapsed and limp on the floor. Mud was the only ground there, made by dirt, blood and the steady downpour of rain.

Will stumbled where he stood, the thought that people could do such a thing sickened him. The second horn blasted and he reluctantly set of at a trot. Towards the horrible sight. They all kept their eyes on the enemy line, advancing as they were. Suddenly millions of thin black lines slid across the sky and arced towards them. “TURTLE FORMATION!”, yelled the commander and every soldier lifted their shields above their heads as arrows slammed mercilessly into them. Some men screamed as the arrows found gaps in the shield roof and secured themselves in men’s legs and arms, but the unlucky people were killed.

He felt his arm being forced down as the arrows plummeted into the shield. An arrow found the gap between his shield and the man in front and it buried itself into his thigh. The candles flickered once more, some even went out. Will growled and pulled out the shaft, but he kept moving with the group. He limped and stumbled onward with the shields. The smell of blood was starting to become an invisible wall of disgust and filth. When the final horn blasted they ran at the enemy. The battle cry’s of the men beside him filled his ears.

Enemy mingled with friend and the careful, clear cut battle lines turned into a brawl. There was no order, men slipped through the lines and cut others down from behind, or were cut down themselves. Some were caught in a circle of enemies.

The man in front was cut down and Will filled his place, his candle flickering. He came in with his shield up defensively. He quickly stabbed out blindly and managed to catch his enemy in the stomach. His blade slid in and he could hear a gurgling sound from the other side of his shield. He slipped his blade out and continued with a grim face. He slashed, aimlessly missing whoever the next person was. He kicked, out from under his shield and landed the blow on the man’s shin. He stabbed out and caught the man in the chest, he was dead before he hit the ground. He couldn’t pull his sword back out in time so he punched the next man. He grabbed his sword again and cut through the enemy line. His candle flaring as if fuel was added.

Their battalion had one mission, five minutes to do as much damage to the enemies soldiers before retreating and having the few trained soldiers they had replace them. They were told not to linger, not to do anything stupid. Think rationally, and they all would survive. But Will knew they would survive, they would be worshiped. They would win, and the commander knew it. But this and the next soldier unit would be their last push, they would win... or lose. Then their whole army would retreat to the King’s castle. Where they would hold, until their walls were breached by the hurled rocks sent by trebuchet and catapults, their doors battered down by battering rams. Their houses burned down and their last man fell.

Will’s arm started to drag with fatigue, he slashed slower and slower, and thus his guard was sloppy. His enemy managed to land a small slash on his arm and a stab wound in his hip. After what seemed to be hours Will’s vision started to flicker with the loss of blood and exhaustion.

The cold, metallic bite of swords tore his skin as he tore his own path through the ranks of enemies. He was surprised at how lucky he had been, no blow had been serious or life threatening. But each one made him bleed out that one bit faster. His blade a slow, spinning whirl of silver and red. He was moving slowly away from the main body of his formation. As well as slowly being surrounded by the enemy.

He stuck, slashed, stabbed, tore, kicked and punched at anyone who dared challenge him. He spun around and caught a soldier trying to sneak up on him. He threw his shield at him, it connected with his jaw and knocked him out. Will stabbed him while he was down. He bared his teeth and met the next attacker. Soon the soldiers started to back away from his furious wrath. Will took the time to look down. His shirt was torn and blood painted it, his own and the enemies.

Another man marched out of the circle and, with the strength of a fresh soldier, he tore Will's sword from his grip. The sword following it came down for a finishing blow, the enemy's face contorted in a sneer. Will did not flinch and raised his hands, catching the blade. The sword lacerated his palms then grated jarringly against his bones. Will pulled the sword to the side, punched the man with enough power to knock him out, grabbed his fallen sword and shield and stabbed his  blade down into the unconscious soldier. Will looked up with the look of a madman.

A soldier marched out of the circle of men. Their leader, Coroth. Some said he wasn’t human, that he was an elf or a monster. But no one knew because he wore a blank, forbidding mask, with holes left for his eyes, which stared into your soul. The commander wore a crown of gold with three diamonds embedded in it. His armour was as black as midnight, with spikes lining his arm plates and shoulder pads. He wore a cape that had almost been fully cut off and he could see those almost insane eyes staring at him. He had pointed ears and his right hand was a claw, like a dragons. 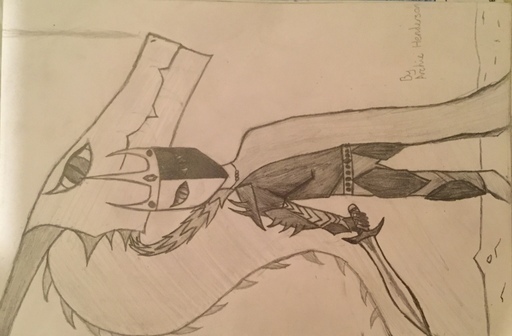 Not a book, just an explanation.