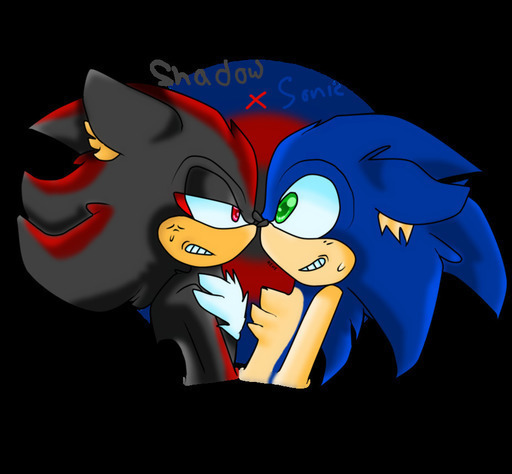 Denial at it's Best

Sonic is pregnant with Sir Lancelot's twins, his past partner, Shadow decides to help him. Will it be successful or not?

This is aimed for people who support Shadow x Sonic, Sonic x Sir Lancelot, and Sonic Uke/Mpreg. If you have anything against the subjects listed, simply click away from this. That is all you have to do.

I forgot the time where I was once happy with a guy, Shadow most specifically, I loved him, we...grew apart, I moved on, whilst he stayed alone. I am in need of his help. I pick up the phone and start to call him, his ragged, rough voice made my heart pound as he allowed me to stay at his for a long time, I-I just hope this won't be a repeat of our former relationship.

"Shadow!" I smile, seeing his truck. His slender body has barely changed, his gaze to me, waving slightly as he started to pick up my bags. I help him, smiling happily. I do not want to lose our bond. I hope he doesn't either.

"Thanks for letting me stay here for the whole summer and for the whole pregnancy!" Sonic beams, carrying two of his many duffel bags. I nod simply, there's no point in being rude to him right off the bat, I got to let him annoy me that much I hate his presence in my condominium. I helped him with the bags, storing them near my bedroom.

"Remember the deal, that spare room is for the spawn and you share the bed with me..." I rehearse, seeing the hedgehog nod, I relax, turning on the TV in the living room; shortly after Sonic joins me. We watched the news together in complete silence for 20 minutes, before Sonic changed the channel. "Hey! I was watching that in great interest!" I proclaimed.

"Well, I, Sonic the hedgehog was not enjoying a boring news program for over 10 minutes, so I choose something different." Sonic mutters loudly.

"The action channel!" He grins lopsidedly. I just groan. I averted my gaze back to the TV, seeing a criminal shoot a SWAT officer, steal the currency and scamper off, the poor camera crew followed the actor. I sigh, real life is more impressive than this garbage. I got up and head to the kitchen, making myself a salad, I really do not want to live with that dork in my living room, but I had to or Rouge gets my emerald, and I guess she'll also willingly burst in during Sonic's time of staying here.

I enter the living room again, seeing a dozing hedgehog. I sigh, placing my perfectly made salad and pick him up, taking him into my bedroom, well, I guess ours now. I dump him on one side of the bed, pulling the sheets to one side and roll him into the naked side of the bed, wrapping him inside the duvet. "Stupid Faker." I mutter to myself, heading back down to change it to a documentary channel and eat my salad. I'm not sure what made me want a salad, but I surely am glad I made it, if Sonic made it; all Hell would break loose in my damn kitchen.

I have to give him some credit though, he chose who to be with, but there's one thing I don't understand. We've already been together, together for around 4 years. Is the guy he chose really terrible? I mean, sure, we're no longer together, but that doesn't mean I won't care for him. I would do anything to keep him safe, even if there's zygotes inside him. I guess he still cares for me as well, seeming as he didn't shy away or flinch from me talking all of a sudden.

Night fell upon Mobius hours later, I heard nothing from Sonic over those hours, which concerned me. When he was having his first kid with me, he'd always shout for me, but there's nothing but pin-dropping silence. I got up and perambulate up the stairs into m-our room, peeking my head in. There I see, my bedroom TV on and Sonic giggling quietly away at whatever's on. "Enjoying the TV?" I ask, making the younger male flinch.

"It's fine, Sonic, you know what do in this house, you lived here for 4 years with me..." I remind him, my face blank. Sonic's face was quite flushed. He then nods, shuffling away from the artificial entertainment system to hug me shyly. I accept it, I mean, why wouldn't I? He's still the closest one to affection.

"T-thank you...F-for everything." He whispers into my ear, making it twitch, his face was a shade of rose, making me chuckle.

"It's alright...They can't hurt you anymore...I won't let them." I announce softly to him, calming his shaking nerves. I may not know who they are, but I will hurt them if they broke him.

They...? Who are they? I know for a fact that he doesn't know Lance, it's probably a good thing too, ever since I've told him I'm expecting twins, he's been really touchy over me, he purposefully feel me up during training and washes me after training, I can do both by myself of course but; it should stop.

Shadow's great company for me, especially since we've stayed close after breaking up. Should I tell him that Lance told me that if I'm pregnant I should marry him (I believe that's all lies) but I kept my mouth shut. I think it's bad that my feelings for Shadow never left, but it grew. I pressed my lips onto his dishevelled cheek, his cheek rising up in temperature and looking at me in pure shock. "W-we can't. Y-you shouldn't..." He stammers, trailing on his misshapen words. I knew the words, but the pain didn't hit me. Instead I pouted on his bed. This trick always worked.

He picked me up, bridal style and presses his chapped lips onto mine tenderly. I respond quickly back, the kiss heated up quicker than making hot cocoa, and I loved it. Of course we can't do much else so we stopped, our faces were a vivid crimson, he looks away, hopping onto the bed next to me. What did we do next? Watch comedy for 3 hours before falling asleep. Do I love him? It's slighty obvious. Does he love me? That's a question I wanted to ask for years.

A couple of days have passed since Sonic got his bags here, nothing much has happened, except Sonic getting anxious to get outside, or casually hiding my stuff. I avert my gaze over to him, he was staring out of the glass panel. Maybe I should wander around Station Square with him, I mean, I'm not on duty for the next 3 days and I think he'll enjoy that.

"Sonic..." I mumbled, his ear responded and looked over to me.

"Yeah?" He mutters back, his grassy eyes locked onto my geranium ones.

"Wanna head out somewhere? We can get ahead of the twins' room if we can." I asked, seeing his eyes brighten.

"Sure! I'd love to!" He beams, bouncing off of the couch and rushing to the bedroom and coming back down with...Clothes?

"What're the clothes for?" I mutter, raising an eyebrow.

"To hide my stomach." He blinks.

"But I think it looks cute on me!" He pouts.

"I'm not going to say anything about that, now c'mon."

We raced each other to Station Square, non-contact, of course. His azure quills blew gently in the summer's breeze, his face has never been so bright before, full of happiness, elation, everything. We head inside a store, Sonic grabbing a basket and scanning the isles. I don't know what he's looking for, but I wish I did, but in a matter of minutes, I lost him.

Is it just me, or does it feel like Shadow isn't following me? I turned my head to see a desolate isle. I guess I lost him. Oh well! Maybe I can grab some stuff I find really adorable! Maybe I can show Shadow them when I find him. I skipped over to some baby hoodies, some said "Pretty Boy" and others said "Daddy's Girl", I noticed something. I don't know what the twins will be. I just stared at them and grabbed two of each. I mean, why not?

I think I grabbed two of everything I saw, whoops. Oh well! They looked so cute! "Shadow?" I called. "Shaa-dow!" I call louder.

"This is worse than trying to find that damn fourth Chaos Emerald!" I heard a faint growl.

"Shadow!" I call towards the growl, hearing rocket skates approach closer to me.

"What is all of that?! That's going to cost my income and rent!" He shouts in a hushed tone. I innocently blink, pressing my nose against his. "F-fine, but you're giving them my rings." I nod, placing them in the basket, watching Shadow place them in carefully. "Unobservant, much?" He mutters under his breath.

I skipped ahead of Shadow dragging the basket behind him. A piercing hum attacked my ear drums as a fuchsia hedgehog was strutting our way. Amy. I shuffled behind Shadow, his ear only flicked. I pointed towards Amy and he nods slightly. Oh God, how will she respond?