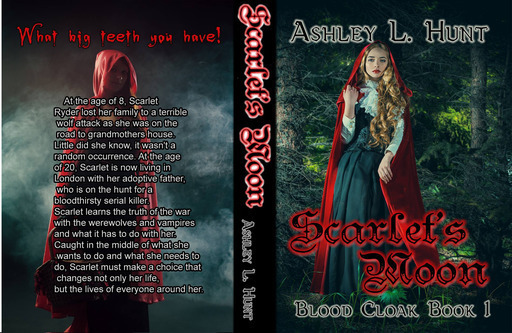 NANOWRIMO2015 At the Age of 8, Scarlet Ryder was orphaned by a wolf attack as she journeyed to her grandmothers. 13 years later, she learns it's not a random attack. Now the war between the werewolves and vampires is flaring up again and Scarlet finds herself in the middle of it. On top of that, Scarlet's adoptive father is hunting a ruthless serial killer in the dark streets of London 1898

An Excerpt from BLOODCLOAK BOOK 2 : MOONLIT SNOW
The wind dropped as a full moon rose in the cloudless sky. A great clearing separated the eucalyptus forest in the west from the stiff Fig trees in the east. The snow gleamed silver. There, with the moonlight reflecting off the snow and snow bouncing the light right back, the atmosphere glowed like a strange parody of daylight. The tall still trees threw lurid shadows across the soft, crisp snow. All was silent.
Then, deep from the heart of the west forest, a twig snapped and the illusion was broken. Genevieve ran through the last line of trees, staggering into the snow covered clearing. Another twig snapped, this time much closer. Her pursuer was fast. Genevieve dropped her blue cloak to keep her speed. The long trailing fabric billowed in the wind and slowed her down. she had lost her stiff corset and metal Crinoline among the tangled branches and thick briers among the eucalyptus. Trees snagged and snared her at every turn, but the beast on her scent seemed to move powerfully fast. The hunter loped along, bounding through the snow. She could see the outline of the great hulking beast. A large black shadow against the white snow.
She could taste the joy in the hunt for her pursuer. The excitement of tracking, the prospect of ripping Genevieve's throat out had the beast almost giddy. and more deadly.
Genevieve had heard whispered tales of the were-dingo, but she had never fully believed them. At least, not until she came face to face with the deadly hunter. Strange in retrospect that such a rare race of vampire wouldn't believe in the were-dingo.
With a great leap, the hunter cleared the trees. Genevieve knew it was almost over, but couldn't feel frightened. She wondered if she could feast on the hulking monsters Ecstasy until the fatal blow.
the creature pounced like a creature from a nightmare, catching her cloak in his great jaws.
'Scent!' Genevieve realized. The beast couldn't see her, but was going solely by smell. Genevieve tasted a stab of frustration as the beast howled in rage. Lurid shadows and the muted snow hid her movements. Genevieve backed up to the first line of fig trees. Mid June was too cold for the sweet little fruits, but the trees were heavy with skeletal branches. Had she heard the old stories, she would perhaps have gone around. She dropped the last petticoat and let her dress hang down. It wasn't fashionable, but at least she could move. The thick black fabric and her pale skin hid her among the snow and trees, but her red eyes stood out for miles.
The hunter lifted a long cruel snout into the air and howled. Genevieve backed up and stumbled into a thick ravine. Black shadows swallowed her as long, heavy vines tangled around the vampire woman.