Ten-thousand-year advice from an American Southerner

84 Reads
1 Favorite
Get the App

The first thing to selectively eliminate is technology. I was raised to be alone, to not connect, to not make the brave attempt to love or be loved. Except that's not entirely accurate.

I was expected to love, to adore, to serve, to follow, without being taught how or why. Herein lies the problem. If you're not taught how by a willing, loving teacher, you will always be stuck yearning for love. It will elude you until your heart breaks or someone very brave comes along and takes a risk on your wounded, nearly dead heart.

The technology gets in the way. We think we need it, but it insulates us from interacting, from seeing what or who's around us. You can't see the offered heart or hand if technology has seduced you instead. It nestles in our hands, our brains, our desks, our ears, and we don't hear birdsong, or voices telling us stories. We don't listen to the loneliness in the people who love us and gamble all that we'll take notice.

When it first started seeping into our lives, I looked around in restaurants and saw parents ignoring their children, lovers their abandoned companions, adult children their aged parents. I grew up in a time in the Southern United States where meals were communion, a ritual so practiced with conversation and manners that to ignore one's dinner companion was almost unheard of then.

Downtown in our small Louisiana parish seat, the volunteer fire department rang the noon whistle, letting everyone know it was time for lunch. At my mamaw's house, the kitchen was filled with intoxicating smells of cooking, her cook timing everything just right for my papaw's arrival. My papaw came home from his dental practice to have lunch with family, and a religious ritual had less meaning.

Strong iced tea with fresh mint, fried chicken so tender and juicy, fluffy white rice, gravy that still evokes a memory of mouth-watering anticipation, homemade yeast rolls, all served like communion in a church. We talked about our day, of school and work, of long-gone ancestors, and funny stories about parents. The phone rang with patients wanting to be fitted in that day for a decayed tooth. We would all pause to hear that heavy black metal monstrosity ring in the phone alcove of my grandparents' house, then go back to eating.

Nothing, not even a patient in need, interrupted our ritual.

I was always impatient, ready to spring away from the table and turn the wood clad television on, but I had such love and respect for my grandparents that I stilled myself and waited. Listened. Absorbed. That's one of the places I learned about hard work, good food, great story telling, duty, volunteer work, the importance of family, and love.

My papaw was Welsh-American, and despite his reticent manner, was an excellent storyteller. I listened to his tales of being a poor boy from Caldwell Parish in dental school in New Orleans, surrounded by mostly wealthy men from well-connected families. Of his struggles to stay in school, of Armistice Day and marching down Canal Street with fellow cadets in parade formation.

His housekeeper and cook, Mariah Moore, was another gifted storyteller, and where I learned about growing up hungry, poor, and with little hope. She was the one who introduced me to Dr. King, and the Civil Rights movement. And child loss.

Between my grandparents and Mariah, I had a safe haven, a cocoon they made where divorce and spousal abuse had no place, where sexual abuse was never dreamt of, and could never happen.

A few years later my mamaw was diagnosed with a malignant brain tumor, and I learned how fragile the cocoon was, and how quickly it deteriorated without being tended. My grandfather, a shy, very kind, hardworking man became mostly silent without my mamaw's presence. I went to live at another family's house for a while and ate meals with them, waited for life to go back to normal, except it never did.

My aunt and uncle were busy with their business, their children, and took my sister in. I didn't question it because I was unwanted, disliked by my mother’s sister. That I reminded her too much of my mother for comfort. That was when I learned to numb myself with television, to watch it until I was so tired that sleep came, and questions could go unanswered. Of course, these questions turned themselves into nightmares in my dreams.

There was a death, a wake, a burial I missed, and we went back to the new normal. My mother and her sister began to argue over the slightest things, and I realized how tenuous the truce had been all along. My papaw worked, sang in the choir with me, ate dinner with us, and existed until he remarried a very nice fellow church member. She brought him back from a deep depression, and they taught me second chances were possible.

I kept watching television, or that being denied, read books until I couldn't hold my eyes open anymore. If I'd had a cell phone and the internet back then, I would've anesthetized myself with them. I would've drowned myself in them.

Somewhere along the way, I lost the ability to be with people anymore, to relate, to listen, to conjure happiness and connection, to discern real love from fained. I slumped through life as a half dead child, wading towards the promise of love, rescue, and salvation. I tried to kill myself with an ancient bottle of amphetamines and ended up in the hospital, relieved that someone was finally paying attention to me, and hoping for a change in my life.

When I look around me at restaurants and see entire tables engaged in texting or scrolling through social media, I see a lost moment that will never happen again. Relationships that fail because they never got past the fragile stages of connection. Of eyes locked together, brains and bodies making the high dive into deep, abiding love. Half heard conversations, ignored for a picture of a cute girl, dog, or a pretty house. A pretty house one might have had with the man you've just met in a crowd of friends, who would've been your soul mate except for having to read that last message.

Food is consumed, drinks tossed back, light laughter at shared screens. The waiter brings the bill, and money is discussed, divided, paid. The one time everyone is paying attention at the table, then it's gone. The man you might have found to be the love of your life stands up, stretches, and looks about. He sees you for the first time, then his phone rings. He says goodnight and walks out talking on his cell, and the moment is forever lost.

Put down the phone, turn off the electronics, seize the moment. Don't let your life be sucked dry. Be in the moment and be loved. 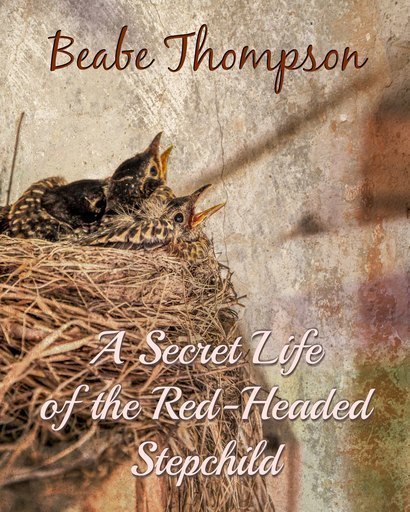 A Secret Life of the Red-Headed Stepchild

A collection of blog posts and short fiction by author Beabe Thompson.

A writing prompt from Tablo, adding to my WIP