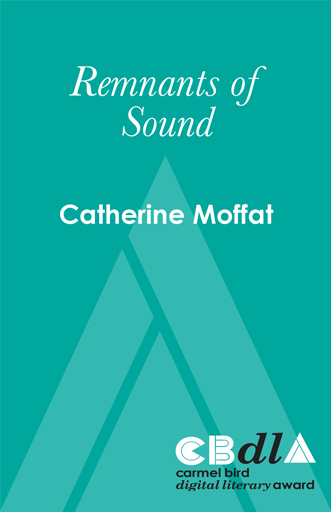 The short stories in Remnants of Sound slide between the real and the unreal, between the straightforward and the experimental. They chart the path of loners, drifters, the homeless and the heartbroken. They are stories of people at the edge of themselves and the edge of society where the smallest shift can have major consequences.

I hitched a ride out to the crossroads at midnight to sell my soul to the Devil. I waited three nights in the moonlight for him to appear. When he finally came he didn’t want me. Instead he picked up some snivelling guitar boy hero in tight jeans and Cuban heels.

‘Ah,’ I thought. ‘There’s a reason Mephistopheles hangs around at night waiting for underage geeks to impress.’

But I persisted. There was a fiery ceiling to kick, the ash of new ground to plough, earth to salt. ‘If you won’t give me what I want, at least teach me another chord,’ I said. ‘What about the one that David played?’

‘No!’ said the Devil and turned away. ‘Besides, there’s no pleasing him,’ he muttered.

It was the fifth night. I played jazz standards on my guitar. The Devil was getting annoyed. I think he thought I was keeping more suitable candidates away. Male candidates.

‘Go back to the grannies and the crones,’ he told me on the sixth night. ‘Stick to your own kind. Learn the lore of cauldron and pot, of the well swept hearth, of herbs that heal and herbs that harm. Study the raising of children.’

‘No thanks,’ I replied. ‘That’s not the fame I want. Every second television programme is a cooking show. I do not want to dip my finger in the dish and slide it round my lips like a lover. I will not reveal myself wet and glistening as a honey poached peach to the camera.’ Besides, cooking and cleaning has a way of reinforcing the notion there’s a right way to do things. It teaches that following instructions and cleaning up mess will get results. This is not true for other parts of life.

‘Go back to the grannies,’ the Devil said again.

But I’ve seen what happens to red headed witches and women who try to twist their faces free of the scold’s bridle. They’re raised high and then torn down like plaster saints in a holiday parade, trampled to the ground in the press of the wanting, hating crowd. I’ve seen them nailed to a board blow after careful blow. We watch and understand that what is done to them is done to all of us. They dance on their own pyres, both sinner and saint.

I do not want to be them.

On the seventh day, the Devil came dressed as a bridegroom. ‘Lay with me, and I’ll fulfil desires you didn’t know you had,’ he said. ‘I’ll reveal more than fifty shades of every colour. I will take you up to high places and give you the earth. I will cast you down and you will not be hurt.’

He went on offering inducements, but it was no more than I’d heard in the pub on a Friday night when it was near closing and a long weekend loomed with only the footy on television and no one to get the beers in.

‘Thanks,’ I said, ‘but I don’t want to be accused of docking your tail and grinding your horns to the nub, or of only letting you out to the Bacchanalia every other full moon. I am not my lover’s keeper. I have a soul to sell, and there is a price.’

‘You may have a soul to sell,’ said the Devil, ‘but you won’t find a buyer. You’ll have to do things the hard way, like all the other girls.’