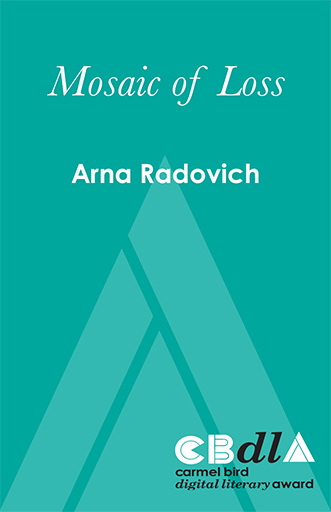 A woman rails against infertility, another against stifling responsibility. A couple struggle to accept the unacceptable and two families from opposite sides of the world find common ground in their loss. The fictional nature of closure, the perils of remorse, the bogeyman of duty. Fingers of wind sifting through the undergrowth of memory, a horse of old regret and a past that cannot be undone. Mosaic of Loss contains twenty-five short stories and micro/flash fictions that explore the inevitability of pain, the universality of loss and the small acts of kindness that offer some respite from the demands of grief.

Meaning is a human need. Life is a search, blind as moles, for the light.

Szymon Lewinski is losing his marbles.

Hippocampus. Amygdala. Cortex. Frontal lobes. On the other side of the desk, cupped between two perfectly manicured hands, Neuro-guy holds forth a musk-stick pink model of a brain. He’s trying really hard to explain the unexplainable.

As Szymon has become increasingly aware—he has ‘a problem’.

They can’t take education away from you. That’s what his mother said, before they took her away. But that was a lie. His education isbeing taken away from him.

Beta-amyloid. Plaques. Neurofibrillary tangles. What do these even mean? All the explanations and kindness in the world won’t change what’s going on inside Szymon’s head. Bottom line. There’s no cure. If Szymon understands nothing else, he knows this.

He strokes his hands through the hair that was once on his head.

In his waking hours, Szymon has always been in control of forgetting the things he needed to forget in order to keep living. The hours of darkness have been a different matter. For longer than he cares to remember, he has had wrestled with his past—a life and death struggle. At night, scenes of horror replay in his head, plague his dreams. And now, against his will they are seeping out into everyday life. He is becoming lost in his own memories.

Neuro-guy presses his lips tightly together and nods.

He’s a good looking guy, Szymon thinks, but already thickening. Good at giving advice to his patients but not so good at the healthy lifestyle himself.

As a disciplined man, Szymon is perplexed by the propensity of health professionals to neglect their own health. It seems oxymoronic to a man so damaged that he must nurse himself, with great will, through each day.

So here he is, with Neuro-guy, his daughter Hania and his biggest problem. The septic tank of memory is overflowing. The stink is leaking out. And it disgusts him.

He chances a look over at his daughter. Hania is sitting on the edge of her chair with the same wolfish look she’s been giving him of late. She’s been putting on the pressure. She wants to know about his past before it is ‘too late’.

It’s part of my history too, she insists. I don’t understand why you won’t talk about it.

Nothing good will come of talking about it, he keeps telling her.

What Hania wants to know, he has spent most of his life trying to forget, but his mind has become traitorous. Despite his formidable discipline and after all these years of being a king of words—the first with a pithy statement, a literary quote, a witticism of dependable impact—his errant brain is failing him.

How he survived all those years, was to make himself invisible, to erase the old self to the point of extinction, and afterwards, to create anew. He has grown to like his caricature self, he does not want the old self back. But he cannot say this to her, of all people, the grown-up child he has protected from all the stink of his life—to reveal anything now makes no sense of his suffering.

So they sit side by side at The Neurologist’s. So close, yet so far. The Neuro-guy draws a childish picture of a brain, Szymon’s brain, and presents it shyly to Szymon, like a child to his mother.

Aach. Szymon makes a guttural noise in his throat and keeps his eyes focused on the brain. He can feel his daughter looking at him. She hates it when he makes that noise. He knows She thinks it is disgusting, but She won’t/can’t say it. He’s never going to tell her why—what was done to him that still makes it difficult to swallow, all these years later. The past, the now, the future swirls like a bowl of watery porridge.

All this sitting around trying to think is doing his head in. He has been successful at using action as a means of keeping one step ahead of his demons. It was action that kept him going through the war years. Every thought, every ounce of strength focused on one foot in front of the other, surviving minute by minute, second by second.

When he got out, there wasn’t much left of him. He had to build a new self. Like growing new bone, it happened slowly.

When he’s been really pushed, he’s given minimal explanations of his unspeakable past.

Like years ago, when his granddaughter, Rosa, wanted to interview him.

Aach. His daughter knew how to turn the screws. But even Rosa and his other grandchildren aren’t interested now, if they ever were. No one in their right mind wants to know about such things.

Dad! Are you listening to the Doctor?

Szymon hears his daughter firing questions at Neuro-guy. He hangs his head and pretends to be asleep.

There’s a pause in the conversation. Szymon jerks himself upright. Neuro-guy is looking at him in a, a, -------- (fill in with a word that means ‘in a questioning way’). But Szymon’s mind is elsewhere.

Do you have any more questions? Neuro-guy says, finally.

Szymon shakes his head. He is keen to get out of there. He’s had enough.

They catch the lift down to the hospital lobby.

Just sit here near the door Dad. I’ll get the car.

Szymon collapses on to the bench. He is tired. He looks out the window and watches his daughter stride purposely down the road.

His daughter wanted him to go back THERE, with her. Was she mad? …

Arna Radovich writes for both children and adults. Her short stories and microlit have been published in Time (Spineless Wonders), FourW: New Writing, ZineWest, Verandah, Islet and Forty South Short Story Anthology 2018 (forthcoming). After spending her childhood living in hotels around Australia she now calls the Blue Mountains home.