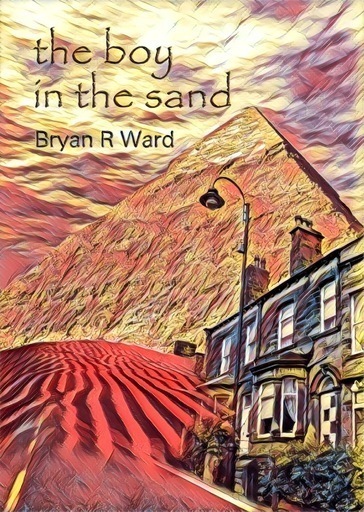 THE BOY IN THE SAND

A troubled boy is taken by his archeologist father to Egypt.

LIAM RUNS. The doors behind him slam shut as he races up the stairs, hiking boots with tag still on under his arm. He skids through a patch of snow on the pavement, but recovers and crashes through the bushes into the park beyond. He laughs at the distant voice abusing him as he makes for the goal posts at the far end.

On the other side of the park he rests for a few minutes hidden by the trees. Liam unzips the hoodie and clutches at his sides as he wheezes a little, feeling the puppy fat that all his school mates seem to be losing. He ties the laces of the two boots together and slings them over a low branch. As he lights a cigarette, he scans the field and all entrances for police and other adults who may have given chase. With no-one in sight, he leans against a tree trunk and exhales a lungful of smoke into the damp air.

Soon the sky starts to darken and the street lamps beyond the field come on. It is hard to tell whether or not it has gotten colder. Liam sniffs then uses his bottom lip to remove the condensation that has gathered on the light dusting of hair below his nose. He touches at the hair and puffs out his chest a little, and struggles to suck in his belly. He gives it all up as a bad idea and slumps down again before flicking the cigarette onto the wet leaves at his feet. Liam turns and urinates against the tree trunk then puts on his new acquisition and heads for home, crossing through the school ground as a light flurry of snow takes over the air.

Liam opens the back door and walks into the kitchen as his mother wipes her hands and hangs up the tea towel. He sees the empty sink and full rack, and huffs. ‘I told you I’d do it.’

‘It was sitting there. I thought I’d get it out of the way.’

‘No, what you thought was – well there’s something else he’s not going to do for me.’

Eleanor bends to pick up the heavy bag of rice on the floor. Liam shakes his head and does it for her, bumping open the pantry door with his hip. It bangs against the wall.

She glares at him. ‘Careful.’

‘Do you want it done or not?’ He stands mid-action, glaring back at his mother. The slight strain of the full bag tells on his face, but he is making a point. She raises an eyebrow and he continues.

‘It’s not that you don’t do anything, Liam. It’s just that you come to have certain expectations and when they’re not met, you wonder how much is your own doing or what you neglected to do in raising your kids.’

He slams the door shut again.

‘Careful Liam.’ She picks up a cup and saucer from the table and places them by the sink. ‘The school called. I couldn’t explain why you weren’t there today.’

He places the bag of rice on the ground and slams the door shut.

He deflates again and looks at his feet. There seems little comfort in his new prize when faced with the pattern of his days at school. ‘I’m just tired of all the shit, you know. Friggin bullies; they took my money for Pop’s present last week.’ Liam starts to sniffle. ‘And the teachers don’t give a shit. Think I’m stupid.’

‘You’re not stupid Liam, but you can’t not go to school. God, what’s going to become of you?’

Liam starts to pace now, the soles of the new boots squeaking on the lino. ‘I’m not going back there. Bastards. I’ll go to Pop’s early, tomorrow.’ He clenches and unclenches his fists, and thumps at his thighs. Eleanor notices the squeaking and looks to the ground and sighs.

‘Liam where did you get those? How did you get the money? You told me last time that was the end of it.’ The phone rings. ‘God, if this is the police.’

‘Stop, stop, stop!’ he yells before closing his eyes and gritting his teeth.

Eleanor turns away. She can’t bear seeing her son like this, wordless and fraught. Eleanor looks up at the photo of her and Liam as a six year old. His father was once a part of the picture, and that’s why it now looks slightly out of balance, poorly composed. Slightly more sky and grass on the right than the left. I really must fix that goes through her head. She looks closely at her little boy. On her knee and smiling, a pedal car at their feet and Liam in a super hero’s costume. There’s mud on his cheeks from running around with his father and a soccer ball. On her knee and smiling.

Liam can feel his cheeks and ears begin to burn, and a sense of an overwhelming nothingness envelopes him. Sounds die in mid-flight trying to reach him and opaque world-encompassing bubbles threaten to shroud him in a darkness that forbids escape. He turns and walks calmly outside before he says something unfortunate. His first step onto the grass in his new boots is onto a still-moist dog-turd covered in snow. The earlier flurry had become heavier, and he raises the hood over his head as he clambers over the fence into Stewart’s backyard.

Stewart’s bedroom contains none of the trappings of Liam’s – no football posters, no iPod, no mess on the ground. Instead, Stewart’s bedroom is a picture of order. Bed made, chair in at a tidy desk, school bag by the door, ready to go. The two boys sit on the bed.

Where Liam is light-skinned and chunky, Stewart’s heritage has given him a healthy, year-round tan. Stewart’s parents are Anglo-Indians, who themselves moved to England with their families as children. His look is ethnic, but his voice now is pure Yorkshire. And so it was the differences that drew Liam and Stewart together. Liam flicks through some of Stewart’s photos as he speaks. ‘Just ask your mum at least. Come to Bristol with me. I’m supposed to go on Friday.’

‘She’ll say no. She’ll say she’ll ask Dad, but she won’t be able to.’ Stewart reaches across to the desk and winces, gripping the shoulder of his outstretched arm.

‘Did he thump you again?’ There is restrained emotion in Liam’s voice. His own bedroom is on the opposite side of their house, but he can still hear the shouting when Stewart’s father is at home. Not for the first night though – he always waves at Liam the day he arrives. Not for the first few nights. But then the shouting begins, and the crash of plates or small pieces of furniture as they hit the wall. And the occasional thud of what could only be flesh and bone as it hits the floor. One night, Liam had paced his kitchen in a panic of rage and fear, fists and jaw clenching and unclenching as tears streamed down his face. And he was there, safe in his own house with a sleeping mother, who shouted in frustration and complained and questioned incessantly, but never hit. Maybe she had reason to, but that bastard next door was just drunk.

Stewart picks up the paper he’d been reaching for and lies down on the bed. Liam lifts the back of Stewart’s T-shirt to reveal several discoloured patches on his friend’s skin. A violent rainbow of grey, green, and purple. ‘Shit.’

‘How long he away for this time?’

‘Comes back in two weeks.’

‘And I go on Friday. Just friggin ask your mum, Stew.’ There is pleading in what he says. A sense of foreboding even, though Liam would have just said a ‘bad feeling’.

‘And then when he comes back, Mum’ll cop it.’

Stewart nudges Liam. ‘Hey, I wrote this one for you.’

With the noise of steam and whistles.

Going up in the air.

Left on the platform.

Stewart looks up to see Liam sitting there with welling eyes.

‘Thanks.’ Liam lies down beside his friend, an arm and a leg over Stewart’s body. Through the pain he feels, Stewart pats Liam’s head and neck. ‘So you’re not going to even ask then?’ Stewart remains wordless, but squeezes firmly at the flesh of Liam’s neck.

The snow outside falls more heavily. 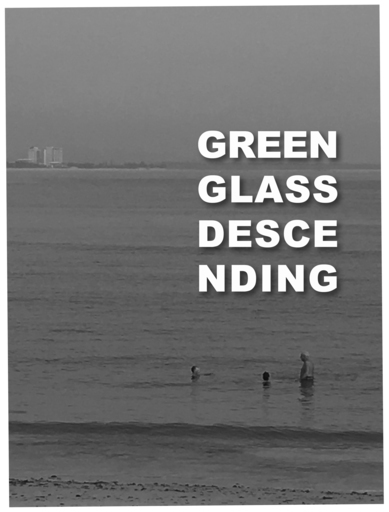 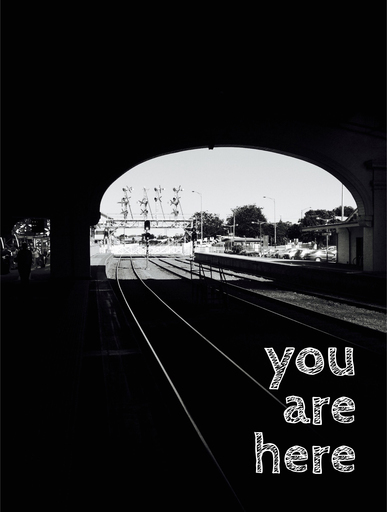