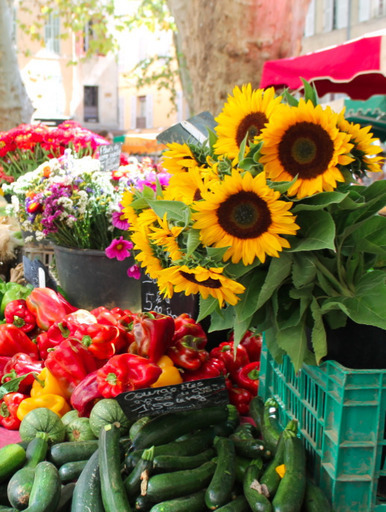 Tell Me Your Name

My entry for the 500-word contest :) I'm fond of this piece. I think I'll make something more of it.

74 Reads
4 Favorites
Get the App

I walked anxiously through the aisles of a Paris farmer's market, anxious and excited all at once. My eyes scanned throngs of shoppers searching for one perfectly symmetrical face. My heart rate picked up when it was nowhere to be seen. I looked at my watch – 23:46. She should have been there already.

I saw her there the first time two weeks before, trying desperately to communicate with a flower vendor about how she wanted one particular bunch of sunflowers and another particular bunch of lilacs wrapped together in the same sheet of brown paper. I stopped by the flower cart to snag a small bouquet of anemones to bring for my sister’s birthday dinner at my parents’ flat later that evening and my breath caught in my throat when I saw her.

She wore a mint-colored sundress that fell to her knees and well-worn black leather boots. Her black hair was tied messily in a braid that was draped elegantly over her right shoulder. On her other shoulder was a tattoo of a sunflower and she had a basket looped through her arm that had some organic produce in it. Her skin was tanned, her nose was spotted with freckles, and her eyes were the deepest brown and framed by incredible black lashes. She was exquisite.

She spoke Spanish with a few French words tossed in to try to explain what she was needed. It would have been natural to assume that she was a tourist but she seemed too sure of herself. I assumed what she wanted upon hearing one word: ensemble – together.

I mentally crossed my fingers that I knew what she wanted and explained it to the vendor in French. He promptly bundled the flowers together and handed them to her. She took them in one hand and fumbled to grab a coin purse with the arm that held the basket. I held up a hand to her before pulling a note out of my back pocket and paying the vendor myself.

She smiled up at me gratefully and I took in a shaky breath. Surely she was some sort of magic.

She left (much to my dismay), and I returned to the market the following Sunday and the Sunday after that in the hope that I would see her and she would recognize me. I did. She did. But our interactions were always limited to small acts of kindness for each other. I was bilingual, but for English and French. It killed me not being able to talk to her, but I returned each week nonetheless. Just seeing her was enough to take my breath away.

I felt a tap on my shoulder and turned to see her smiling up at me and my heart leapt with joy. She held up one finger before producing a bunch of note cards from her basket. She stammered a bit, collected herself, and managed to speak four words: dis-moi ton nom –