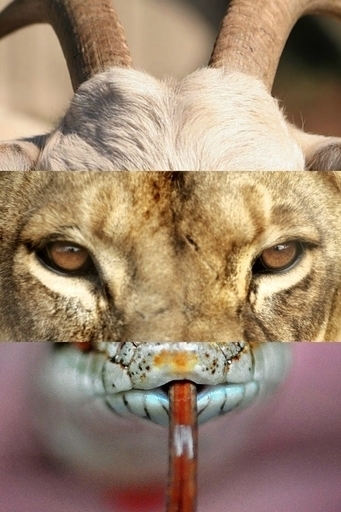 When Fauve sets out on a quest to save the creatures of The Jungle, she discovers magic that warlords will want to wring from her grasp. But a newborn evil will overshadow all the wars and everything everyone is fighting for, including Fauve and her creatures.

One hand held a rope of leaves and vines that lead her chimera; the other hand twirled her hair into a fuzzy line as she strolled through the undergrowth- until she froze as if electrified. Beneath the guttural snarl, the subdued grunt and spiteful hiss of Koilok, the flaps she had heard so many times before sounded. Underneath the shade of a wide yellow leaf clawed a coin-sized sea-wyvern, the colour of a midsummer morning. For a moment she could not think and could barely breathe, for all the dreams she had had of capturing this hatchling came coursing through her brain in a deluge. She lifted a foot, and when the grass shifted too quick tears almost came streaming down her face. Mechanically, she edged back to Koilok, praying the tiny wyvern would not slither away.

Koilok could not sense the wyvern. He continue to lick his paw with the tawny lion head, while the zebra-coloured goat head slept and the serpent tail poised warily the opposite direction away from the hatchling. On the musculature of his back, and around his waist, was tied a rope on which hung two a sacks, one white stained brown, and the other a velvet, almost luminous black. She kept looking from the bags to the wyvern, each time expecting it to disappear, and when it had not a fresh hope quickened her movements. She reached in the yellow-white sack, groped around, more and more frantically when she could not find it, glancing back every two seconds. It began to move its head slowly around like it smelt them. She almost gasped when she grasped the gnarly handle. Out of the bag, like a thin, pallid, version of Koilok's tail, a whip slithered out. She crept, whip trailing behind, then ran. The hatchling only moved its serpentine head, wilder as the sound of the girl grew. She was so close. It began to slither. She lifted the whip. It beat its wings. She brought the whip down. It rose. The whip cracked. The wyvern had disappeared.

'Fauve,' said an invisible voice. 'You will get another chance.'

'You do not understand,' she sank to the ground. 'I try and I try. I keep trying and you keep telling me I'm the brightest tamer you ever saw. But I keep failing. So how can that be? How can I be such a good tamer if I fail every time?'

The chimera came towards her, and the lion head licked her hair with his barbed tongue, the pushed his face against hers. She wrapped her arm around his head and rubbed her face into his, tears glistening on his fur. The snake had turned to face the goat and hissed with an open black jaw lined with claw-like teeth, while the goat pointed his horns to the snake and jabbed, missing every time as the reptile dodged.

'Koilok stop!' she warned the snake and the goat. 'Stupid animals.'

Koilok stood up left her. The feline mass stalked into the jungle.

'Raphael, are you there?'

'I am always here, Fauve,' said the voice.

'I wish they understood,' said Fauve. 'I'm trying to save them and they just run away like I'm the one to be feared- like I'm the one cutting down their trees, poisoning their lakes, destroying their entire world.'

'You are doing your best Fauve.'

She pulled herself to her knees then stood up. The whip dangled like a dead worm in her hands. Her hand reached to the petals of a solitary bud of spring hanging a the tip of a branch. It was smooth. The tree it came from sprouted baby leaves of an immature green on branches that forked slick like curled veins. Beyond the rock it grew on, a part of the jungle stretched, not so dense in trees, but burning with wildflowers: crimson roselarks, feaiys, aurelias, lavender hearts; and flying insects darted, fluttered, danced, reflected light in ways only tiny things can, oblivious to all but their pollination. Fauve gazed upon all this, her bottom lip trembling, imagining a vast expanse with nothing but dead soil and fallen, charred trunks, and dead creatures strewn upon the ground.

'I'm not doing enough,' she said, following the paw-prints of flattened grass, whip trailing behind her. 'For every creatures I save, or plant I sow, the Races destroy a million times more. I feel like I'm the only one trying to keep this planet alive.'

'You are the only person trying to keep this planet alive.'

'You know the powers I possess.'

She clapped her hand over her mouth. It could not be true. It could not possibly true: that she a little wandering girl should be the only person trying to protect this world, that of all the Races- the angels, the ghosts, the fairies, elves, vampires, merpeople and countless more- that she, a girl whose blood had no ties, who tried so much yet achieved so little, should be the only person trying to do some good for the world. Of all the truths Raphael had confirmed this had to be the most far-fetched.

'You do not believe me,' he said. 'But it is true. I have watched this world from times ancient and if the ancestors should behold what it has become they should strike whole nations to ashes. The world is a a pitiful place now, Fauve. Greed is walking upon the earth snatching souls and throwing them in his meat-cart, to be fed, plumped, and thrown into the oven. And war too is charging on his stallion extinguishing flames indiscriminately- even those that have just sparked. Every soul on the planet is victim to greed and war. The witless creatures of this world are tools or obstacles to the Races. But you, Fauve, you are not part of the Races. You are the one soul in which the seed of superior selflessness grows. Believe me when I say Fauve, of all the witted creatures of the Jungle, you are by far the most unselfish. The Jungle needs you Fauve. If nobody else will think of the Jungle, you will.'

'Me... What about the angels? You told me angels could do no wrong.'

'I can't even catch a baby wyvern, Raphael. If I am the only one saving the creatures, then I must be the one to save the Jungle. How am I supposed to save the entire Jungle alone?'

'You will not be doing it alone.'

'I'm not talking about you Raphael. I mean real people that can touch and do things, not a spirit.'

'I was not talking about me.'