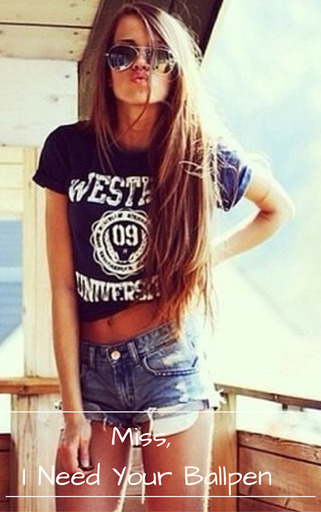 Miss, I Need Your Ballpen

There are millions of pick-up lines. For girls and boys. Some work. Some end up with the other person getting a bruised ego. Some are cheesy. Some are romantic enough to get you a girlfriend. ...or maybe even a wife. Many children ask their parents, "How did you meet?" For the story of Lady Hart and Andrew Miller; They start out with a simple request, a hot guy, a beautiful girl, and someone's pen. All he said was "Miss, I need your pen." Just like that. I fell for him.

46 Reads
1 Favorite
Get the App

There are millions of pick-up lines.

For girls and boys.

Some work. Some end up with the other person getting a bruised ego.

Some are cheesy. Some are romantic enough to get you a girlfriend.

Many children ask their parents, "How did you meet?"

For the story of Lady Hart and Andrew Miller;

They start out with a simple request, a hot guy, a beautiful girl, and someone's pen.

All he said was "Miss, I need your pen."

I fell for him.

THE sound of her alarm clock buzzing, filled throughout her room. "This better be important." Lady groaned. She was just in the midst of the climax of her dream, well up until her alarm blasted and woke her up.

She checked the time on her phone, surprisingly, it didn't sting her eyes like the first few mornings she did this, perhaps her eyes was already used to seeing her phone early in the morning.

The time on her phone was 7:00 am, Sunday. Ah! Of course, school. She thought, she wished she hadn't checked her phone. She would've gladly missed the first day.

But maybe Fate had something for her today? If that was true, she hopes for free ice cream. She actually didn't care. She was already going to college, she could've skipped if she wanted to, but her parents sent her to the best University. She couldn't waste their money.

Although, she could demand a refund and use the money to travel all over the world. Nonsense! Pure rubbish, she thought.

She hadn't noticed that she spent ten minutes day dreaming. She decided to start her morning routine. If she wanted to pass this year, she could've at least imprinted a good first impression on whoever will be her professor for her first period.

LADY couldn't get enough of the scent of her new body lotion, which was given to her by her grandmother. The scent of Fiery Pomegranate, Rare French Peach and Luminous Apple were layered all throughout her skin. Of course, there were more extracts, but these were the ones that stood out the most.

It made her skin super soft and silky, she, herself, couldn't resist running her hand up and down her arm.

Originally, she wanted to make herself a Turkey sandwich, but she was hesitant towards that idea. The last time she made that kind of sandwich, she ended up triggering the fire alarm. So, she decided to go with something safer; cereal.

Minutes after, she grabbed her bag and sauntered out to the door.

"Good morning, Mr. Remtoll." She happily greeted the old man. All she got was a grunt in response. Nonetheless, she continued to walk towards her Uni. It was just a couple of blocks away. Besides, she needed the exercise.

During her journey, it was getting boring. A few people were awake this early on a Saturday, considering it was a rest day for students and workaholics.

But people who had the same schedule as her, suffered the same fate as her. When people were going to malls, shopping. She was in her University Library, reading. They weren't allowed to leave, unless it was their dismissal, or unless it was an emergency.

Her schedule was a bit odd. To her, also. But at least she went to school, once a week. She was thankful for that.

She was also thankful that it was her last year attending college. After this year, She'd go to Paris, Rio De Janeiro, Amsterdam, Manchester and maybe the whole world!

Lady didn't know why she was so intrigued by different countries and cities, she just felt like the places were calling out to her.

She felt the sun's rays hit her body. She welcomed the warmth that it radiated. She also knew to walk a little faster since it was almost 9:00 am.

Time. That's all she needed. The time on her phone was 8:45 am. She knew she would be five or ten minutes late, if she ran. And ran she did.

The wind brushed her face almost as if she was racing with the air, she tried to keep her stuff from falling out of her bag.

By the time she reached her destination, she noticed that students were still chatting, laughing and gossiping. The nerds, that were never late to class, was talking nonchalantly. Do they not care that they are going to be late any minute? She wondered.

Her eyebrows scrunched in confusion. All these students were acting so chill, almost as if the warning bell wasn't going to ring any minute now.

Then her best friend, Abella, approached her, "Bonjour, why the rush, ami?" Abella asked. She was confused as to why her best friend looked like she just finished a race.

"What time is it?" Lady answered her best friend's question with a question of her own. Abella checked her watch, "A twenty minutes past eight, pourquoi?"

Ah! Yes! She mentally slapped herself. She forgot that her phone had a malfunction with the time settings. Stupid girl. She scolded herself.

She had lots of spare minutes, at the most, before her first class starts. She decides to make the most of it. By of course, catching up with the latest gossip. Her two best friends, Abella, the French chic. And, the fiery spitfire, Valerie, she was a Spanish beauty. Leaving her, Lady, the New Yorker and to-be-journalist.

Since she dreamt of going to different places, she wanted to write about it and share it with other people.

The three of them stayed under the shade of the Willow tree, "Did you know that the Andrew Miller is coming to this University?" Her friend, Valerie gushed. Lady rolled her eyes, she knew, only Valerie would be updated with these kind of juicy gossip.

"I heard he has an espléndido body, de rechupete." Valerie said in awe. Lady was used to their usage of different words that she couldn't understand. In fact, she was intrigued. She had an idea of learning Spanish and French. If only she could stop being lazy.

"You joueur!" Abella scolded her friend, "You have a boyfriend." Lady pointed out.

"I'm inocente." Valerie threw her hands up in surrender. As if they don't day dream about other hot men. Oh yeah, they don't have boyfriends. She reminded herself.

Just as about one of them was going to reply, a huge commotion started. Mainly caused by the female population. Swooning looks from the girls. Envious looks from the boys. This could only mean one thing. Judging from what she heard, Lady knew who it was.