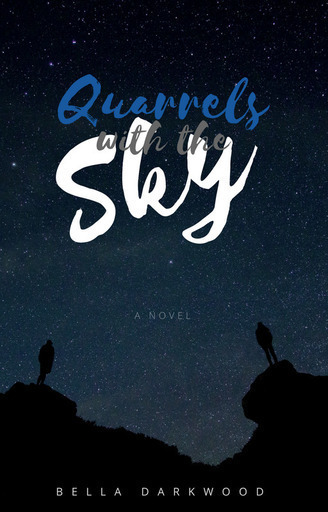 Quarrels with the Sky

59 Reads
0 Favorites
Get the App

​"To the inconsiderate fuck who can't decide whether or not to get out of their car, at least turn your gods' be damned headlights off!"

The words snapped sharply into Madeline's mind like a cold bucket of water tossed on her in winter. She wiped her eyes and looked up in confusion.

There was no one parked in front of her car, only a row of empty spaces and the sidewalk seating of the coffee shop.

At this hour the seats were deserted, all except one. In the bright glow of the headlights against the shop window it was hard to see who sat there.

"I know you can hear me," the voice in her head went on, "so would you kindly reach your hand over and switch those awful halogen offenses against nature off?"

Before she knew what she was doing, she had turned off the headlights. The engine still purred, which meant the running lights were still on, but the light was gone.

Seated at one of the tables in front of the shop window was a tawny skinned man with smooth, dark hair and a pair of silver framed glasses perched on his nose.

"Why, thank you," the voice in her head said.

The man at the table have a short nod and turned his attention back to the steaming cup at his table and the book lying open before him.

After what Maddie had just gone through, even that bizarre exchange took a moment to seep into her thoughts as something that had actually happened and not a figment of her overactive imagination. Her attention was fixed on the phone still clutched in her hand and the news she had just gotten.

The tears welled up in her eyes again, though if asked she would never be able to explain where they came from. She had never really known her mother, so her passing shouldn't have made much of a difference in the overall jigsaw puzzle of her life. Still, something about the monotone announcement in 4G clarity had started the waterworks.

It hadn't even been a call she had taken. It was a voicemail.

An irate part of her wondered if whoever it was had any manners. That wasn't the sort of news you left in a voicemail!

But the anger looped right back around into knowledge that her mother was dead, and she was still crying.

There was the voice again, but the tone was different. There was less crackle of annoyance, and more warmth of sympathy.

Which was absurd, because she was ascribing emotion to a voice in her head. That was past visiting crazytown and right into buying property there.

Rather than rise to the bait, she leaned her head against the steering wheel and told herself firmly that the voice wasn't real. She thought that if she tried hard enough, she might just be able to convince herself the message was a fake, too.

"Yeah, well, YOU'RE A VOICE IN MY HEAD!" she screamed at the dashboard.

It felt good to scream, though it left her out of breath.

A tap on the window snapped her attention from the moulded plastic interior of her sedan, and she looked up to find the man from the coffee shop table bent down and looking into the car window.

He had shockingly bright green eyes.

She stared, and her breathing evened out. She felt calmer.

He tapped the window again, motioning for her to lower it.

She lowered the window on autopilot.

"You'd probably better turn the engine off before you run out of gas," he said.

He had the kind of voice that stayed up late to put you to bed properly.

She stared. Men like this didn't really exist, did they?

"Whose thrall are you?"

"Let me ask this another way," the green eyed man said, tucking a smooth wave of hair behind his ear. "Whose service are you in?"

Madeline could hear him in her head, but his lips hadn't moved. She stared at him in confusion, again, and tried to figure out if that had really just happened.

"If you're aware enough to doubt your sanity," the man said, "then you aren't crazy."

"That's not saying much," Madeline replied.

"No, it isn't. You follow simple instructions, but you fail to answer basic questions. That's... curious."

His lips pressed together and he frowned. "It makes perfect sense," he insisted. "If you can hear me then you have to be a-" He stopped before finishing his sentence. His eyes flashed.  "What's your name?"

His eyes, which looked blue up close, narrowed as the lie tumbled carelessly from her lips. "Do you always do that?" he asked.

"Do what?" she asked in reply.

"Lie convincingly with a straight face."

Being caught in a lie was no more appealing when the one who caught her was alluring than it was otherwise. Madeline turned away, looking across the passenger's seat.

"Should I take that as a yes?"

"You could explain why you even care," Madeline replied. "Or who you are. Or what you are. Normal people can't scold me inside my head!"

"There is far more to being alike than looks," the man replied. "Thoughts, feelings. There is a profound amount on the inside of a being to be considered. In the vast contents of ourselves, we are similar. What face you wear is an afterthought."

As he spoke, the car and the darkening sky faded away. He smelled like cinnamon and freshly ground coffee. The longer he spoke the more Madeline felt she was seated on a couch somewhere with a blanket and a cup of tea rather than red-eyed behind the wheel of her seventh-hand sedan. This wasn't normal, and she knew it, but it was so much better than where she'd been and what she'd been dealing with that she gave in to the hallucination.

"You don't wear a face," she said, sipping the tea. It was hot, but the right kind of hot that sank into her bones and warmed her from the inside out instead of the kind of hot that burned her tongue and left a foul aftertaste for days.

"These bodies," he said, leaning back in the arm chair he was seated in at the end of the coffee table, "are just containers."

"It's a fancy way of that thing that went around the internet," he said. "How did it go? Ah. 'You're a ghost riding a meat coated skeleton made of star dust.' "

It wasn't the whole quote. The last part of it nagged at the back corner of her mind.

"If someone took away this thing," he said, gesturing towards the form of her folded up on the couch, "would it be the same as taking away you?"

"Are you asking if I'm religious?"

"No," he said, chuckling, "that would be a wasted question."

"The more you say things like that, the more I know I ought to be disturbed by you."

"No. I know, logically, that this is a hallucination. Either you've hypnotized me or you're some kind of magician, but this isn't real," she said. She lifted the teacup, taking a long inhale of the scent of the tea. "No one makes a cup of tea this good."

"No one but me, perhaps," he replied.

The whole of everything went out of focus, like a stream that didn't have enough bandwidth, and then the colors went off, and then there were no colors at all.

She blinked, and behind her eyes there was static.

When she opened her eyes again, she was back in her car. The green or blue eyed man with his posh glasses was absent. The window of her car was up.

The engine was off.

Her cell phone was still in her right hand. The screen was lit and the voicemail was playing.

"-is dead. The body was transported to South Bay hospital. Call before you-" She cut the recording off. It was an awful recording, not quite monotone enough, almost chipper sounding.

Madeline took a deep breath, closing her eyes to see if she could bring back the man and the couch and the blanket, but when she opened her eyes she was still in her old, shitty sedan. "Apparently that's a side-effect of grief that they don't put on the tin," she said to herself.

With a sigh, she took the keys from the ignition and began buttoning her coat up so she could head into the coffee shop to caffeinate.

Her elbow bumped the travel mug in the center column, which was strange because she didn't remember owning a stainless steel travel mug, certainly not one with a lavender flower pattern on it. The last passenger she'd had in the car was Daisy, and for all her quirks she didn't ascribe to expressive accessories when it came to her caffeine. The mug leaned, making a liquid noise as it settled.

Curious, Madeline opened the the top.

The most delicious aroma she'd ever smelled wafted from mug.