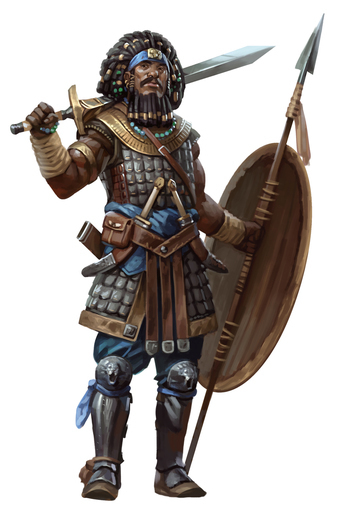 A Treatise for the class everyone has played; the question is: Can it be played better?

The Fighter class is by far the most common of classes. The Fighter is one of two classes available to every race and unlike the Thief does not need entry into a school or academy, there is an ease to which the profession can be taken up. From the lowliest peasant to the mightiest of kings, the Fighter Class is open to all.

For the Players, the Fighter is the muscle and bone of the party, the class brings versatility to a group. With a strong back and quick arm, the Fighter can overcome many obstacles.

In this treatise, we explore the world of the Fighter.

For players choosing to play a Fighter class either as a demi-human multi-class or a single class, there are many pre-conceived ideas that need to be set aside, and the Player needs to gain an understanding that the Fighter is a combination of mechanics with perspective.

Strength is the primary Character Ability score, and with a minimum of Strength 9 and Constitution 7, the occupation is open to many who fall outside the other class requirements.

The core bonus in being a Fighter occurs when the Strength score reaches 18, and a secondary roll with percentile dice is made to calculate ‘exceptional’ Strength; the other bonus is that Constitution ability scores of 17 and 18 add more HP per die than to non-fighter classes.

For many players, it becomes clear that high Strength is a necessity to be a successful Fighter.

It’s time to revisit the idea of perspective. In a ‘normal’ AD&D setting, the average ability score falls in the 9 to 12 range.  This 9 to 12 makes up almost 50% of the values made by a 3d6 roll. Ability scores of 15+ are in the top 10th percentile of the population, 16+ are the top 5th percentile.

As Player Characters, the characteristic scores are often made up by rolling four six-sided dice and discarding the lowest value. This creates a skew to a slightly higher average for Player Characters. It is not uncommon for players to roll up scores no higher than 14 and 15 and think these values are ‘bad’.

This seems especially true in terms of Fighters, where the obvious need for a high Strength, Dexterity, and Constitution scores are immediately beneficial. Exceptional Strength bonuses already mentioned, from ability scores of 15 and higher, Constitution provides +1HP per hit die and Dexterity provides -1 adjustment to AC (to a maximum of -4 defensive bonus).

It all comes down to perspective and mechanics.

Looking at a 1HD monster (such as an Orc), the monster hits AC0 on 19 and inflicts damage based on weapon type; a 1HD monster has 50% chance for 3 to 6 HP. There are many who feel if the Fighter can inflict 4 to 6 HP damage as a minimum then they ‘win’ more often.

Is the Exceptional Strength all it’s cracked up to be?

Fighters automatically become better at hitting as they increase in experience, for every level a Fighter increases an additional point is knocked off the ‘to hit’ required value. At 2nd Level, the Fighter hits AC0 on 19, and by 5th Level ‘to hit’ AC0 requires 16. That pesky Orc from earlier has an AC6, at 1st Level the Fighter hits 14+, and at 5th Level hits 10+.

Special Note: Monsters have a better ‘to hit’ chance because they have lower HP on average and often limited AC values. Example: A Gnoll has 2HD, AC5, the Gnoll hits AC0 on 16, they also have an average of 9HP. Gnolls are large creatures with a standing height over 7 feet. An encounter of 4 to 10 Gnolls is considered to be an encounter for a party of 3rd and 4th Levels.

Having a high Strength score sounds nice, however, having either a high Dexterity or Constitution is better as both abilities amount to keeping the character alive for longer.

Example:  A 1st Level Fighter wearing chain mail armor (AC5): The Hobgoblin hits the Fighter on 13+, an Orc 14+, Goblin 15+, and Kobold 16+. Hobgoblins and Orcs usually damage with 1d8 (long sword) and Goblins/Kobolds are d4 or d6 (daggers and short swords); a 5th Level Fighter with AC5 will be hit with the same values, however where the 1st Level Fighter has an average of 4HP to 7HP the 5th Level will have approximately 30HP and take it as much as dish it out. If that high ability score was on Dexterity, the AC could be as low as 1, and HP can be as high as 14 for a 1st Level with Constitution 18.

The Fighter begins with less than ideal Saving Throws, but as the levels increase, the Fighter becomes more resistant to the hazards of the AD&D world.

At 1st and 2nd Level, the Fighter's Saving Throws:

For the most part, Demi-human Fighters will be dual classed with a more racially specific class (example: Elf Fighter/Magic-user, Halfling Fighter/Thief). This is true for two main reasons; Demi-humans often have limits to their Fighter levels and they are beings who age differently to Humans.

The primary drawback to multi-class fighters is that they are half d10 for HP. The benefits of multi-class Fighters are: better weapon proficiency, better Combat Tables, access to 17 and 18 constitution HP bonuses, and options on saving throws.

For the Dwarf, Constitution is the primary statistic as the increase to 19 allows for +5 HP per hit die, and any ‘1’ rolled becomes ‘2’ (minimum of 7 HP per level). Therefore, with a limit of 7th or 8th Level, that allows for +35HP or +40HP from Constitution bonuses alone!

Fighter/Thief multiclass provides a maximum of 8HP at 1st Level before Constitution bonuses, and once the Fighter limit has been reached, the Levels of Fighter/Thief will most likely be 7/8; the Character’s ‘to hit’ AC0 is 14 (the same as a 13th to 16th Level Thief). The d6 + HP Bonus divided by 2 still provides solid HP increase for several Levels to come before the +1 HP per level after 10th.

The Elf has a racial bonus of +1 ‘to hit’ with bows (not crossbows) and both long and short swords.

As a single-classed Fighter, the Elf will rarely attain levels higher than 6th as the Dexterity score is always going to be a priority over Strength.

Fighter/Thief options for Elves is a solid requirement, their racial ability to cause surprise when alone or away from the party and in leather armor, and the Fighter/Thief gets all the toys from being a Fighter. The HP are solid allowing for up to 8HP at 1st Level, and the Thief progression allows for a constant ticking over of 1 to 3HP every level.

Fighter/Magic-user/Thief multi-class is really a Magic-user/Thief with no weapons limitations and good Combat tables. Starting HP have a maximum of 7HP, with an average of 4HP at 1st Level. The splitting of the X.P. is the hardest pill to swallow, and the F/M-U/T character is always 2 Levels behind everyone else. On the positive, the flexibility of skills is breath taking. The Magic-user element more than likely peaks at 9th or 10th Level, and the Thief HP keeps moving on.

SPECIAL NOTE: The 5th Level fighter ‘to hit’ is equal to the Thief at 9th Level and the Magic-user at 11th Level.

The Gnome Fighter class is better suited to be multi-classed with the Illusionist or Thief. The Gnome Fighter/Thief is in essence a robust Thief. Those additional HP at lower levels improve the Thief’s chances of survival.

The multi-class Fighter/Illusionist makes the Fighter class more tricksy , allowing the Fighter to suddenly throw down some magic as a distraction.

The Half-elf Fighter stops progression just before the ‘build-a-domain’ part of the career. This stresses how much the half-elf wanders and avoids settling down. As a multi-classed Fighter the combinations are of almost every combination possible (except Assassin multi-classing).

The half-elf is a jack of all trades and master to none. The Cleric/Fighter/Magic-user is proof of that. A healthy dose of Clerical ability to serve the low levels, some magic wielding to fill the middle levels’ offensive line, and a strong arm to act as backup when needed. Maximum of 7HP at 1stLevel, and an average of 4HP to start, the C/F/M-U packs a punch. The trade off being that like other triple classes, the character is two levels behind everyone else.

In a similar vein to the Dwarf, the Half-orc with Con19 gains +5HP per Level and a range of 7 to 15HP per level.

The Half-orc character choosing to shy away from the 'evil' persona (read: Assassin), will be a single class Fighter. Multi-classing as a Thief provides a limit to (most likely) 6th Level Thief; the Cleric level limit is 4th Level; leaving only the Assassin as the most viable go to for multi-classing.

The Half-orc Fighter will always get to 10th Level (assuming they survive), which also puts the Half-orc in the ‘build-a-domain’ category. Aside from the Dwarf with Strength 18, the Half-orc joins the Human Fighter in this capacity, the Half-orc is in special company.

The single-class Half-orc Fighter when dealing with NPCs, ought to be mindful of the Racial and Charisma limitations, particularly true when building a stronghold. Making a safe space for five new best (non-Half-orc) friends can always be a struggle when you’re a Half-orc trying to do the right thing (channeling Sheriff Bart from Blazing Saddles).

Like most Human classes, the character is in it for the long game. Possessing at least Strength 16 may be worth it as the 10% X.P. bonus pays off at higher levels. Constitution bonuses pay off over 9 levels of hit dice.

To look at the benefits of being Human, the player needs to look at the key benefits to being over Level 8 (most demi-humans don’t reach past Level 8). The stronghold construction at Level 9 or so, the automatic attraction of a body of men-at-arms, and the multiple attacks per round. 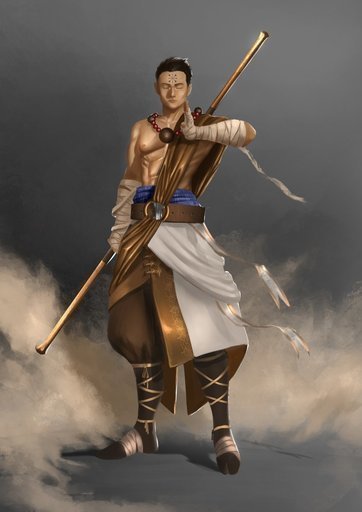 An exploration into one of the most unused classes in the game. 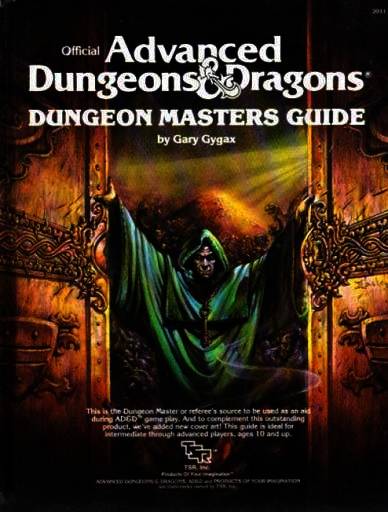