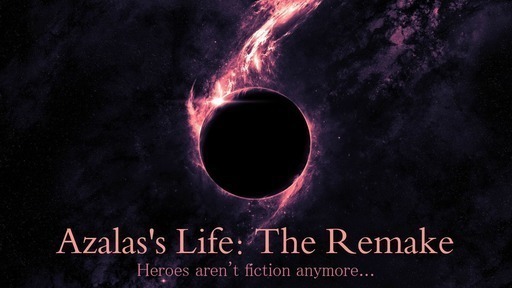 41 Reads
0 Favorites
Get the App

Are heroes just a work of fiction?...Or are they more than that? There is an evil in every known world in the universe, and with evil a hero is born... In 2007 heroes won't be fiction anymore, the universe will be tainted from a device that caused people to aquire superpowers. Some turn into villians while others turn into heroes...The energy from the device lingers in the air around the entire world, invisible to the naked eye...The day the device went off...Our heroes and villians... ...They can feel it in the air tonight...

Azalas Valentine - The main character in the story, an orphan who lost his parents to a hitman when he was a kid. He made alot of friends at the orphanage, including his best friend in the world, Marcus. After the corrupted caretaker mysteriously left the orphanage in 2008 Azalas took it over.

Nova - When she was 17 years old, Nova was sent to the Alyan orphanage where she met the new caretaker, Azalas. She decided to become an assistant caretaker, along with Marcus and all the other adult orphans. Novas and Azalas's friendship is unbreakable.

Josh Welts - Azalas's childhood doctor ever since he was a baby. Josh delivered Azalas when he was being born. This man has been like a father figure to Azalas ever since his parents died.

Liam Hawthorne - Azalas's high school friend, He tends to smoke marijuana every now and then to clear his head. He is a good friend to Azalas, they usually study together at his house or the orphanage.

Dawn Serenity - A scientist in the Otherverse, Dawn has been working on a device designed to teleport people to other universes.

Gabriel Ernest - Dawns boyfriend, he volunteered to test out her teleporting device, it malfunctioned and he never returned after being teleported.

Raymond Fich - A scientist of another company in the Otherverse. He and Dawn are working together to find Gabriel.

Lial Hanser - A government agent in the X-Verse, he teamed up with a german scientist to create a device meant to eradicate a deadly virus...Lial hanser and the german scientist were never seen again.

Fredrick Von Keisler - A german scientist who had a masters in Advanced Physics. He teamed up with a government agent to create a device to counterattack a deadly virus that caused people to turn into a walking zombie. The scientist and the government agent went missing the day they used the device.

Christopher Sangrum - He is the leader of a multi billion dollar company called Shadow Guard. His intentions are unknown to those not involved in his scheme

Daniel Valentine - Azalas’s older stepbrother. He killed one of his own family members and lit a building on fire, he is currently missing from prison and is deemed highly dangerous

Dawkson Reeves - Sangrums right hand man and the leader of Shadow Guards security forces. He is a man who is both dangerous in close and long range combat.

Glitcher - The main villain in the story. He came from another universe and learned his power from The Keepers. He plans to take over the universe that he’s in and control the world

Franklin “Frankie” Deluca - The head of The Deluca mafia family. He hired a hitman to kill Azalas’s parents when Azalas was a kid. Frankie is a personal enemy of Azalas and his family members and friends.

Samuel Reynolds - The British hitman that killed Azalas’s parents. He is a notorious criminal who is wanted by The STF for using his powers of telekinesis to throw a man out of a window on the 5th floor of a 20 story skyscraper

Adrian Vice - An ex government official who had the right side of his face burnt due to a car explosion from a battle with a hero. He now vows revenge to eradicate all superhumans and make the world a "better" place for all humans

Truman Mirada - The mayor of New York and leader of a superhuman hate group called MAMMON. He tries everyday to shut down The STF but fails to do so.

Carsus Rayne -  The main leader of ‘The Keepers’ their main job is to keep and protect the balance of the Physics of the universes. He has caucasian skin and has hyper purple eyes. He wears. a purple and black cloak. He also has short gray hair and looks to be about in his 60’s

Ezekiel Endros - Another Physics Keeper, he is a man with dark skin and black hair. He has hyper blue eyes and he wears a black cloak

Vargos Zsasz - A man with white skin who has hyper yellow eyes. He wears a dark blue cloak. He has hides his face behind his hood.

Fayra Aurora - A girl with Caucasian skin and long brown hair. She has hyper blue pink eyes and wears red and blue cloak.

Tegner Lex - An asian looking man who has hyper red eyes. He has long black hair and a beard. He wears a black and blue cloak

Azalas’ Life: The Remake UST (Not in any particular order)

5. Rise of The Heroes - https://youtu.be/JgBY9uRXuEA

"You called me here for one of your experiments?" A man with slicked back white hair and a goatee asked, he ran his left hand through his hair and breathed out air from his mouth.

A woman sitting in a leather swivel chair with long dark hair and glasses was nodding. "Yeah...I think I found out a way to enter other universes! This will be the find of the century!" The lady said to the man. She picked out a sucker from a candy jar that held contents of all sorts of delicious candy. She unwrapped the sucker and threw the red wrapper into the blue plastic trashcan right next to her desk where she was sitting at.

"Again? We talked about this Dawn. You keep on delving deeper into stuff about black holes and wormholes...You'll be consumed to the point where you'll just end up killing yourself!" The man said as his expression changed from a blank look to a look of worry and anger. He looked at the machine that was in the middle of the room. "What in the world is this?" He asked her.

Dawn continued to eat her sucker. She turned towards the machine in her swivel chair and smirked. "It's called a P.T.T. Which is also known as a "Physics Tangent Teleporter. Otherwise known to teleport you to other universes." She said picking up a can of soda from her desk and taking a sip. The cool refreshing soda was all she needed on this hot summer day of June. Dawn put the can back down on her desk and got up.

"How do you know if it works?" The man asked. He walked towards the machine and ran his left hand down the cool smooth metal surface on the machines side. In the center was a leather chair along with wires.

Dawn looked at her boyfriend and smiled. "I don't...I haven't tested it out yet. Been too scared to." She said.

"How about I test it for you?" the man asked her.

Dawns expression changed to surprise and concern. "Are you out of your mind?! Who knows what could happen to you Gabriel!" Dawn said as she also walked towards the machine. She touched Gabriels shoulder and looked at him. His white hair shined in the sunlight from the large window behind him at the back of the room.

"Someone has to test it out Dawn, either it is tested or the big guys in black will take away your damn machine!" Gabriel snapped at Dawn. Her eyes became wide and almosf teary eyed. "Oh babe...I'm so sorry for snapping at you...I just don't wanf to see your work go down the drain." Gabriel told her hugging her.

Gabriel shook his head. "What if I lost you?...I couldn't forgive myself, I rather me go instead." He told her.

"If I get stuck in another universe...I might as well be the almighty god of that universe." Gabriel joked and laughed. Dawn didn't take the joke funny and smacked him upside the head.

"Fine. But I want you to promise me...If you do get stuck in another universe...Please be okay..." Dawn said as tears streamed down her porcelain white face. Her purple eyes staring at Gabriel.

Gabriel nodded. He walked over to the leather chair which was the middle of the machine. He sat down in the smooth black leather chair and sighed.

Dawn walked to the console and started typing in alot of code. The wires in the middle the machine started to move, they all plugged deep into the back of the chair. "Power is at 10 percent...Rising heat levels from 4 percent to 10 percent..." Dawn said as the power raised to 15 percent.

Gabriel felt nervous, he looked at the screen right by him.

Dawn became wide eyed and looked at the console on the outside of the machine.

"Is it supposed to be in unison?! The heat and power levels I mean!" Gabriel yelled out to Dawn because of the loud noises from the machine.

"No! Gabriel get the hell out of there! NOW!!!" Dawn yelled out. She tried to stop the machine but it kept on going.

"I can't stop it! I'm stuck to the damn chair! Get out of here Dawn! While you still can!" Gabriel yelled out as well.

"GABRIEL!!!!" Dawn screamed out as she ran towards the middle of the machine and extended her hand towards Gabriel. She was crying profusely.

Gabriel reached for Dawns hand but it was too late. A bright purple light overwhelmed him and once it was gone...So was he.

Dawn felt pulled her arm back and noticed blood dripping onto the ground. She looked at her left arm which was missing a hand, the same hand that reached out for Gabriel before he disappared. "Oh my..." she said getting dizzy. She fainted from bloodloss.

"EXTRA! EXTRA! Read all about it! Illegal science experiment gone bad!" a paper boy said on the corner of Times Square