A character's birth in 1950's britain

73 Reads
1 Favorite
Get the App

We were war babies, all of us, my class at school. Although we were born some five years after the end of hostilities it pervaded the culture around us. The physical structure also. The centre of our small city had to be completely rebuilt afterwards. Most of its Elizabethan heritage had gone, as well as much of its infrastructure. The burned out shell of Charles the Second’s great church was left as a memorial, isolated on a roundabout in the middle of a new and busy dual carriageway. Its roof was gone, all of its glorious stained glass had been blown out of the skeletal windows, and the interior stone walls that you glimpsed through the ribs were black with soot. Firebombing.

Ironically it had been built as a kind of war memorial in the first place. Charles’ reminder to the troublesome puritan burgers, those who had held out for so long against his father’s forces, that the monarchy was back, and with it established religion. To reinforce his own divine right to rule he’d had erected a giant citadel on rising ground with walls twelve or sixteen feet thick at the least. Because it loomed up on the top of the Hoe people imagined that its construction had been as a protection against the Armada, but that confrontation had been some fifty or so years before the civil strife. No, they were ignoring the fact that rather than facing out to sea, all of the deep gun emplacements that punctuated the battlements faced inland, glaring out across the town.

The fortress had survived this later conflict whilst the church had burned, although wars were no longer fought even ostensibly about religion. By now only cranks were expecting the Second Coming of Christ and warfare had become naked and solely about power, about ethnic domination, and basic economics.

The town had been blitzed, even though it was quite some distance for the enemy to fly, partly because it housed an important naval dockyard and partly to demoralise the population – ‘don’t think we can’t reach you even here.’ In later years plenty of children would grow up playing on bomb sites although blissfully unaware of what they were; just overgrown patches of vacant land; a good place for a game. Following the birth of her first child, Tony, his mother and her mother-in-law had moved out to a small fishing village some fifteen miles from town. Even there bombs had dropped, some returning Dornier or Heinkel jettisoning the rest of its gruesome cargo perhaps. Tony could remember being grabbed and dragged under the dining-room table, even though he could have only been two or three at the time. It must have been one hell of a bang.

On his father’s return the little family moved into another tiny cottage just up the road whilst the matriarch, a reasonably comfortably well-off Edwardian widow, returned to her rather grand house in the town.

War can do strange things to a man. Apparently it had reduced his sperm count, for over the next three years, try as they might, no sibling arrived as playmate. There were plenty of orphans however, as well as babes born out of wedlock, and one such became a second son. It seems that this tipped the genetic balance once more, for two years later they became the proud and loving parents of a third.

The cottage was essentially just two rooms with an add-on kitchen and an outside toilet. The parents had loved it as well as the surrounding village. Amongst a group of friends they had done most of their courting there, each summer weekend camped in a farmer’s field, three girls sharing a gypsy caravan, and three young men in a tent. The ‘phoney war’ of the last glorious summer was spent in an agony of longing and apprehension, with rowing trips on the river, long walks through the woods and swimming off the little sandy beach at the mouth of the estuary. The three men enlisted in the R.A.F. together, although his parents were the only ones to marry. The ceremony took place in the local village church shortly before the lads’ departures.

The mother was used to cramped conditions, with an older brother and sister she had lived with her widowed mother through the depression years cooped up in small terraced house in the East End of London, her sailor father having been sunk somewhere in the Indian Ocean during the previous war to end all wars. He never saw his youngest. Now with three small children of her own and a husband who had to motorcycle fifteen miles into town and back again every day, up and down twisting narrow lanes, their country idyll was over. With some help from his mother they managed to raise the deposit on a modest three-bedroom house, in a staggered little terrace of four, in a respectable city street, with – oh what luxury - an inside toilet and bathroom.

So M, we’ll call him that, had finally arrived, narrowly missing the war itself but well inside its aftermath. A boomer baby, one of many hundreds. Of the country cottage of his birth he had no real memory save one, and that most likely apocryphal, for he could only have been six months old at the time. His mother certainly denied it years later when she was asked.

Real or not it had a certain psychological validity when contemplated from subsequent years. He was lying in his pram at the bottom of the garden, under the apple tree where his mother often left him to cry; this under advice from the maternity nurse and from the other women of the village, for the noise upset both her and his two brothers in their cramped confines. It was winter and he was well wrapped up against the cold. In fact it was a fine sunny day and he was gazing up at an azure sky through an intricate chiaroscuro network of snow capped bare branches and crisp, hoar-frosted twigs. Just at the edge of unfocussed sight a small figure hovered somewhere off to the side of his pram. The next thing he felt was that his face was suddenly icy cold and that wetness was starting to trickle down his plump little chin. He howled even more but no help came. 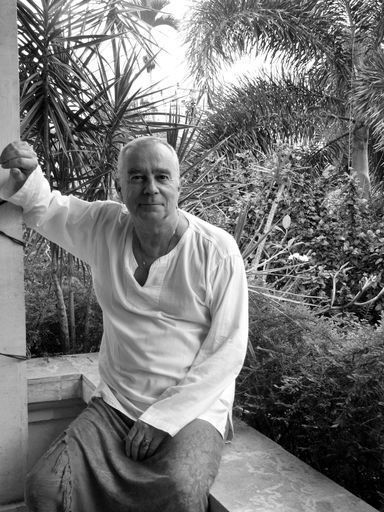 A short story of a older Australian man discovering a book on Bali that had been left in a losmen some forty years before. I wrote this some 5 years ago as a prologue for a novel I was about to write. I was then offered a scholarship by Adelaide University to do a creative writing PhD and put is aside, whilst writing the short story cycle On The Edge. I have since returned to it, renaming it The Drifter's Escape and am up to chapter six of a first draft.

A story I wrote for my PhD thesis which didn't quite make the cut because the setting of the majority is in New Zealand rather than Port Adelaide. I still like it though. A kind of deconstruction of a ghost story.