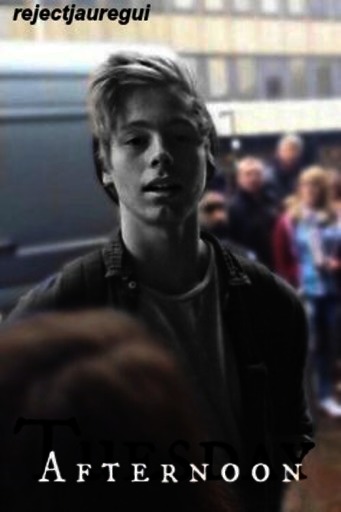 A story about a girl named Dawn Hagler who is a daydreamer and is always that shy, skeptical girl that meets a boy on a Tuesday Afternoon named Luke Hemmings ー who is the total opposite, outgoing and always alert.

56 Reads
3 Favorites
Get the App

A story about a girl named Dawn Hagler who is a daydreamer and is always that shy, skeptical girl that meets a boy on a Tuesday Afternoon named Luke Hemmings ー who is the total opposite, outgoing and always alert.

"Who is that over there?"

It was Tuesday afternoon as I was doing my frequent warm-up on the running field when I heard the familiar voice of my friend, Bri. I snapped my attention to Bri and glanced at her direction to see her point at a tall figure leaning against the gate doors that led to the running field. I squinted and shaded my eyes with my left hand from the beaming sun to observe the figure and noticed that it was a man by reason of his broad shoulders and muscled arms. I furrowed my eyebrows in confusion and felt my lips tug down into a frown.

"I don't know," I replied to Bri's question, shrugging my shoulders. I lifted my gaze away from the mysterious figure and persist my warm-up. Beads of sweat trickled down the sides of my face and I reluctantly stalked over to my sports bottle, lifting the bottle cap off before downing big gulps of water. I sneak a glance at the figure who was still in the same position as before and advert my eyes to Bri, who still stood there staring at the shadowed form of the man, a baffled expression portraying her face. I sighed and walked over to Bri, placing my hands on her shoulder before shaking her body left and right.

"Hey!" Bri shrieked, swatting my hands off her shoulders. I laughed at her before halting. The smile on my face faded when I heard a low rumble of what I assumed was a chuckle coming from the direction of the figure. Bri notices and we share glances at each other before turning our attention back to the figure.

"Alright, boys and girls," the booming voice of our athletics couch startles me, adverting my attention from the puzzling figure. "Since I'm guessing you are all warmed up and ready to go, I want you all to run 5 laps around the field."

I groan in response to the couch's statement and ready myself to start running with Bri on my tail. After running 5 laps, I halt to a stop and attempt to steady my breathing, my body weak and exhausted. I placed my hand on my chest and stumbled over to my sports bottle, uncapping my bottle cap and gulping down the rest of the remaining water left. I glanced around the field until my eyes landed on the figure that was now approaching my direction. I watched as the features of the figure got clearer and I could make out what the man looked like.

As the man got closer, I observed him from head to toe. He was tall- very tall for that matter. He looked quite fit and I could tell he worked out as of his muscles. He had shimmering, blue eyes that could melt your heart. His hair was a sandy blonde colour and was styled into a quiff and a black lip ring curled around his pink, full lips. I would be lying if I told you he wasn't attractive, because even from far away you could tell he was good looking.

"Dawn Hagler?" a deep voice said in a strong, Australian accent. I glanced up to see the man standing in front of me, a sly smirk playing on his lips. I breathed a sigh of relief when Bri stepped in.

"Who are you?" she questioned, not intimidated whatsoever. I admired Bri's confidence and bravery, something I lacked on.

"And you must be Brianna O'Murragh, the Irish hottie everyone talks about," Bri winced at the mention of her full name, as anger bubbled inside me. Who did this guy think he was? And how did he know our names?

"Who are you and what do you want?" the words slide off my tongue, annoyance detectable in my tone. I was astonished at the sudden outburst and wondered where the abrupt confidence had came from. The man just chuckles and takes a few steps forward, closing the small distance between us before leaning in. I could feel his hot breath on my face as his lips directed themselves to my ear.

"I'm Luke," he said, his voice barely above a whisper. The next four words rolled off his tongue like a threat in his strong, Australian accent, fear engulfing me. "And I want you."