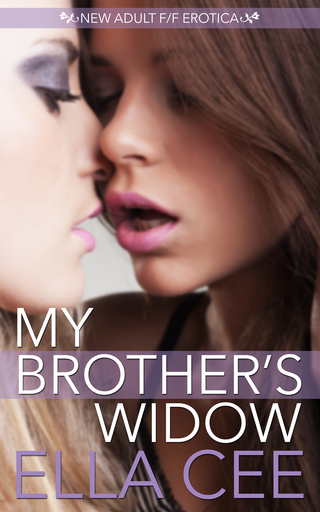 Grace didn’t mean to fall in love with her brother’s wife Noelle. When her brother passes away suddenly, Grace is sent by her family to comfort and collect Noelle. There is definitely something between them, but Grace must get past her guilt in order to pursue it. One night changes everything between them, and could change Grace forever.

The following is a sample of the short story, "My Brother's Widow." To read the full ebook, purchase on Amazon.

The content in this sample is explicit. By proceeding, you agree that you are of mature, adult age.

I didn't mean to steal my brother's wife when he died. Christopher wasn't the type to get mad at his little sister for stealing Noelle, though—that was the worst part. If he were still alive, he would shrug, give us his best wishes, and invite us out for drinks. That's how Christopher was.

Growing up, we were inseparable—even though we were separated by three years. Everyone referred to us as "Christopher and Grace," like we were a single organism. Most kids might've been annoyed by this, but I think we both took pride in it.

I promise you, there was nothing "weird" about our childhood. No touching uncles, and we didn't even share a bed. Nothing could have foreshadowed my eventual homewrecking, or Noelle's infidelity, just days after she discovered his body in the shower.

I might as well get that out of the way, too. My brother had a massive stroke during his morning shower. He was thirty-two.

I went to California to collect his wife because I wanted to be there for her. I felt like I'd lost a limb when I lost my brother and best friend, and I felt more than a little responsible for my sister-in-law. She didn't have any family out in California. They decided to live there mostly because Christopher made enough money as a lawyer to afford a house in the suburbs of Los Angeles. Noelle paid for my plane ticket, even though I resisted, until she reminded me that Christopher would've paid for me to come visit, had I not been so stubborn. So, I let my sister-in-law put my round-trip ticket and her one-way ticket on her and Christopher's AmEx, let my best friend Janessa drop me off at the airport in Hartford, and sat in a plane for several hours until, finally, I landed in LAX.

The airport reminded me of any other: big enough to hold two shopping malls, ripe with the scent of stale perfume and fast food, and packed full of people coming, going, and staying (some of them were homeless). Nothing about it particularly screamed LA, but I could easily tell who was native to the area and who wasn't by what they wore. It felt kind of surreal, seeing LA fashion so up close. All of the Hollywood stereotypes were actually true. Everyone wore expensive sunglasses and the women were snobbishly beautiful. I caught myself staring at more than a few, and had to remind myself why I was there.

Carry-on in hand, I met Noelle at a Starbucks.

"You want a coffee?" she asked from behind a huge pair of Dior sunglasses.

My shoulders slumped a little in defeat. Here I was, supposed to be comforting her, but she was already buying me things. Not that I could say no. In California time, it was 5pm, but it was 9pm at home in Connecticut. I nodded eagerly and she ordered two s’mores fraps. We took the coffees and my backpack to the car.

Once the engine was started, Noelle removed her sunglasses, hanging them on the rearview mirror. Her brown eyes were red rimmed and glassy, and surrounded by dark, baggy circles. "I'm so glad you're here, Grace," she sobbed, throwing her arms around me. I hugged her back, rubbing soothing circles into her back. Hot tears dripped down my own cheeks. I hadn't seen Noelle or Christopher since Christmas a few months before. Christopher died on April 2nd.

We sat there like that for what felt like twenty minutes, her in her Victoria’s Secret velour sweat suit, her dark hair pulled back into a messy bun. I felt almost dowdy in my jeans and Green Lantern T-shirt, my blonde hair tied back into a ponytail at the curve of my skull. Finally, Noelle pulled away, sniffled, and backed out of the parking spot.

"Well," she said as we pulled out onto some Boulevard or other, "Christopher always wanted you to see LA. To your left, some palm trees. To your right, some hipsters. Welcome to our humble home."

I pulled on a smile, and we lapsed into silence throughout the rest of the ride.

Thirty minutes and an obscene amount of traffic later, we pulled into the garage of a home that could've fit two of my parents' house—which is saying a lot, considering theirs is pretty big by Middlebury, Connecticut standards. Christopher liked to joke that he built such a successful career because Connecticut drivers suck.

"I guess LA drivers suck, too, huh?" I said to Noelle as the two-car garage door closed behind her Lexus.

She smiled wanly and stepped gingerly out of the car. "Come on in," she said.

I followed her inside, where freshly waxed floors gleamed, windows sparkled, and chandeliers and pendant lights hung from the coffered, cathedral ceilings. The air smelled of lemon and sunshine, the latter of which streamed in through the windows, striping the plush white carpet. Through sliding glass doors, my eyes drank in an in-ground swimming pool about the size of my parents' garage.

"This is a mansion," I breathed.

Buy Now for Your Kindle