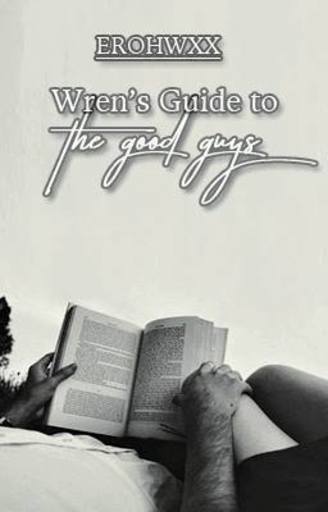 Wren's Guide to the Good Guys

My initial problem was all of the rumors being spread about me. What I wore, my scent that seemed to attract most guys to me, the number of people that have spent nights naked in my bed. I didn't mind this - it was easy. What I did in fact mind, however, was Warren Garrett and his charming ways. I didn't do the hearts, flowers, and chocolate thing on Valentine's day and I didn't cuddle after sex. I am not sure I even know what holding hands with a man is like. What I do know is that Warren Garrett was finding new ways to teach me what these things meant. That is where my guide comes from. Hear me out before you open it. I was not using...

25 Reads
0 Favorites
Get the App

So I guess our love story started like most others, jumping in before we knew what we were jumping into or how deep we'd be falling once we jumped, and scared beyond belief. But if there is something I learned in the entire time that I've loved Warren Garrett, it's that boys aren't scary, the power you give them is scary, and so is the way they can make you feel. I have slept with many men in my mere twenty two years of living, not more men than I needed to be sleeping with...just the perfect amount. Warren thought I was a perfect virgin when he met me, but I was a needy girl, and not in the emotional way, until I met Warren, that is.
So that's my story, I fell in love even though I wasn't even sure what that word meant when saying it to someone of the male species 6 months ago, I fell in love with Warren and he with me, and we ruined the beautiful budding relationship we had. I remember distinctly hating him for awhile, even imagining another guy's head between my legs...but that's a story for later. The bottom line is that Warren Garrett ruined me for all other guys, I'd never find love like him again, it made sense why I hadn't found men before...Warren was put on this Earth to torture me with his long brown hair and boring blue eyes. Though...his freckles are nice and he's to die for in bed...don't mention the thing about the eyes, okay? He'd freak if I thought his eyes were boring and...well...I actually love his stupid ugly blue eyes, but only when they're looking into mine. I am not a sappy bitch, by any means, I hate romance. I hate cards and flowers and chocolate on Valentine's day, it's not even a real holiday and everybody knows real holidays the whole world shuts down for...Christmas, Thanksgiving, etc, and some establishments don't even shut down for those. Valentine's day was not one of the important holidays...but Warren brought me flowers a card and chocolate like an asshole on that day.
I may or may not have stomped on the flowers in front of him and then started crying like a baby and letting him hold me and run his fingers through my hair while I ate his deliciously stupid chocolate. I don't know how long I tried convincing myself he was just another guy I was going to sleep with before he actually got me to admit I was in deep, mad, stupid love with him. Actually - don't mention that I called our love stupid either, he'd probably hate me for that one, too.
So this is my guide to the good guys we come across in life. I will be writing the in's and out's of a relationship with a good guy. Things girls need to know, like,

My guide will help out all kinds of girls, and maybe even a few guys. In the meantime, I will have the biggest struggle of them all...Warren Garrett and his charming ways...I was not caught up on Warren Garrett, I couldn't be. I was Wren Taylor, I did not get caught up on boys.