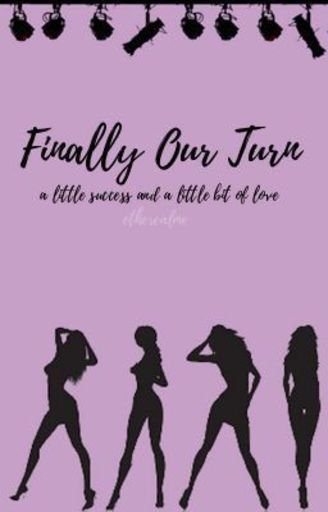 Laila Grahm had no idea what she and her three friends would be thrown into when 5 Seconds of Summer asked them to tour with them.

Hello and welcome to my story!

Finally Our Turn has been a story for years. Seriously, since 2014. It was written, taken down, and rewritten, which is the version that you'll be reading now. I'm proud, at least prouder, of the rewritten version of it than I am of the original copy, so I'm putting it everywhere I can think of. By that, I mean it's up on both Wattpad and Quotev if you'd rather jump on over there.

I'm going to stop giving you the boring backstory of how this came to be and let you get on to the reading.

The girls and I were all meeting up at Melanie's house, as per usual. This was a common occurrence for almost every afternoon, as we had to practice and get a cover up on YouTube once a week. I was at my house getting ready to leave to head to Mel's. As I walked out the door, I spotted my mom outside gardening. I debated on whether or not I really wanted to go talk to her, but before I could sneak off to my car, she spotted me.

"Where are you off to on a school night?" she questioned. Funny, she's actually trying to act like a mother concerned for her child's education - or her child at that.

"I'm off to Mel's," I bluntly responded. She told me it was okay to go, as if I asked for her permission in the first place. I turned on my heel and walked away with the roll of my eyes. As I pulled out of the driveway and turned on the radio, Amnesia by 5 Seconds of Summer filled the car. I turned the volume dial a little, their soothing voices accompanying me on my way to Mel's house.

I pulled into Mel's driveway, her large house intimidating me in my small car. No matter how many times I've been here, the size of her house still amazes me. I'm not going to say my house isn't large as well, but her's was a good size bigger than mine.

I stepped onto the hot asphalt and immediately threw my pearl blonde hair into a messy bun, not wanting to deal with the Florida heat and humidity today. As I tugged my hair up, I started walking towards Mel's garage where our recording sessions usually took place. "Hey guys," I greeted as I secured my bun on top of my head.

"Hey Laila," I received from Sasha. Her caramel colored hair was thrown up into a bun as well, the heat not only getting the best of me. The other two girls were laying on their backs, arms up above their heads.

"Can we take a rain check or something?" Ariana suggested as she sat up. There were beads of sweat matting her charcoal black hair to her pale white forehead. For a Florida native, she really had some light skin. "It's so hot out here."

"Nope, no rain checks," I replied, tugging the fan out from the corner. "Mel, where's an outlet?" I asked. I needed this fan up and running if I were to survive this heat.

"Here Laila, I got it," she responded as she stood up from her previous spot on the ground. Her shorts and tank top showed off her tanned, olive skin. She didn't even need a tan and she got one, while I was over here looking like The Ghost of Christmas Past without one.

A half an hour passed and the four of us still accomplished absolutely nothing. We needed to get this cover up and running if we were to get our promised cover up on the internet today. "Guys, we need to get to work," I said as I stood up from my spot on the ground. I wiped any dust off my butt and set up the tripod and camera. "Up and at 'em! Let's go." I walked over to Sasha and tugged her arm in an attempt to get her up off the floor. I pulled on her arm and struggled to get her up, falling on my butt as a result.

"It's so hot, Laila," Ari whined. Her wild curls were spread out around her head as she complained. "Can't we just lay here for a little while longer?"

I trudged over to her and bent down in her face, her dark green eyes staring straight into my cerulean blue ones. "No can do." She groaned as she sat up . "Guys, imagine it's our first concert but it's one hundred degrees outside. Imagine we're so close to performing in front of hundreds of people but we say 'Oh hell no, it's too hot today. Maybe next time.'"

"You make a valid point," Mel says as she pushes herself up from the ground. She clapped her hands together rubbed them, immediately grimacing as she wiped the sweat from them onto her shorts. "What song do you wanna do?"

"End of Time by Beyonce?" Sasha suggested. "As her fellow light-skin, I feel we need to pay a tribute," she joked. "Also, we've been talking about putting this cover up for a while, so why not now?"

I nodded and said, "Sure, I'm down." We had practiced the song for a couple of times, so it only made sense to put it up. "Any objections?" Nobody spoke so I flipped the camera so it was facing us and swung out the small screen, making sure all of us were visible to the camera.

We harmonized and matched pitch, doing a few quick voice warm-ups before Sasha turned on the camera and counted us off.

We all started off together, a perfect blend of harmony coming together. We were all snapping our fingers in time, and immediately after the chorus, I sprung into my solo. After a few lines, we all came in one at a time, adding harmony for a little bit of pizazz. We split off into another solo yet again, Ari coming in strong. The chorus looped back around after her solo, us all joining in and harmonizing yet again. The chorus ended followed by another solo, this time it belonging to Mel. After her small solo, we all joined in again, immediately breaking off for Sasha's rap verse to shine. We added a few small harmonized 'ohs' before the rap continued, Mel jumping in to assist. We brought the 'ohs' back once again before going into the perfectly harmonized ending, the song coming to a close in no time.

"Well, that was fun," Sasha voiced as she finished our outro and turned off the camera. "I mean, not like it isn't always fun." She folded up the tripod and held the camera, nodding her head towards the actual house. "So, ya'll want to go upstairs and get this edited and uploaded or what?" We nodded in agreement and grabbed our phones, heading up to Mel's room.

Once we were in Mel's room, she pulled out her laptop and plugged the camera in, us all gathering around to help with the editing.

"Mind if I throw on some music?" Ari questioned. She didn't get a response but she stood up from the bed and threw a CD into the player, Unpredictable by 5 Seconds of Summer coming on.

"Man, I find myself listening to them a lot," I said to no one in particular.

"They are your favorite band, they follow you everywhere," Ari answered as she joined us back on the bed, wiggling her fingers at me eerily.

"Our favorite band, actually," I corrected.

"Oh sure, if you just must go into specifics," she responded with the roll of her eyes. I giggled lightly before turning my attention back to the video we were to be editing.

After a good two hours of us just hanging around, we decided it would be best to turn in for the night. I offered rides to anyone who walked here because we lived rather close, but I was rejected by the two who would be in need of a ride. Sasha was going to her house where Jordan, her boyfriend, would pick her up from her place and bring her over to his place. I offered, but she said she needed to grab some clothes from her 'abandoned home' before heading out. It wasn't abandoned, it's just that her dad worked the night shift and her sister took night classes. Ari drove here so she swiftly turned me down. I suggested for her to ditch her car and spend a grand time with me, but she just laughed and grabbed her keys.

I said my goodbyes and hopped in my car, heading off to my house. Once I pulled into the driveway, my dad stepped out of the house in his pajama bottoms and slippers. I sighed, as I knew he was waiting up for me.

"Hey, Dad," I skeptically greeted. "How was your evening?"

"Hah, very funny Lai," he joked, knowing I was just trying to get out of trouble. "Where were you? It's eleven on a school night! You should have been home half an hour ago."

"I know, I know," I responded, knowing my curfew was ten-thirty. I was just hoping that he wouldn't be home and Mom would have the house to herself, knowing that she wouldn't care what time I walked through that door as long as I was alive. A great parent, really. "If it makes you feel any better, I wasn't with Ryder this time." The corners of his mouth turned downwards and I smiled sheepishly. He would have been furious if he found out I was out with my boyfriend this late, so it's better to rid the idea of his mind.

"Get to bed, Lai," he ordered. I sighed but nodded.

"Alright, alright. Just, let me go say goodnight to Abbie first." His eyes softened at the mention of my baby sister and his youngest daughter. He gestured up the stairs and I kissed his cheek before quietly bounding up them, not wanting to wake her.

I peeked my head through her doorway, careful not to make a sound. I heard her peaceful, even breaths and smiled contentedly. I'm glad she was asleep - that means Mom and Dad weren't up fighting again. A happy house is a happy me. I tiptoed over to Abbie's bed and placed a soft kiss on her forehead, whispering a small "Goodnight munchkin" before sneaking out and to my room.

Once in my fortress, I tugged off my shorts and bra and threw on an oversized shirt that I stole from my dad. I turned off the light and snuggled into bed, grabbing my phone and checking for any missed messages. I saw one from Mel to our Awaiting Winter group chat and chose to ignore it, as I had a few missed texts from Ryder. I responded with a 'damn you're impatient.'

I raised my eyebrows at his reply. 'Call me a booty call again, Ryder Harrison, i swear to god.'

A few minutes passed before my phone lit up with 'sorry baby, you know I was just joking.' He added a little kissy face and I rolled my eyes at his fail at charming me.

I rolled my eyes yet swooned at 'babygir'l and plugged my phone into the charger, rolling over and closing my eyes for a good night's sleep.