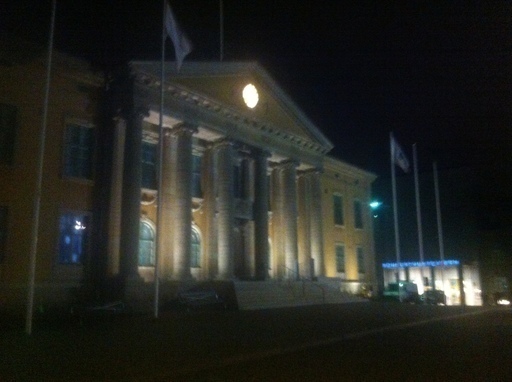 Show me your world

Two girls find ways to communicate on a bus ride in Italy.

Saga could feel the bus moving underneath her before she’d even found a seat. Her eyes scanned the area and it was clear that she would have to pick someone to sit next to. Not far from her, she could see a girl her own age, dark hair, red lips and with a sketchbook in hand. Saga had found her target and after getting a polite nod as an answer to her pleading look, she struggled trying to fit her suitcase underneath the chair and sat down.

After a few moments of awkward silence, the girl turned around and asked her something in fast Italian. Having had a few ineffective classes of German in school, the words meant nothing to her.
“I’m sorry, I do not speak Italy.” Saga tried in English, as the likelihood of the Italian girl knowing Swedish wasn't very big.
The girl with the red lips looked chocked and shook her heard violently. “Oen momento” she laughed and Saga waited patiently as she grabbed some colour pencils from her bag and started drawing.

It felt rude to stare at her notebook, but so did looking away and Saga decided to watch the drawing develop in intervals, looking away most of the time. The girl was soon done and Saga received a sketch featuring a suitcase just like hers, followed by an arrow and a question mark.
“You asking where I going?” Saga tried but the girl continued shaking her head saying “No, no, disegnare!” giving Saga her pens. “Disegnare.”

So Saga took her pens and drew another road sign, filling in the name of the city where she was going. She then drew a sun, and a pizza, although she wasn’t the best artist and it looked rather childish in comparison,
“Jag kan verkligen inte rita, men ja, okej.” Saga laughed and gave her back her notebook, fully aware that the Italian girl wouldn’t understand what she just said.

The next drawing was of a dark haired girl sitting in a suitcase underneath the same road sign as Saga had drawn moments earlier. When Saga giggled and nodded, getting ready to answer with another scribble, the girl took the pends again, continuing her drawing with an exited look in her eyes.
A house that said home and a line between the sign and the new addition with a small 20 min written above it. Once again Saga thought that she finished, but she drew a face with bright red lips and instead of continuing to draw the top of that head, there was something like a map folding out of it. The drawing was quick and messy, but Saga was rather sure that he got it right.

So Saga drew a magic carpet, and hoped that the girl got the reference. When the girl added the two of them on it’s back, Saga knew, she did. So she wrote down her name and the girl wrote Laura right next to it.