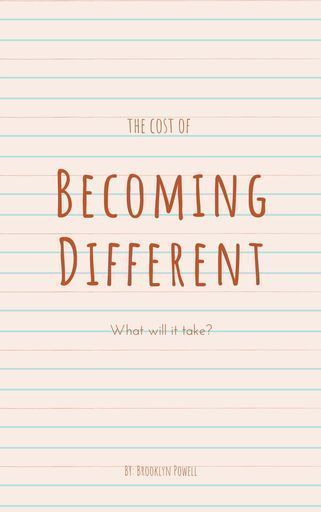 “Merci… I know you’re in here, I can smell you from miles away.” I heard her tentacle-like appendages slither around the room, seeking out any form of heat. Her eyes scanned the room, but she couldn’t see anything. Everyone knew her sight was stripped away when she was but a child.

My lungs heaved with every breath I took as I tried so desperately to shrink further along the walls of the wardrobe. Finally, my throat constricted with a gulp, and it was silent.

“Are you excited, Merci?” Of course I was excited. What kind of question was that? Today was the day I would find out what kind of person I am. What kind of things I can do. What I am capable of. Mother had made me promise to be accepting of my abilities no matter what they are, but I was going to be disappointed if they weren’t different from the ‘family trait’.

You see, my family was a very basic group of people. Most of us- aside from my brother, and God knows where he is- had the ability to mold things to our will as long as they weren’t living or breathing. Very basic compared to most of the other families at my academy.

“Yes, mother, so very.” I responded, hoping she would stop pestering me for a while. To my excitement, she clapped her hands with a giggle.

“Oh, well isn’t that amazing! Berry would be so proud of you.” She beamed, grabbing me by the shoulders and swiping my bangs out of my eyes. Berry was my brother. I suppose he still is, if you could call a traitor a brother.

“I’m sure he would. In the meantime, I’m going to head towards the academy, just to get a head start in saying goodbye to everyone.” Mother nodded, and I wasted no time in rushing out the door.

The humid air rushed towards my face when the door was swished open. Honestly, it was a beautiful day outside. It’s a shame… if only Serene could experience the wonderful gift of sight.

Serene was a beautiful girl with which I shared many classes. We both dabbled in the arts of witchcraft and spirit work, making us friends almost immediately. You see, unless you’re born West of the border, you don’t really meet too many people who love to contact the spirits. The ‘Westies’ had a very strong relationship with the spirits because they were saved by them, whereas the ‘Easties’ were exiled by them because of the overpopulation issue brought up in 2010. Even though that was around 200 years ago, a lot of us on the East side of the border still hold a grudge, hence most people’s reluctance to speak to them.

Personally, I think it’s a pride issue. The spirits are very wise, and if you speak to them enough, you might be able to score a trip across the border and into a better life. You could also cross the border if they find that you have an extraordinary ability, but that’s so rare it’s only been seen in the case of- right. I rolled my eyes.

Knock, Knock, Knock. The warmth that engulfed my body as Serene opened the door was calming, and I sighed.

“Hey, Serene.” Her smile was soothing, her hands were soft, and even if she was different- the black spots littering her skin let everyone know she was- she was still the person to make a rainy day still seem fun. I really did like Serene… maybe- no. Unacceptable.

“Merci! Are you excited? Well, sorry, that’s a stupid question. The real question is how excited are you, scale of one to ten? For me, I’m a solid eleven. What if I get the ability of foreseeing? Then I can see all the things you describe- I can finally put an image to the short, prickly sticks on the ground that you call ‘grass’. Oh, it’d be wonderful, wouldn’t it? Just to look around and finally be able to see- oh, it’d be fantastic.” Aside from her astounding demeanor, Serene was- despite her name- very bubbly, and when she got nervous, she’d ramble. Sometimes she’d pick at her black spots, too. I suppose these are all things you learn after being friends with someone for as long as we have.

“I’d say I’m an eight, at the most. Can you believe it? After all our training, today is the day we find out what it all leads up to. What if we both get to go outside the Eastern border and into the Western one? I wonder what it’s like…” Serene sighed as I spoke, bumping into me.

“Merci, you know what it’s like over there. Paradise.” Wind whipped around us as we walked, providing a cool breeze in contrast to the blazing heat of the early summer season. “What do you’ll think you’ll get?” I smiled.

“Truly? I would like to get immortality, or telepathy, or maybe even Inter-dimensional Communication… Well, we already dabble in that together, really. Speaking of, have you heard from Sauveuse lately? I lit her candle this morning and she never said anything. Kind of worrying, don’t you think?” At my distress, Serene chuckled.

“You love knowing what Sauveuse is doing at all times, don’t you? I’m sure she’s just relaxing today. She does have to choose who goes over tomorrow.” I nodded, Serene was most likely right. She always is.

As we neared the academy building- a huge stone structure that was relatively plain, save for the few trees and bushes around the front area- Serene sighed, closing her eyes. She was never usually nervous, and if she was, she’d never tell.

“Hey…” I took her hand in mine, holding it reassuringly. “You’ll be OK. Whatever happens, we’ll go through it together.”

“What if… you know what happened with Berry. What if you go to the West side and… I stay here? What happens then? Are you gonna leave me like Berry left you’re mom?” At the mention of my older brother, I froze. Serene knew I didn’t like talking about him. He left 2 years ago, he made his choice… that didn’t mean mine had to be the same.

“‘What if’ questions never get answered.” I curtly replied, giving her hand a squeeze and letting go. “Besides, if anyone is going to go to the West side, it’d be you, not me. We both know your family line is much more extraordinary than mine.” I meant it as a joke, as the hint of sarcasm in my voice implied. We laughed together, both of us nervous wrecks.

The headmaster met us outside, waving us into the Ability Hall. Inside were a number of portraits of different unique ability holders, including my brother, and in the middle of them all, a life-size statue of Sauveuse holding a book filled with all the different abilities discovered. Walking past that, the Hall was packed.

Thousands of students my age were sitting together, some standing around the corners of the hall, but all of them squished together. There was barely room to breathe, let alone walk around once you took your seat. Serene had a vice grip on my arm as I led her around, being sure to get us a seat close to the front.

People were talking, and it was so loud. Ever since Berry left, I never liked loud noises. They scared me more than anything, reminded me of the days before Sauveuse saved my family and took my dad away. I never knew where he went, I was just happy that the Spirit kept her promise and took him away before he hurt my mom anymore. Sometimes dad would use his ability to bend things in favor of hurting mom, like throwing vases at her or smashing beer bottles on her feet or-

“Welcome, young scholars, to the Ability Hall.” While I was drowning in my thoughts, the headmaster had gotten up to the podium, the book that was previously in the hands of Sauveuse’s statue now in her own. “Here, today, you will find out what ability you have, which will affect every aspect of your life, from which side of the wall you are sent to live in, to if you will be allowed to have a pet or not. To begin, we will state the most common abilities along with the people who have received them. Best of luck to you all.”

I gulped, holding Serene’s hand tightly. This really was all or nothing.