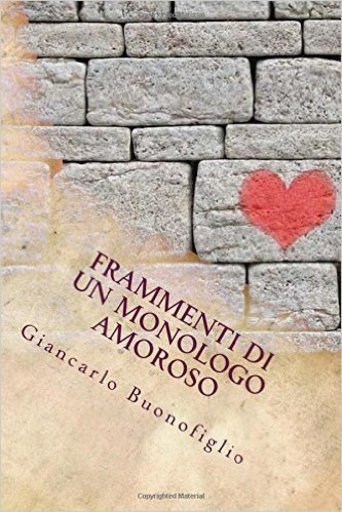 fragments of a monologue of love (in Italian: frammenti di un monologo amoroso)

I begin today to publish the fragments of a monologue of love. I do not feel like Roland Barthes, but as far as the report is structured as a speech, the path of the word remains tautological. A monologue in which the other is an image of the Other small big, present as deprivation or lack. Falling in love comes from the presence of this absence; It is a vacuum in the application.

81 Reads
0 Favorites
Get the App

Lovers say they have a "history". Becoming part of a story means confining the desire within a code; love becomes a story and the story of the staging of a speech. Put a person in love with a "love affair" (a fable) means reconcile with society (Barthes), order it, put it into a frame (in a novel, in a narrative). The structure tames love because desire is anarchy, it is not the rules of society. Do flow into the story leads to sostantivarlo, tie it to the body as a drive missing object, subject to continue it in a stream of words flowing with the use of language and custom. It means to subtract the anarchy of the signifier and put it into a system of relations between the word and the thing. And so the question concentrated at the other sets in motion the instance of the symbolic Law. Saussure distinguished between "language" and "word." The first is the social event of the language and is made up of the code of rules that a person absorbs from the community, without being able to invent or modify. The word is instead the time and creative individual, the way the person speaks "using the language code in to express his own personal thought." He explained that the linguistic sign unites not a "thing" to a "name", but a concept that passes the word desiring a "picture language" (Prince). Then he distinguished between "meaning" and "significant"; the meaning is what the sign expresses, the signifier is the means to express the meaning. Signifier and signified, while being inseparable, for Saussure are linked by an arbitrary relationship, cultural. The operation to place the symbolic imagery (as understood Lacan) has exactly the connotation of giving a body, a name, an identity. To bring in the presence and absence of the presence in a cultic context, historicizing precisely the question of love. Prince (or Princess) before from the beloved feels dominated, imprisoned, kidnapped from this narrative order that exercises a function tyrannical, absorbs the desire, harnesses the language (and in fact the prince almost never speaks in fairy tales), cuts the relationship of context and inserts it in the syntax of the newspaper. The fictional story moved to create an ideological theater of love, and this prevents the circulation of nurture rather than desire. I do not think it had ever read of sexual relations in fairy tales. Barthes has clarified the issue by telling a friend who married instead to call themselves married off and placed it said. It is precisely the desire to settle in a structure (house-fairytale-castle), to order it, to marry him. The greek has a word of consideration "marry", "spèndein", which means promise, swear, make a drink offering. In turn, the verb means libare toast and toast is no movement, exchange of fluids, the pleasure that goes from a glass to another (it is with / paid in the words). The fable consecrates the relationship pouring this into a story that until then had left chaste one of the terms, not marked or meaning. So that it becomes the object only requires that this more real as an object of love is depersonalized, stripped of sense, imprisoned in an imaginary (the prince) that face of otherness and identity of the signifier of the desire for meaning just a story of love. When Cinderella realizes that the man is of noble birth, but only on paper, it is now late. He finds himself still to clean the floors, although a castle.
(From Snow White to me she gives it to him the Seven Dwarfs)