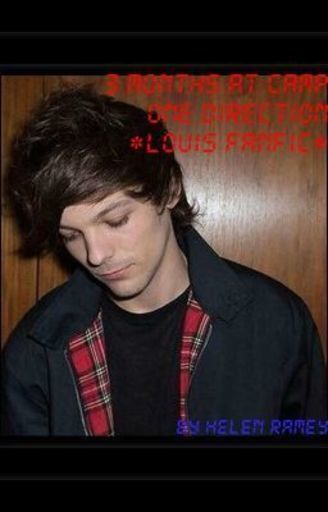 16 year old Amanda Peterson is just now learning how to drive until she gets a text on her phone saying that she gets to go to camp over the summer... when she finishes her driving test, she tells the driving instructor if she could get her driver's license now before she goes to the campgrounds. She leaves driving school, and hurries to pack and head to camp. When she gets to the camp, she goes to her assigned cabin, and starts unpacking. She comes out of the cabin and sees a boy with a British accent standing in front of her with hands clasps in front of him who turns out that he's from a boy band called ONE DIRECTION!!! Will he ask...

When Amanda gets to driving school in the morning, she first goes to check herself in and then follows the instructor out to her car so she can start her pre-test. "First, let me see your driver's license and registration!" Miles tells her as she tries to find her license. "No, I'm sixteen years old... so I need my first license." Amanda reminds him as he checks his clipboard. "Okay, I got you on here for driver's license and registration." Miles replies as he guides Amanda through the pre-test. "Let me see how your blinkers work, first do the left one Amanda." Miles tells her as she turns on the left turn signal. "How about the right turn signal?" Miles continues as she turns on the right signal. "And lastly, let me check the back headlights." Miles says as he steps in the back of Amanda's car. When he's done, they finally start the real testing which the first one is Parallel Parking. "Okay, you see those cones right there?" Miles asks as they drive toward the cones. "Yeah!" Amanda replied. "Okay, what I want you to do is park bumper to bumper with the ones in front of these ones and then turn your wheel to the right and then to the left, and lastly turn it so the car is equal to the cones." Miles reminds her as she goes into the spot. "Good job Amanda!" Miles says as he writes her score on his clipboard. "Okay, now we're gonna go inside those cones down there and try not to run over the eggs sitting on them." Miles reminds her as she drives to the cones with the eggs. When she enters, she hears a buzz on her cell phone. "Miles, I gotta take this real quick... okay?" Amanda says as she checks her text message. "You done yet, Amanda? 'Cause you'll fail if you take too long." Miles asks her as she puts her phone in her pocket and continues driving through the cones. When she gets to the end, she finds that she didn't run over any eggs after all. "You know Amanda?" Miles asks with a smile. "What Miles? Did I pass the tests?" Amanda replies trying not to blush. "You have passed these tests!" Miles reminds her as Amanda screams in shock. "Omg, I can't believe it! I actually have my own license!" Amanda says in shock and tears as the instructor gives her a driver's license. "Good luck with your driving, Amanda!" Miles reminds her as she takes off with her bags to go to camp. "Hey, I heard you screaming over here. You okay?" A girl says leaning on the passenger door. "Yeah, just can't believe I got my first driver's license!" Amanda replies in shock. "What's your name?" She asks. "Amanda... Amanda Peterson!" Amanda greets herself. "I'm Gina!" Gina replies as they both shake hands. "Listen Gina, I'm kinda off to go to camp right now... maybe you would love to come with me!" Amanda reminds her smiling. "Sure, if Family Force 5 is there!" Gina replies as she gets in Amanda's passenger seat where the instructor was seating. "I'm pretty sure they'll be there, you can probably introduce me to them since I have no idea who they are!" Amanda reminds her as they pull out of the driving school parking lot.

When Gina and Amanda get to the campgrounds, Amanda takes out her luggage and heads to the cabin assigned to her and unpacks her posters, pillow, sleeping bag, and sheets.  When she turns to the door, she finds that Gina has wandered off into the camp.  She steps outside the cabin, and starts yelling her name to see if she can hear her, but then she starts running to find her and bring her back to her cabin.  When she finally finds her, she knows someone's behind her in a bush.  "Psss... Psss!" A British voice whispered as Gina talks to 5 guys standing in front of her.  "Shut up Gina!" Amanda whispers as the 5 guys spot her.  "Okay!" Gina whispers back as one of the British boys jump up behind Amanda and scare her to death.  When she turns around, she finally finds herself face to face with LOUIS TOMLINSON.  "I'm gonna die right here! I can't believe I'm in front of Louis Tomlinson! Louis, will you go out with me?" Amanda says in tears and shock as Gina just smiles at Louis.  "Of course I will, Amanda!" Louis replies as they both kiss.  "Come on Louis, lets go play some ping pong!" Amanda reminds him as they go inside the lobby where the snacks and games are.  "You guys wanna join us?" Amanda asks.  "Sure! I'm on his team!" Gina replies pointing to a guy right next to her.  "Oh god dangit!" Amanda cries as she serves the ball.  "Hey Amanda, who's this girl?" The camp manager asks with confusion.  "That's my friend, Gina! She's new!" Amanda reminds the manager smiling.  "Awesome, but we can't have new people join us at the last minute, I'm sorry Amanda." The manager reminds Amanda as Gina runs out the door with the 5 other people.  "See ya later Gina!" Amanda yells as she goes into her cabin with Louis.  "Hey Amanda, I would love to ask ya somethin' in private." Louis says as he kneels in front of Amanda.  "Yeah what Louis?" Amanda asks.  "Amanda Peterson, will you marry me?" Louis proposes as he holds a wedding band in front of her face.  "Omg yes Louis! I will marry me you, love you so much!" Amanda replies in shock as he slides the ring on her finger.  When they finally kiss, Gina is standing by the door with all her stuff watching them.  "Mmm!!!" Amanda yells as they stop kissing and stare at Gina in confusion.  "What ya'll doing'?" Gina asks as she puts her luggage on the top bunk over Amanda's bunk.  "Nothing', we're just talking' Gina." Amanda reminds her as she walks over to her bed and sits.  "What's with the ring?" Gina asks again.  "Um... Louis asked me to marry him! Isn't that great!" Amanda reminded her trying not to blush.  "Oh awesome! When's the wedding?" She asks smiling.  "Don't know yet! Louis, when's our wedding?" Amanda says looking at Louis.  "How about we should have it on July 15?" Louis suggests looking at Amanda.  "Sure, that'd be great!" Amanda replies as she hugs him tightly and he hugs her.  "So Gina, did you invite your favorite band?" Amanda asks.  "Yeah, but they're in a different cabin." Gina replies unpacking her sleeping bag and pillow.  When she's done, they finally go in the lobby and play games like ping pong and basketball.  "You guys wanna play ping pong with us?" Gina asks holding two ping pong paddles.  "No thanks, we'll just watch you guys play." Louis reminds her as Gina serves the ball.  When they start they're game, Louis and Amanda run over to the couch and start having sex and talking about who to invite to their wedding.  "I'm thinking we should invite Gina who's standing over there by the ping pong table, what do you think Louis?" Amanda suggests.  "I think we should invite just fans of One Direction and the rest of the boys." Louis also suggests with a smile as he kisses Amanda.  When they're done talking about they're wedding and when Gina's ping pong game is over, its finally time to have dinner in the dining room.  They all head to the dinner hall and pick up a plate and then dish up some food for themselves.  "Louis, can you dish up mine for me?" Amanda asks acting sexy with a smile as she hands Louis her plate.  When Louis' done dishing up her food, they all head to a table where they could have some privacy and talk about random stuff.  When they're done eating, everybody goes back to their cabins to brush their teeth and go to bed.  "Goodnight Louis! See ya in the morning!" Amanda says as she and Gina goes in their cabin and heads to sleep.
@glowinthedark5er

no mschocoholic , that user dk how 2 even write a damn story :O x 2 many long paragraphs :O x

is there any more parts to this story?