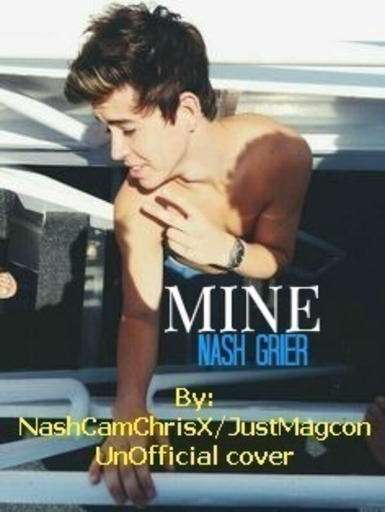 Nash and Lucy have been dating for quite a while. He ends up having a competition with Cameron Dallas Lucy's best friend that moved into town.

Nash is scared that he might lose Lucy, he really loves her, and Cameron has feelings for Lucy, they've been friends since they were in grade 5!

Out of the ordinary Cameron tell a lie about Nash to Lucy, and Lucy leaves Nash.

What's Nash going to do to keep his relationship with Lucy?

Read this book on Wattpad!

Hey, Its NashCamChris but you can call me JustMagcon! The book 'Mine' chapter 1 is published on WATTPAD! Just type down this link [http://www.wattpad.com/user/NashCamChrisX] and you'll get to my profile. Just scroll down and you'll see all my published books!

NO i will not be writing it on here, MAYBE i will if you ask (:

Oh and by the way, i have this quote i use EVERYTIME i leave, so this is it

Let me just introduce myself!

My Name is NashCamChrisX but on Tablo my name is JustMagcon, im a huge writer on Wattpad. I LOVE to write and read Fanfiction! Im a great writer, in my perspective haha, but from my comment on my books i am a great writer! Haha. I love the MagconBoys and im a huge Belieber, i know! Your probably like 'Get Out! Me too' haha, im also a Directioner, Lovatic, Swiftie, 5SOSFan as you can see my profile is 5SOS, Lol.

I currently made this account, and i have to say, i thought that this website would be dumb, BUT now that i have it, lets just say, people change their minds.

I am scared of elevators, haha, i know im Crazy! Ill tell you the top 5 reasons why...

1. I almost DIED! I was trying to hold it open, but it was squeezing me, and my friend pushed me in, seeing that i was being squished to death, and lets just say, shes my HERO!

3. I saw that an elevator was on my floor and before i went in the lights when out, while i was in, and it was still going down..

4. I get terrified that a saw would slice me on my way out, so if we were in an elevator together, you would see my looking up at the elevator door to see if a saw would come down, and i would jump out REALLY fast, haha, dont judge

5. And Lastly, their was a light out, one time. I just got back from work and i went into the elevator while their was a huge storm out, i didnt think it was that big of a problem, so i went in and on my way up, the elevator stops and the lights go out, and i was actually on my own, and i was pressing the alarm and i hear a voice, literally i was like Is that God! Am i DEAD! but it was a system for a firefighter to communicate with me and calm me down, but i wasnt, lets just say that i was freaking out, i was cussing at him like "Get me the f*ck out of here' and i wasnt very nice! Haha

Back to introducing myself.

I LOVE dogs and cats and birds and bunnies and squirrels, im a HUGE animal person, if they scratched my i would think its adorable i'd be like 'aww, do it again!' but it would hurt like a motherf*cker!

Uhm, I love music, i listen to it ERRDAY! Like Maps by maroon5 OMG! And Shawn Mendes Holyyy, i cant. I listen to Taylor Swifts NEW SONG 'Shake it off' OBSESSED! I just love ALL kinds of music!

Anyways, i have this thing for losing/breaking phones, i have had about 10 phones and either they broke, i lost them or someone stole! Yep, phones just run away. I currently lost my NEW phone, IN MY HOME! And i dont know where it could be, its gone...forever! Its been lost for about a month and a half, i would say.. *sigh*

Well, is that enough info for today? Yea? OK!

I hope you guys had a laugh, i dont really know how to make people smile or laugh, im a pain. I basically laugh at my own jokes...Im awkward.

Well, bye! For now! cant wait to communicate with you guys more! (: