Rape in the WorkforceKatherine Crandall

Rape in the Workforce

A highly triggering, politically charged story of a woman who uses her rape at work to make change in the workforce.

I used to think that it was suspicious when a girl would claim to be raped, then have holes in her story, or say things out of order. It was horrible how the defendant’s lawyer would tear those holes apart and call her a liar, but at the same time we would watch the case on television and wonder the same things. How did she forget? How did she remember he was wearing a class ring on his right hand, but got his hair color wrong? If she wasn’t drinking, how come her story is different from other people at the party or doesn’t remember what happened before or after? I found it too easy to side with the defendant. Maybe she was having second guesses, or buyer’s regret. No, she didn’t ask to be raped or abused or taken advantage of. Maybe she had said no to the first advances, but as time went on she agreed, and now wishes she hasn’t. She may not have an ulterior motive, but she may not be as squeaky clean as her lawyer is claiming either.

Now, with the eyes of everyone in the courtroom, this victim is facing a second round of victimization. She was abused, manipulated, and taken advantage of. Society put an unrealistic expectation of purity and moral standard. She is ashamed. She doubts herself, her character, and her worth. She questions if she had asked for it, if she deserved it after all. But using her inner strength, she asks for help. She comes forward as a victim of sexual assault. She discloses a period of her life that she did not want to live the first time, let alone repeat again and again to be scrutinized by societal judges. Suddenly, she is a victim once again, from the whispers and silence judgment passed by her words and actions.

Thirty years ago, rape didn’t happen. Assault didn’t happen. If a female got herself into a bad situation she would pray for the next month and hope she got her period. If it did she passed it as a “bad month”, and if she didn’t, well, there goes your life. You dug your grave, now lay in it.

“Do you need anything?”

Alexys had stayed later than normal to finish a promotional write-up she had been working on for an upcoming Republican Committee event she was suddenly spearheading. The marketing manager was focusing on other projects, and after Jeremy showed potential just a few weeks after hiring, she passed the torch and Alexys knew that it wasn’t an opportunity to let slide by. She knew that if you wanted to get far in life you had to work for it, and she intended to work for everything she ever received. But that didn’t mean she couldn’t help others along the way.

Timothy Blackstock was currently serving as district 22’s state assembly representative, and in addition to his cookie cutter cubicle at the capitol building he had a lavish office at his home base. Here, his team and other local politicians, worked together to build the community at ground level. True, most of his days were spent in courtrooms, reading new bills, and discussing new policies, but the rest of his days were on the pavement. It wasn’t unlikely to see Timothy Blackstock at a ribbon cutting event, shaking hands and serving beer at the VFW, or at his childrens’ school supporting them and their peers at their band or chorus concerts.

She knocked on his door out of common courtesy before she left, to see if there was anything he needed her to do before she left. Even though he wasn’t technically

Alexys wasn’t looking for a new job. She had been at the same management company for over a year when she wound up on a career building website and absentmindedly typed “program director” in the search engine. She wasn’t expecting anything to spark her interest, and she certainly didn’t plan on applying for a job while sitting at the desk her company had so graciously provided.

She met Jeremy while he was still pursuing his degree, and even though he was trying to focus on graduating and making the transition to grad school, they still found themselves caught up in a relationship. She was there when he was unexpectedly rejected from attending the same college to receive his master’s degree, and there with him when he walked across the stage to receive his bachelors. She had little interest in attending college herself, but knew it was important for him to finish strong. She supported him during his late night study sessions, reviewed his papers for grammatical problems and brought him coffee in the morning. It was hardly a surprise to friends when he pulled out a ring at dinner following commencement. His family wasn’t too impressed. They had not met her before, and knew nothing of her lifestyle or history. All they saw was a new face coming out of the woods 6 months before Jeremy received an advanced computer science degree with a focus on programming and app development from one of the most competitive schools in the country. They had expected him to take a job with Google or Microsoft, meet a nice, smart girl, and settle down in the quick pace city life. That’s what he had grown up with, and that’s what they thought he would return to. But after he met Alexys, his mind changed. Suddenly, he wanted a simple life. He no longer wanted a Starbucks on every corner, public transportation blocking the road. He wanted a picket white fence with a dog on the porch, a swing hanging from the tree and a hybrid car in the driveway. Although he had landed a decent job right after graduation, his family constantly checked up on him and asked when he would be coming home. He defended his choice time and time again, but they didn't understand.

The couple had been together over a year when Jeremy decided he wanted to bring Alexys into his life forever. Their hometown was holding a historic holiday stroll, complete with costumes, music, and carriage rides. Jeremy had be sick with the flu the year before, and Alexys came home ranting and raving about the Newfoundland dogs pulling toddlers in little carts, and street performers on stilts with top hats and monocles. This year, Jeremy planned ahead. He had contacted the planning committee, received the stilt performers' contact information. He reached out to them in advance, and with a little monetary incentive the gang agreed to incorporate Alexys into a performance. He booked lunch reservations on the river balcony, and dinner reservations at the favorite Japanese Steakhouse just outside of town.  He planned every detail, with a handful of hints and opportunities. He wanted her to think it was coming, then have the moment slip by, and finally when she wasn't anticipating it- he'd give her the ring.

The couple held hands as they walked from their quiet apartment to the center of town. He bought her gourmet flavored popcorn from the cart on the sidewalk, and he resisted the urge to by an unidentified "meat on a stick" from the adjacent cart- no matter how delicious the aroma smelled in his nostril.  She laughed with the children as they jumped in the residual puddle left behind from last nights storm, and played with rustic old-school colonial games. 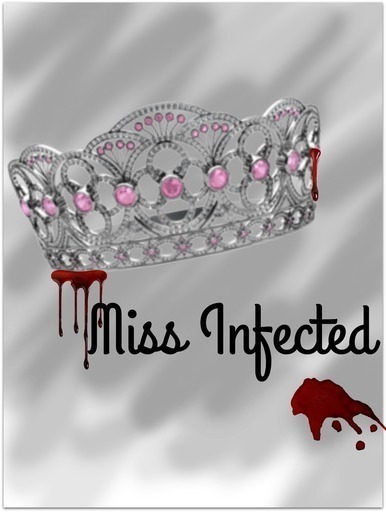 When popularity has the power to kill, red lipstick and a set of pearls completes any outfit. For Logan Grey, this statement holds more meaning as she learns about a virus secretly taking over the city. After leaving work late one night she escapes what would be a violent attack, and after returning safely to her loft apartment her mind lingers on the few words her attacker shouts before she escaped- "She's already killed you, your fate will be sealed before you infect others." Before she knows it she comes in contact with the attacker again, but this time she isn't so lucky to get away. But as the mystery woman in red raises the knife...

Miss America is an icon. She's not a wall flower with a physical disability and a speech impediment. I signed up for a local pageant out of spite, but developed a passion for pageantry that would change my outlook on life and light the path to my future. You can't choose your genetics, but you can choose your attitude.

A summer romance with a timeline.