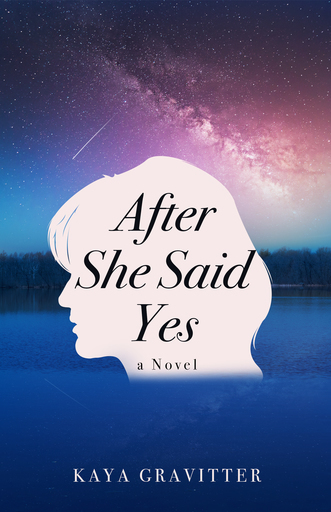 After She Said Yes (Chapter 1 preview)

After She Said Yes is a Women's Fiction Novel about Aurora, a magazine editor in Madison, Wisconsin. She finds her way out of an abusive marriage after catching her husband, Gannon, doing something she could never forgive him for. Battling the wounds inflicted throughout her abusive marriage, she strives to find the strength to be an independent woman again. Aurora is confronted with a rekindled flirtation with her soon-to-be ex-husband’s friend, Melih, a Turkish Muslim man. But will Aurora's previous marriage stand in the way? Finding surprising success after an article of hers goes viral, Aurora must make a choice. She tells herself to...

5 Reads
3 Favorites
Get the App

I dedicate this book to all women. May you always have the strength to stand up to any man who tries to silence you.

Hurry up, Aurora. You gotta leave before he sees you.

Aurora was about to leave for work. She looked into the mirror that was hanging on her cream-colored walls in the doorway entrance of her apartment. She put her dark wavy hair into a ponytail, and then fluffed her fringe bangs. She touched the bags under her blue eyes, hoping the dark circles would go away. She picked up her big black-rimmed glasses that were sitting on the entryway table. She put the glasses on, and they fit snugly on the small curve of her flat nose that she had inherited from her grandfather. After she un-tucked her white long-sleeved blouse to hide the small of her curves on her slender body, she pulled down the blouse as much as she could to cover her hips.

“Where are ya goin’ dressed like that?” Gannon, her husband, said in his sly southern drawl. Gannon’s red hair was a mess. He was still in his pajamas.

I used to love seeing him next to me in the morning when I first woke up. She looked down at her outfit. But now… Along with the blouse, she was wearing black pants and black Chanel flats with small white ribbon bows on the front of them.

Why do I put up with this?

Gannon’s cheeks became red and flushed. “Not dressed like that you ain’t. Why'd you have makeup on?” He raised his red eyebrows and opened his brown eyes wide. “Who are you gettin’ dressed up for?” He laughed, but Aurora knew that he wasn’t joking.

I only have a little mascara on my eyelashes. She pushed her index finger against the bridge of her glasses.

“No, of course not,” Aurora said, shocked. “I dress like this all of the time, Gan. I wear makeup for myself. I don’t know why you care so much.” How can he see this small amount of makeup, anyway?

“Can’t you just do as I say?” Gannon said. “It would make me feel better for you to stop showing off your body.”

“But I’m...” Aurora looked down at her outfit again but couldn’t see her curves under her loose clothing.

“Put on a different shirt or at least a jacket. You know it’s cold in Madison.”

Aurora looked out the small window next to the door and heard a gust of wind. She shrugged her shoulders in agreement with Gannon’s comment.

“I grew up in cold weather, not in Alabama like you, Gannon.” Aurora had grown up on a small crop farm in northern Wisconsin. Her grandparents bought the land when they moved to the United States from Germany.

“Well,” she sighed, “if it would make you feel better.”

Gannon opened up his arms and pulled Aurora into him, his arms muscular and cold. She stood there, stiff and enveloped in Gannon’s chest. A tear ran down her blushing face.

“You are too pretty to cry.” Gannon dried the tear and pushed her bangs behind her right ear. Aurora froze.

“Don’t leave home again without asking me what to wear. You know better. Besides, your body is too sexy for anyone to see it.” How is this sexy?

“Okay,” she stuttered, “I won’t.” Gannon gave her a black suit jacket to put on and she flashed him a fake smile. She grabbed her purse, keys, and coffee mug.

As Aurora stepped out of her house to lock the front door, she took a deep breath and inhaled the crisp air. As she exhaled, she tried to release the tension that had been building in her chest. She grabbed her phone from her purse, put her headphones in, and listened to Enya to relax her nerves. Her polished thumb, a glossy red, swiped the volume up across the screen. She walked up State Street in downtown Madison, Wisconsin, starting from the college to the state capitol building. This part of town was filled with restaurants, bars, and vintage clothing stores.

While she was a block past her house, she stopped and set her coffee mug on a park bench. She rolled her eyes as she took off the black suit jacket Gannon had urged her to wear. She draped the jacket over her arm, trying to dismiss the thought of Gannon from her mind. As Aurora continued to walk, she stared at the trees bursting with color. The colors reminded Aurora of the cold autumns in her hometown. In the summers, the fields were covered with crops of some sort, usually corn or hay rustling in the wind.

Aurora took out her headphones as she walked into her work building. The glass-fronted building was sandwiched between an art museum and an old Italian restaurant called Amore.

“Good morning, Mrs. Tousey,” Tiffany, Aurora's assistant, greeted her. She was a short brunette with curly hair wrapped in a bun.

“Morning,” Aurora replied as she opened her office door.

Aurora’s office had white walls with one painting made of colored squares of black, pink, and yellow. Her desk, where she spent many late nights editing, was pushed to a corner of the room. On the left of her desk was a full glass window overlooking the marbled Wisconsin state capitol building. She loved the way natural light was brought into the room. She also loved to watch people walk by and imagine their life stories. The window by her office door overlooked her assistant’s desk, but she usually kept the shades on that window closed. She liked her privacy.

On the wall behind Aurora’s desk hung her diploma in a dark brown wooden frame. In another frame was her first article published in The New York Times.

Aurora’s phone rang. She pulled it from her purse. Shahrazad popped up. What could she want? Aurora picked up.

“Hey, Rora,” her friend said while sighing. Aurora and Shazzy met through mutual friends a few years before at a party of one of Aurora’s college friends.  Shazzy was shorter than Aurora. Aurora thought she was curvy and beautiful. Shazzy had black shoulder-length bouncy curls. Some would call her chubby, but she owned her body shape. Aurora wished she could love her body as Shazzy did. Aurora loved that Shazzy was so smart, but also loved to live life on the edge. She wanted a spontaneous spark in her own life. Shazzy brought that, but sometimes Shazzy brought too much spontaneity.

“Hey, what’s up?” Aurora leaned back in her chair, cradling the phone against her cheek. “You okay, Shazzy? Don’t you have patients today?”

“I have a break now. I was wondering if I could stay the night at your place tonight.” Though Shazzy was a doctor, she was from a conservative Iranian family. Since she was unmarried, she still lived with her family, since that was her “family’s” values.

“I mean, sure. I just need to ask Gannon first,” Aurora said. “But why do you need to stay over? Is everything okay?”

“I got into a fight with my parents….”

“What happened this time?”

“One of my parents’ friends saw me on a date with a boy.”

Aurora exhaled through her teeth. “Shazzy.”

“Well, we were kissing.”

Aurora rolled her eyes. I think she usually does more than kissing.

“I was raised Muslim,” Shazzy said. “You know my parents are strict, but I hate being told what to do. I’m thirty years old!” Shazzy tried to be promiscuous because her Iranian parents were old-fashioned, so she always lashed out in her personal life any way that she could.

“I don’t know how you manage to sneak out. I mean, I can’t--” Aurora cut herself off. “Uhh, well anyway, what if Gannon says no?”

Shazzy appears to be so tough on the outside, so why does she want to stay at my place?

“Come on, Aurora. I am not asking you to go out and party. I am just asking to stay over.” Aurora could hear the shakiness in Shazzy’s voice. “Besides, I will be in good company and will bring wine.”

Nights when Gannon would go out of town for work, Shazzy would call Aurora. Some nights Aurora wanted to spite Gannon, so she would let Shazzy drag her out to a dive bar called The Outfit. The faux leather seats were torn, and the neon sign only displayed the letters, “The OU-F--.” After a night of dancing and drinking, the hangovers would make Aurora feel nauseated and irritable.

“No, I don’t really want to drink tonight,” Aurora said. “I just got this book from the library.”

“Don’t be so boring!” Shazzy said. “You are a career woman; you need to enjoy yourself. Come on! It will be fun.”

“Reading a book and drinking a cup of hot chocolate is reward enough.”

“Fine. I will call Gannon,” Aurora said. “You have patients to get back to and I need to get back to work. Also, don’t bring the wine unless you plan to drink it while Gannon is asleep.”

Aurora called Gannon after she hung up with Shazzy.

“Hey… I am a bit busy with this designing thing for work. Can I call you back later?”

“Can Shazzy stay over tonight?”

“Why? Doesn’t she live with her parents?” Gannon said.

“Yes, but it is kind of complicated,” Aurora said. “She got in a fight.”

“I know, but she really has nowhere else to go.”

“Fine,” Gannon said. “I have a deadline tonight. I just don’t want any noise.”

“It's good you asked me. You know I don’t want you to hang out with anyone I don’t approve of.”

“Exactly like that! It is for your own good. You will thank me someday.”

“Well, see you later,” Aurora said as she hung up.

This is really well written. I like your work.