Jon has never had real friends and has battled ADD and OCD his whole life. Now, at age 20, he's coming to terms with being gay, but his new friend Mike is pushing him to come out before he's ready.

Jon lived in Levittown, New York, with his dad and stepmom.

Most of the cozy, one-story houses were being expanded into mini-mansions. Older residents complained that the flavor of classic suburban America was being lost.

“Don’t you want a yard for your children to play in? And who really needs a big empty house, anyway?”

Almost everyone, even the older residents, had an addition to their house, but they did not file for these additions since they didn’t want to pay taxes on the extra square footage. They all had the same siding, the same furniture. They all went to Kohl’s with their weekly coupons, to Friday’s or Friendly’s on the weekends, and to Roosevelt Field Mall because it had the “better” Macy’s (better than Broadway Mall, which was considered “too ghetto”). They pretended to get their jewelry from Zales, but more than likely they’d stopped into the Tri-County Flea Market and ate a Dill pickle while they picked out their niece’s graduation present or their wedding tiara.

Everyone’s diet consisted of deli meats, bagels, frozen yogurt with all the add-ons, and take-out Italian food. If they were feeling exotic, they would go to Hicksville for some Tex-Mex or a mango lassi. Sometimes, teenagers or college students would go into the city for a Rangers game or a friend’s twenty-first birthday. They waited on the Long Island Rail and giggled about heading into New York, and got nervous about the prospect of transferring in Jamaica (even though they never, ever needed to). They only went to clubs that were in walking distance from Penn Station, but they still took a cab.

This is where Jon lived, and Jon was gay.

Jon wasn’t just gay—Jon was plagued with OCD and ADD, with depression and paranoia. Jon’s father was a master of denial, and had been for Jon’s entire life:

“When Jon is in kindergarten, he’ll realize boys don’t play with nail polish. The other kids will toughen him up. It’s because he’s an only child, and he’s around his mother too much.”

“When Jon is in second grade, that’s a really big shift. And now that his mother is out of the picture, and she’s not around to put him down, maybe now he will focus.”

“Jon doesn’t need those pills. The teachers just need to be patient with him. Fourth grade, that will be the year.”

“Middle school is when puberty hits. You’ll see—Everything will change. He will have to be a man now. He’ll see his first pair of breasts and that’s it.”

“High school. He has to change now. Maybe he’ll join a sport.”

Jon’s biological mother, a sufferer of Munchausen Syndrome, had constantly told Jon that he had any number of physical ailments—that he was allergic to dairy, to nuts, to eggs, that maybe he had butterfly skin that would tear open and never heal, that maybe his heart would just stop in the night. Jon had a stable suburban home but he never believed in it. He spent his early childhood thinking that the floor underneath him would split open and reveal the fires of hell.

For all of her worrying, Jon’s mother wasn’t patient with the problems her son actually had. Jon didn’t learn his alphabet or his numbers as quickly as the other children did. When he was in first grade, Jon’s mom—frustrated, impatient, and exhausted—drove him out to Flatbush, Brooklyn, and showed him drug addicts living on the street.

“See that? That’s where you belong. That’s what happens when kids don’t learn in school. Get out of the car.” She parked the car, got out, unfastened Jon’s car seat and tugged on his arm.

“I don’t want to,” Jon cried and closed his eyes.

She eventually took him home. Jon told his father what had happened, and that was it for their marriage and Jon’s relationship with his mother as a whole. Jon’s father got full custody of him, and Gabriela, his stepmom, soon entered the picture. She attempted to heal what Jon’s mother had wrecked. She cooked every meal, kept the house spotless, and even typed up Jon’s homework for him. Gabriela was patient, but would still get frustrated at Jon’s inability to focus and his tendency to become obsessed with one thing—a phone, a famous person, a song—beyond what was normal. Jon collected old flip phones because he liked the sound they made when they clicked shut, and he spent a year opening and closing them—at the dinner table, in class, when he sat on the toilet.

Jon hadn’t come out . . . not really, but he was pretty sure Gabriela knew. When he was ten, he went through a phase where he recorded every Nelly Furtado video playing on VH1, and then recreated all the dances. He danced in the living room during the summer between third and fourth grade. Gabriela saw him obsessively trying to flip his hair, put his hand on his hip, and moan with the beat. She didn’t interfere, just kept folding laundry and switching out the seasonal fake fruit on her dining room table.

Now Jon was twenty. He lived with his father and hadn’t gone to college—Jon was pushed through the public school system and was allowed to take extra gym courses instead of health or foreign languages, so even community college posed a challenge for him. He couldn’t do basic math without a calculator, and had never learned how to string a paragraph together. Jon’s OCD made him obsessed with cell phones, traffic cameras, and posing as other people on the Internet, but his ADD made it impossible for him to develop any practical skills. His father still believed something would “snap him” out of it, and his stepmom, Gabriela, didn’t think it was her “place” to interfere. She wanted her own children, and arguing with her husband over his adult son wasn’t going to get her there.

Jon didn’t have the confidence to apply for jobs. School, his mother, and even the endless patience of his stepmother had taught him that he was not good at anything. He helped his dad repair refrigerators and air conditioners all over Long Island. They liked to stick to the North Shore. There were better clients—upscale restaurants and country clubs—up in Old Westbury, Port Washington.

That morning, Jon and his father were going to a country club to service a walk-in box. Gabriela made breakfast—eggs with bacon, bagels covered in both butter and cream cheese. Jon put the eggs and bacon in his bagel, added ketchup, and ate it like a sandwich. Jon’s father watched his son eat with some disgust, made himself a pot of coffee, and didn’t eat a thing. Gabriela ate half of half a bagel, then claimed she was too busy to eat.

“I have to go to the Department of Buildings today,” Gabriela announced. “I’m going to get the fence issue resolved, finally.”

“What fence issue?” Jon spat a bit of bagel and ketchup when he spoke. Gabriela wiped it off her cheek with a long, manicured nail.

“Terrence’s fence might be in the wrong place. Since he’s replacing the fence, this is the best time to see exactly where our property ends. According to our plans, we should have two extra feet.”

“Why can’t they just put the fence where the fence has always been? Does it matter?”

Gabriela stood up to throw away her still-full plate of eggs. Jon took the plate from her and kept eating. He poured more ketchup on both of his plates.

“Why do you always eat like you’re starving? It’s disgusting.” Jon’s father snorted.

“You should care, Jon. This house might be yours someday. Two extra feet makes a big difference when the property is appraised. Besides, why should he get two extra feet if it’s technically ours?” Jon shrugged and put his head down into his food. He could feel his father’s eyes looking at him with disgust. Jon poured more ketchup on his eggs. He didn’t have a flip phone on him; his dad forbade them at the dinner table. He found himself wanting one.

“I also have to go grocery shopping because someone ate all the peanut butter. And the bread.” Gabriela was referring to him. Jon shrugged. To him, it seemed normal that whoever ate the peanut butter would have also eaten the bread. He didn’t understand why she was making it seem like a crime. Wasn’t that what it was for?

They got into the red work van. Tools in the back, ladder on top, Freon tanks secured. There were crumbs on the seats from all the sandwiches eaten on the go, cup rings on the dashboard.

“Dad,” Jon said sporadically. “What would you do if I said I was gay?”

“That would never happen,” his father said without pause. “Because gay people don’t live in my house.”

That was the end of the discussion, and they went to service the walk-in. 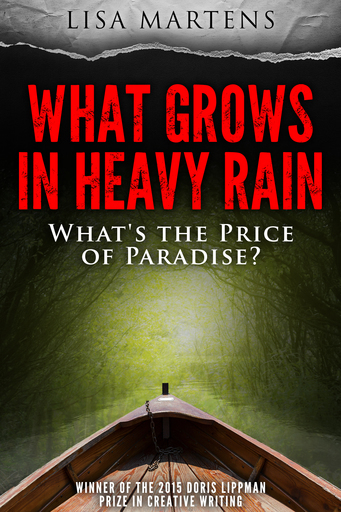 What Grows in Heavy Rain

Two Americans, two Costa Ricans and two Nicaraguans struggle through the rainy season in a small gated community in La Garita, Costa Rica. Through the rain and budding fruit, they battle through terminal illness, poverty, boredom, ex-husbands, theft, and sexual assault. The Costa Rican air has a way of turning even the most logical mind wild with passion.