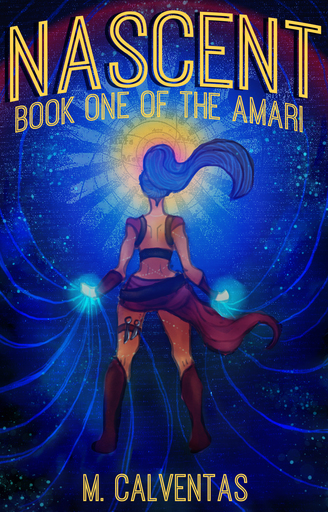 Nascent: Book One of the Amari

A foundling raised in stealth and silence. A prodigal son. An acolyte haunted by a peculiar curse. Tara, Jude and Tempest are Graelings, the put-upon race borne of a union between the fearsome Immortali and lesser mortals, and the only place they can exist openly is Farlan. Yet the city is changing, even as Bloodlines jockey for power and influence, a series of killing threaten to undo the fragile peace of the city. If that weren't enough, the Isaac, the poet-mystic of the Farlan chooses to tell a story long forgotten: "They speak of a woman that tore the world asunder, and we wait for the one that will put it back together...

34 Reads
2 Favorites
Get the App

The only thing she could focus on were her hands; blood-smeared and caked in dirt. Strands of scarlet hair pooled around Cerxes' knees as she took in a shaky breath. Patches of light danced across her vision. She could not raise her head just yet, but she could scent the air.
Here was untouched and unblemished, it smelled of green and salty sea and damp earth.
The bundle strapped to her chest wriggled, and she allowed herself a gasp of relief. She hugged the child close.
"It is done," she whispered. Her whole body ached, for surely, some of the blood that stained her skin was her own.
"Yes," the word hung in the air, pregnant with sorrow and disappointment.
The woman looked up at the unexpected arrival, and flinched. The delirium of exhaustion must be setting in, for the woman before her wavered before her eyes. Coppery hair and blue eyes one moment, shorn platinum locks and a silvery gaze the next. The woman was in turns, ancient, nubile, and maternal, silhouette limned with blazing light.
"Goddess," She bowed her head again, clutching her bundle closer to her. Her baby daughter gave a mewl of protest, but subsided.
"Why?" this time the voice was gentler, younger. She dared not look, though she suspected she would find a girl no older than twelve cycles, the bud of youth on her cheeks and lips, gazing down at her.
"You know why," Cerxes could not help the bitterness that edged her voice.
"All this slaughter and destruction for one soul?" the voice remained the same.  The Goddess had settled on the form of the youth then. "You would use the power I have gifted you for retribution? For vengeance?"
"No, I did this for my child and her children after her. So that they can be free of those that would kill her for simply existing."
"So you bring them to this empty, barren world?"
"So that they may rule! You looked upon me once and deemed me worthy of saving. Can you not do the same for the whole of my kind?" the woman pleaded.
There was a terrible silence, as the weight of the Goddess' regard settled upon her bowed head. Even her infant daughter dared not breach it, though they were both shivering when the Goddess finally answered.
"I will allow it. A city will be built for your daughter to call home, and it will be a sanctuary. No matter where your kind are, they will be called to its gates. It will be a beacon of hope down through the ages."
"Thank you," the woman released the breath she was holding.
"I am not finished." The child's clear voice deepened into something darker. She felt the Goddess' shadow blot out the sun as her form shifted again, "You have wounded the fabric of my creation, Cerxes, daughter of Enarra. The balance must be redressed, and you, punished."
Cerxes' hands were shaking, but she undid the knot on the sling that held her child. She offered the infant up to the Goddess, who had taken up the form of a tall, forbidding ancient, with tangled white hair and sightless eyes.
"I do not fear my death," she answered calmly, "we will be reunited at long last."
The Goddess accepted her infant daughter and stared down at the perfection of miniature features. "Listen close Cerxes, for this is the curse you wrought on your child, and her children after her.  They shall all be orphans in one form or another. They will never truly know what it is to belong. This world you sought to give them will never truly be theirs."
Her temper flared, "Is this the bargain that was struck with the Immortali?"
"They willingly paid their price, as must you. Hand me your blade."
Cerxes proffered her sword up to the Goddess. It had lain ignored by her side splattered with soil and blood like she was. Even so, its blade remained keen.
Thunder rumbled, and the clouds burst with a downpour of rain, washing the last traces of Cerxes' transgression from her body.
"Who will build the city?" she shouted above the din of the storm.
"Those that set us on this path. They have been called," The Goddess cradled her child in one arm and held the sword with the other.
"No." Cerxes surged to her feet, only to be met by the blade of her own sword at her throat, "Not after what they did."
"Yes. This is their price. They will build your city, and care for your daughter."
Already, she could feel the gathering of the Goddess' power, sense the figures moving through the rifts her blade had created. The yet unheard pealing of bells.
Her anger was lackluster, much to her surprise. The exhaustion was seeping through her bones, the very gravity of what she had done.
"It is time," the Goddess' voice was grave, her face so very terrible in its beauty.
Wordlessly, Cerxes dropped to her knees again, brushing her dripping hair forward to expose the back of her neck.
Let it be swift, she silently implored the Goddess, nay her own blade, as she waited for its fall.

I am really interested to see where this goes. You have a powerful writing style. I enjoyed the descriptions and found myself wanting more detail, as the scene is very mysterious. I look forward to reading more!