This is for the Flash Fiction competition, unless the entry's too late. It's about invading the Queen's private space in the most virtually creative and disastrous manner.

61 Reads
0 Favorites
Get the App

'The power's out,' Julian says.

He was saying something important just now. He was trying to tell the world exactly how he felt when he invaded an unmarked virtual body. He'd hacked into it, sans spilling blood for the body was virtual. With enough crypto-currency at his disposal, obtained by solving some of the hardest mathematical, societal, ethical, and organisational problems known to man, Julian had managed to hack into a mysterious body in the virtual world: a body he was trying to identify just now through describing the feel, the touch, and the silhouette to the world.

But now the power's out.

'The lights in the studio are still on,' I say.

'Generator,' Julian explains, shaking his head. 'The live streaming has stopped. Why don't we still use battery-powered laptops? We need them in situations like this. Not Tesla's stupid wireless electricity.'

'Was it something you said?' I say.

'What do you mean?' Julian asks.

'Censorship,' I state. 'You're the first person to hack into this virtual body. You have more crypto-currency than anyone on earth, so you were able to access a part of the virtual world that no average person has ever seen before. Someone doesn't want this virtual person and her location identified.'

'The body was frail,' Julian says. 'Do you know of an important but frail woman in Britain? That's hardly likely these days, given women have been genetically-engineered to be as strong as men. This body felt disgusting. It was like I was having virtual sex with an old lady.'

'You hacked into the fuckin' virtual Queen!' I exclaim. 'Shit! We gotta get out of here. Her men are probably on their way here.'

'Who else would it be? She's so weak nowadays that her body must be controlled digitally. And you found a way into it. You were in the process of telling the world how to inhabit the Queen and enable a socialist - and perhaps geniocratic - uprising.'

'You mean the power could be out for real . . . ours for real?' Julian asks. 'Power could be made public? Finally?'

I see cracks forming. In glass . . . ceilings . . . meaning our destruction is now imminent.

I rush to the nearest window.

'Mushroom,' I say, tears forming in my eyes.

'Oh God!' Julian says. 'Please let this be a nightmare.'

But it's too bright.

We can do nothing but drop.

The power's not out.

One breath would bring me to life but they keep it to themselves, like their sweat I can never smell. Call me a pervert: I can never tell. Silent, still, behind a cage of the materialisation of 'longing for change' I can't escape from or change like it's a light bulb, seeking no personal space for a change, seeking warmth and her smooth arms wrapped around my body as a replacement for sorrow.

I wander around aimlessly, in a store, a salesman forever on sale, never inspected, never sold, never loved, circling books like they're nothing but words of advice I follow but get nowhere, a vulture longing for love, craving attention and affection, caught and cornered (like I'm a commodity one can make a killing from) by depression spread by the indifference of women toward me. 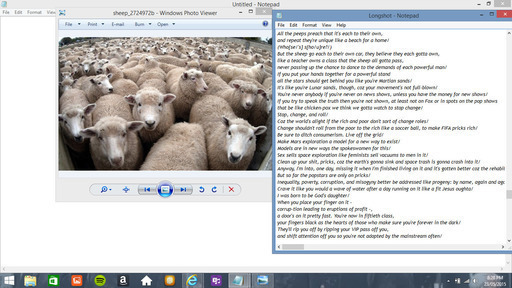 This is the fifth in my South Park-style episodes. This one comically tackles the issue of euthanasia and the death penalty in one crazy fell swoop. Cancer patients want the right to die so they travel from Alaska to Jakarta with heaps of weed. It gets even more bizarre, don't worry. Lots of convoluted rap in this one that'll send you insane.