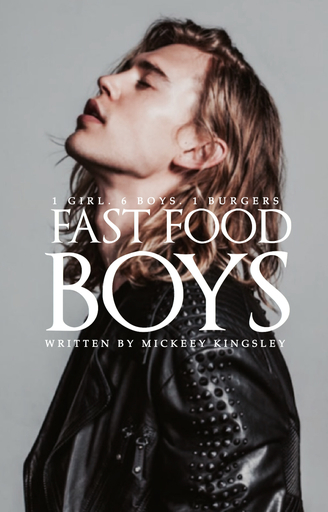 When Diana begins her job at Betty's Diner, she expect nothing more than low tips and rude customers. But when a group of diverse boys are hired as cooks her emotions cloud her judgement. You could say they have a fetish for burgers and fries.... a very greasy fetish.

85 Reads
0 Favorites
Get the App

DIANA KNEW THAT HER TIPS WOULD THIN because of the diner lunch rush. She poured the last of the coffee in the overheated pot and sat in a lonely booth. She looked outside the glass window to see a classic black convertible pull up in the parking lot.

Only thought was that who ever was in the car saw that the diner was closed. Diana took a sip of her sweet as sugar coffee and looked back outside to a man who looked about her age walked opening the door. She lifted herself from the booth as the man looked around at the diner.

"I'm sorry but were closed" Diana said looking at the man's choice of clothing. A button down baby blue shirt to match his eyes and sunglasses up top his brown highlighted hair. Diana could see that he was in a dyer need of food.

"All that I wanted a plate of fries" the guy said as he could the fryer going. "Sorry but we closed at ten and you don't really fit the french fries type of guy" Diana commented as grabbed her coat from the chair. "Oh, just because I look like god slapped with his golden frying pan doesn't mean I can't eat french fries" Diana glanced at him and she knew that he wasn't give up.

"It amazes me how modest sound right now" Diana commented and he laughed a little. "Fine you can have your french fries but you have to cook them yourself" Diana sat her coat down back in her booth and gestured the man toward the kitchen.

"I didn't get your name" Diana commented starting the deep fryer. "Wayne and yours?" the man answered as he moved toward Diana position. "Diana" she answered grabbing the french fries from the cooler. "Well, Miss Diana, I surprised you even let me in here" Wayne said removing his sunglasses from his head.

"And why is that?" Diana questioned. "Because what if I was one of those killer types?" Wayne questioned back waiting for Diana's response. "Because what kind of guy would go through this much trouble just for some fries?" Diana responded as she poured decent amount of french fries into the deep fryer.

"Touché," Wayne commented "but you'd be expecting some overweight guy with a beard and sweat all over his forehead instead of someone like me wouldn't you?" Wayne asked. Diana sighed and finally answered. "I don't judge and we better hurry before the fat man comes" She joked.

Diana tossed Wayne a apron which had been covered in multiple grease stains and he looked pretty reluctant to slip it on. He finally put it on and stepped forward toward the deep fryer with the fries sizzling.

Diana could see that he had been holding back on the handle of the deep fryer and she could predict that he wasn't going to be done anytime soon. She swiftly and quickly grabbed his hands and applied more pressure.

He looked her right in his eyes and Diana didn't mind it. She had a run of bad relationships which she was used too but he seemed different. Even though they had just met a couple of minutes ago.

Right before the french fries could burn she swiftly turned the fryer off and wiped her greasy hands. "You now, if you wanted to hold my hands you could have just asked" Wayne commented as he removed the apron from his body.

"Don't flatter yourself sweetheart, I have a boyfriend" Diana replied as she grabbed a styrofoam box from the front counter.

"You really don't have it lie," Wayne said "I've been rejected before." Wayne knew that Diana had been lying as it was one of his many senses. "And exactly why don't you think I have a boyfriend?" Diana questioned as she placed the crispy golden fries into the box.

"Because you wouldn't held my hands that tight and looked into my eyes like you wanted to lock lips with me" Wayne said a cliche romantic tone.

"I guess your right but you have to go before I miss the subway" Diana said as she had her hands on his back pushing him out of the kitchen.  "But before I go, I might as well give you this" Wayne grabbed a napkin and the pen that sat in Diana's pocket and write down numbers.

"You might want to keep this somewhere safe" Wayne placed the napkin in her palm and exited out of the diner.

"See ya" Wayne said as he waved goodbye with two hands.

"Bye" Diana said as she opened the napkin and scoffed. Her thought when she saw his number was that he was just a hit and run. But as she thought for a second, he seemed way too familiar to be a hit and run.

She stopped from daze and took off her apron and grabbed her jacket by the register. She had to hurry before her regular subway train left and  she had to walk in the middle of night with only her thoughts and Wayne's number.

But for some reason his number kept her safe and that's all that mattered. Even though they had just met, he seemed to kind to not let her walk in cold.

She locked the diners doors and turned to her body to see Wayne leaned up against his cherry red old school convertible car with a smirk on his face.

"Need a lift?" He asked opening the passenger door. "Fine but we're gonna spilt those fries" Diana said as she walked toward the passengers seat and climbed in.

"Okay but I gotta warn you, I've  won every french fries eating contest in Brooklyn and New York" Wayne said as Diana laughed thinking that he was joking.

Wayne opened the box and pulled down the top of the car. Diana was first to grab a fry and Wayne could see that she had her own way of eating them. She broke it in two and put both her mouth.

"Here we go French Fry Queen" Wayne said as she placed his foot on the gas pedal and drove out of the diner parking lot. Diana had never met some let like Wayne before.

A guy like him who more than often eats Fast Food was rare. Very, very, very rare