Glastthen is the next destination the travelers has arrived to. It's a Medieval city, which possessed luxuries, riches, and even people who can use magic. But lately, people have mysteriously disappeared. And the only clue that were left behind before their disappearance was mark burned down into the ground where they were standing. According to the folks of the city, it is the mark of Gorg, the King of the Demons. People were beginning to assume that Gorg will soon rise again and destroy the world. Panic and a number of cultist were rising and causing havoc within the city. Will the travelers be able to find the key and resolve...

Everyone's jaws were dropped after entering the next cargo.  They were expecting a nasty surprise considering everything they've gone through: traveling to different worlds, collecting magical keys, and fighting robots.  Never did they expect something like this in the next cargo.  Then again, back then none of them could ever expect they get dragged into an epic journey which can only exist in movies and books.  Yet, here they are, and it's all the fault of the Alternate.

"No way.  I never thought something like this would happen," said Dirk.

"I know what you mean, man.  I cannot believe what I'm seeing too," said Hideyoshi.

Inside the cargo lies a long table, carrying a row of exquisite food.  At the start, a platter of dozens of steamed lobsters.  Next to it is another platter but filled with a large schnitzel covered by a vast pool of mushrooms and jaeger sauce.  And there were many more which none of them can identify but still find it very tasty.

"Are all boys always so excited to see food?" Emma asked Sarah.

"Pretty much.  They were known to be vicious beast when they get too hungry."

"More vicious than man itself.  They're demons," she said then burst out a laugh.  Emma did the same.

"What the hell are we waiting for?" Dirk exclaimed.  "Lets dine in."

The three young men charges in until, simultaneously, they tripped over.  Sarah had to stop them by conjuring a spear and strike them below their ankles.

"Ow!  What was that for, Sarah?" Gabriel asked.

"I understand you three are hungry, but we don't even know if the Alternate may have done something, like poisoning the food."

Sarah became so furious at Hideyoshi.  But when she notice Emma is taking a bite or two on the biscuit she pick from the table, Sarah's mood has immediately change.  Of course, Hideyoshi would be upset for being the only one she yells at if he weren't so hungry.

Once the food has been declared safe to eat, Dirk and Gabriel intensely dined into the exquisite banquet.  Each of them took a hand full chunk of food and, like Hideyoshi, stuffed the whole thing into their mouths.  Sarah would've lost her appetite by watching them eating like pigs; however, she needs to eat like the rest of them.

Gabriel has just awaken.  At first, he thought everything that happened was nothing but a crazy dream.  To travel from different worlds on a train and fighting enemies with four strangers to get a magical key, anyone would've believe it's a dream.  Until he noticed Dirk sleeping on his shoulder with drool leaking out of his mouth, Gabriel has finally realized something....

This is not a dream!

The entire place was in utter mess.  Food on the table was scattered all over the cargo and even on everybody.  And everybody was sleeping on either the floor or on the walls like a bunch of lazy bums.  It soon led Gabriel to remember what happened.  Basically, everyone was just devouring the food all the to the point when they're stomachs get so full to make them passed out.  At least that's what he remembered.

Hideyoshi was still awake like Gabriel.  He appears to be completely lost in thought while drawing something in the air with his finger.  His mind finally returned when Gabriel called out to him.

"Heh, if a morning actually exist here.  By the way, what were you doing a moment ago?"

"It's just an old habit I've been doing whenever something bright comes into my head."

"'Something bright'?  Are you an artist?"

Gabriel thought he shouldn't press on into his past any further.  Hideyoshi must've gone through the same kind of hardship he had experience before he board this train.

"You want to know don't you?" Hideyoshi asked.

"...About two months ago, before this epic adventure has begun, I had just finished my work.  A master piece that has took me six months  of hard work and research to finished.  But in the end, it didn't go well for me."

"Did those art critics dislike it?"

"No.  Actually, they love it.  The real problem was that someone else..."

Hideyoshi couldn't say it.  It was nothing more than taboo to him for reminding how painful those times were.  Regardless, it didn't take Gabriel too long to figure it out.

"Someone plagiarized your work?"  Gabriel gasped.

He didn't answer, but his silence confirms it.  To have his work stolen and declared under the thief's name would definitely put him in an appalled situation.  Enough to make him quit his artist dreams.

"I'm sorry that happened to you."

"Well that was only half of the misery I've been through."

"What's worst than having the art you've been working so hard on stolen from you so easily?"

"Thanks for putting it so harshly," Hideyoshi whispered to himself.  "First you tell me about you're backstory."

"Dude, it's only fair that if a buddy told someone his backstory then that someone should tell theirs."

"But you didn't finished."

"I've finished part one of my life's story.  I will tell you the last part if you tell me your backstory first."

Gabriel became silent.  Hideyoshi then became impatient and starts to pressure him.  By explaining how hard it was for him to tell his story, Gabriel has finally break.  Therefore, he tells Hideyoshi everything about his past.

"Don't worry about it.  It's actually nothing compare to your tragedy."

"A tragedy is a tragedy.  There should be no comparison at all."

Before he did, the Alternate has appeared.  It was so sudden that lead them the two to be scream loud enough to wake the others.

"Don't do that man, you almost gave me a heart attack!"

"Sorry, but I have an important announcement for you five," said the the Alternate with a grin.

"What would that be?" asked Gabriel.

"Ah, what the hell? Dirk exclaimed as his face was splattered by a puddle of mud.

"Did we ended up into another world already?" Sarah asked in the same position with the same attitude as Dirk.  "God, I wish he'd be more gentle when he takes us there."

"Hey, did we travel backwards in time now?" asked Hideyoshi as soon as he sees what he and everyone else is wearing.

The boys were wearing ragged white or brownish tunics and worn out brown or greenish hoses.  Dirk was the only boy wearing a hood, though it didn't matter much since it's also splattered by mud.

The girls were only wearing worn out long grey gowns.  However, this kind of clothing seems to be too much for Sarah.  Especially when the winds were too strong when they're only blowing at her.  Until that moment, Sarah has never showed her girly side.

"I didn't know that people could still wear..."  Gabriel discontinued the topic when he and Hideyoshi were both smacked by Sarah.  The pain was brutal enough to make them feel that not they're faces were getting swollen but they also feel some parts of their skulls were fatally depressed.

"You mean, how WE were sorry, Hideyoshi," said Gabriel who is still recovering from that critical blow to the head from earlier.

"C'mon." Hideyoshi persisted as he kept repeating the same word again and again.  But Sarah always tell him to shut up and every time she did, she seems to feel embarrassed.

"I never thought Sarah could be so girly.  It's kinda cute," Dirk commented.

"Are you falling in love with Sarah, Dirk?"curious Emma asked.

"What?  N-No!  Why would I love Sarah?  She's as strict and boyish a army General.  Besides, with her looks, kittens have more of a charm than her..."

"Men.  So ignorant to the core," Sarah grumbled.

"Yeah," Sarah smiled.  "I'm glad this group has another woman beside me."

"Young right now, but you'll be a strong woman later on."

"Aww, thanks.  However, you might be even better than I ever will."

"I see those two are getting along quite well," said Gabriel observing with the guys at a distance.  It is a beautiful sight to see too.  Before, when Gabriel first meant Sarah, she doesn't look like the kind of person people would ever get along; especially, with what happened back in the last world.  Now it seems that Sarah has drastically become a whole new person.

While walking onto the muddy path for a while, the group stumble across a herd of animals blocking their way.  They're short and coated with white frizzy fur.  They almost look like sheep from their world if some of them hadn't carried a unicorn-like horn on their fore-head.

"Oh, they're so cute," Emma dazzled by sight of the herd.  She was about to walk towards one to pet it until Dirk stop her.

"Emma, stay away from them!" Dirk holding his sister tight.

"We don't even know if they're harmless," said Gabriel.

"Actually, I think they really are harmless dude," said Hideyoshi pointing at the large carriage at the other side of the herd.

"Thank you," said the driver.

"Your welcome..." said Sarah before her stomach begins to growl.

"You must be very strong to endure a starving stomach."

"Didn't she just ate?" Hideyoshi whispered to Gabriel.  According to him, she did but he couldn't remember how much.

"Sir, do you know where the closest town would be?" Sarah ask.

"About less than half of day ride there," the driver said pointing at the direction in front of him.

"Do you folks need a lift?  I have enough room in the carriage and I do need some help to lift most of them if you don't mind.  However, I can't provide any payment for it though."

"Taking us to the nearest town is more than enough," said Gabriel.

"Ah it's a great blessing from God to have the such kind youths to help this old follower." the driver said while looking up into the sky. 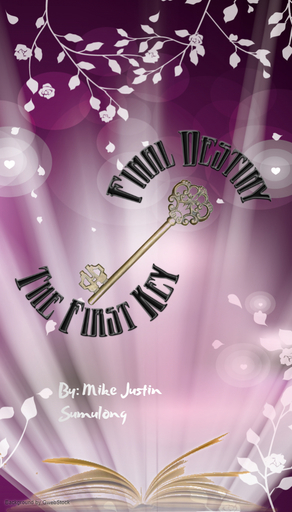 Five people, from different parts of the Earth, have found themselves inside a strange train. Then a man, called "The Alternate", has suddenly appeared. He confesses that he is the one who brought them here. Only for one purpose: collecting five sacred keys scattered and hidden around the series of worlds. Whether these five people would accept this task or not, they cannot change the fact that their adventure has begun.