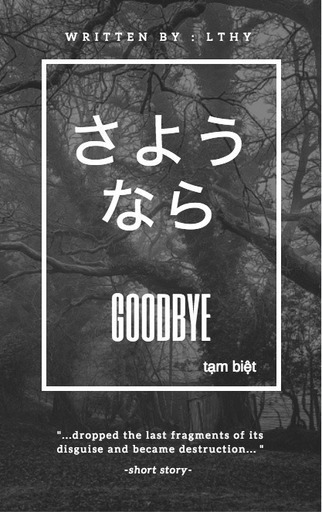 It was burning like a streak of fire as the sun caught it, magical almost... until it landed. At the heart of Nagasaki, the atomic bomb dropped the last fragments of its disguise and became destruction...

26 Reads
0 Favorites
Get the App

It was burning like a streak of fire as the sun caught it, magical almost... until it landed. At the heart of Nagasaki, the atomic bomb dropped the last fragments of its disguise and became destruction...

For as far as you could see, the city was a graveyard with no tombstones standing. Piles of jagged timber and rubble lay scattered across the vast plain, overriding the image of a bustling city from existence with an obliterated battle field. A gust of wind brought a searing miasma, filling the charred nostrils of the few who were left still breathing. Shadowed by dark, ashy clouds, the ground was illuminated by plots of fire, like badly placed streetlights. Many lay sprawled amongst the ruins, red and raw, unburied. Faint murmurs and groans escaped their burnt off lips. The odd bits and pieces of housing frames and wooden telegraph poles jutted out as if a roguish toddler had found some straggled twigs and plonked them into a churned up, rocky sandpit. Tiny trembling, fragile figurines stumbled their way through the rubble. Faint whimpers and hoarse cries of desperation caught in the odd breeze.

His body wracked with heavy sobs, released in sharp bursts. He clawed at the constricted pain in his throat. A pair of raw, blistered hands trembled in front of his eyes but he adamantly argued that they weren't his. They couldn't be. With quivering lips, his gaze was drawn to his left leg. A distinct white shape protruded from the mangled mess of thick, lumpy flesh. Shock hindered the realisation. It was bone. His bone. He whipped to the left, gagging, convulsing, acid aggravating his throat and tongue as he retched. He didn't scream. He didn't cry out. He couldn't.

His head fell back to the ground and he watched the leaves above him shiver in a warm breeze. The pain began to seep away, fury taking its place. Teeth gritted together, his hands clenched. All the aching muscles longed to move, longed to march right up to the Americans and make them pay for what they stole from him.

But a thought slowly but surely walked into his mind, its footsteps trampling all over his heart. Is she still alive? A new set of tears rushed out of his eyes, as memories with his mother began to play themselves in his head, from the warm, giggly mornings he spent helping his mother prepare breakfast to the obnoxious arguments filled with slashing words and suppressed fury. When the sobs quieted to a stuttering whimper, his eyebrows furrowed together and he squeezed them shut. This is not real. This is a dream. You were supposed to watch me perform, mother. I wanted to make you proud, mother. Another gust of wind rippled through him, delivering faint words to his ears.

"Be strong, my darling."

There was no mistaking that airy, timid voice. His eyes flew open. He was so sure that he sat up, forgetting his compromising position, oblivious to the stabbing pain. He frantically scanned the surroundings. Mother?

"Mother! I'm here! I'm alive! Where are you?" His voice was raspy, the words croaked out. With a deep grunt, he transferred his weight onto his arms and pushed himself up higher.

His lips wobbled at the surreal scene before him. Broken branches lay in a sloppy array, withered leaves scattered around. Plots of fire continued to flicker in the breeze, licking at the smokiness... caressing at the grief. The immaculate garden he had grown to know was gone. In its place lay a crime scene, save for lone standing wooden framework stalks, solemn amongst its dead neighbours. His gaze drifted towards the cherry blossom tree, its bark black with embers still glowing and puffed out the pocket of air trapped in his throat. Propped up against it, a kimono, smeared with remnants of pulverised wood and tainted with red stains, barely clung to a disfigured body; the same kimono that was supposed to be sitting in the audience at his school.

Tears were long gone. Left behind were the encrusted paths of dried tears that had streamed their way down his cheeks. His quivering figure began to lose the fight and defiance he desperately clutched at, eventually soothed by the wavering tendrils of sleep and weariness. A gust of wind picked up the limp hair on his forehead and tousled it away. He closed his eyes. A flutter of a touch on his forehead; he didn't move. A passing breeze stole his breath. He finally leaped... leaped the inevitable chasm from hope to defeat.