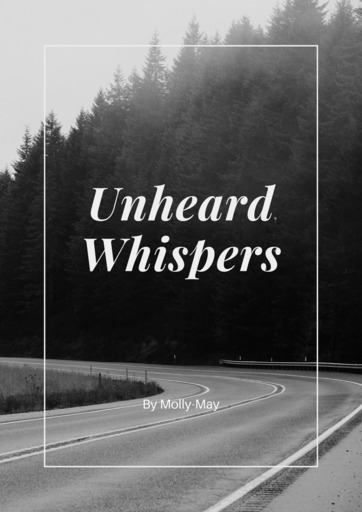 A short story of true love and eternal heartbreak.

Harsh, winter rain beat down on to the bonnet; as her truck hurtled down the seemingly endless, desolate road. She is silent, as am I. The only noise coming from the storm raging on above us and the low hum of the engine. The truck's tires sketch a pattern on the miles of dirt road we are leaving behind us, depicting just how fast she is driving. I watched her face intently, not in a creepy way, more so a way of complete awe. The way the moon's light reflected off the windshield creating a distorted pattern of light and colour across her broken features, adorning her face; making her even more, if possible, beautiful.

Her hair, a rich shade of raven black, flows in loose waves down her back, resting just past her shoulders, in contrast with her pale porcelain-like skin. Her nose; slightly crooked, yet perfect nonetheless, accentuates her prominent cheekbones. Her eyes (framed by thick, long eyelashes) tell the story of a thousand tales, that no arrangement of words could even begin to touch. Her eyes are a prepossessing blend of the deepest greens and blues; making them warm and inticing yet firey and intimidating. Her full pink lips adorn her enchanting face.

Her beauty is a prime example of sublimity. She is completely innocent to how beautiful she is. Some people would call it modesty whereas I think she is purely oblivious. I have been with her through her lowest (along with her highest) moments, because of this, I have seen her at her weakest enough times to understand how insecure she is. The times when she is weakest, the most vulnerable, are the times I love her the most, right now being no exception. Not because I enjoy seeing her in pain, quite the opposite. Her vulnerability reminds me she is human and the fierce, intimidating front she puts up is merely a pretense.

Tears spilled from her veridescent eyes as she stared blankly at the road before her, her attention elsewhere. The tears that rolled down her cheeks held no emotion. She felt numb. Empty. Broken. All with good reason, she had just lost her best friend, the girl who tore down the walls she had spent so long building, the girl she loved more than life itself, gone. Forever.

I want nothing more than to reach over, to hold her once again, to reassure her that things would be okay, but I can't. So instead I sat there silently my eyes fixed on her distraught profile. Loud sobs fell from her mouth as she drew closer to her destination, a single pink carnation along with a single white calls lily lay on her lap. (The two flowers  symbolic of death of a loved one and beauty).

The truck soon pulled into her desired location. She quickly climbed out, leaving everything, other than the two flowers, inside. She began to run down the beaten path of the quiet graveyard, her loud sobs and the noise of her black dr marten boots echoing around her. I ran after her scarcely a few steps behind her, my footsteps leaving no mark in the dirt, no noise erupting from my gentle strides. She stopped in front of a freshly covered patch of land, the headstone still shining new in the ground. She fell to her knees. Her throat letting out muffled cries as she sobbed uncontrollably into her hands. I want nothing more than to console her or rid her of the pain she is evidently feeling. She doesn't deserve to feel this way. I know I'm partly responsible. But having to witness my best friend, the girl I am completely in love with, heart breaking is the most torturous punishment I could think of. She continued to cry, muttering incoherent words of hurt words and pain into the hushed air, as I stood back and forced myself to watch.

She laid her flowers against the headstone, her hands trembling from the immense pain she is feeling throughout the entirety of her body. Her sobs grew quieter and her voice cracked coming out low and hoarse; in result of the days of endless crying and screaming, as she spoke.

"I love you..." she whispered, the tears in her eyes once again building up as she gently ran her trembling finger over the stone imprint of my name.