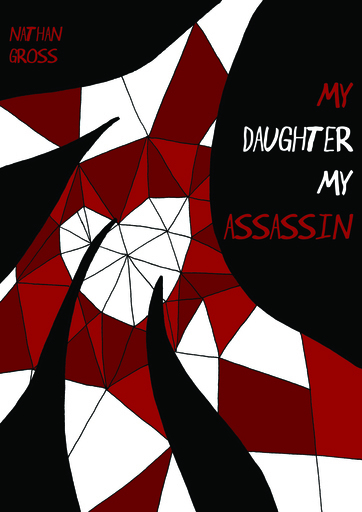 My Daughter, My Assassin.

An old house. A broken man grieves. Daniel loves his daughter more than anything. He has always protected her. Now she is coming for him, and she has a gun. She is a professional killer, what chance does a caring father have?

I was there for her first kill.

The splashes of blood staining red are still as vivid in my memory as they were on the white of the snow next to her small, light-treading footprints.

It was one of those times when a parent knows something's not quite right. One of the times when things are too quiet. I was in the kitchen, cutting vegetables, cutting meat. I could hear her singing faintly through the closed doors, the closed windows, as she played on the swing, made a snowman, made 'snow stars' lying on her back in the snow. Then there was silence.

I don't know for how long she'd stopped singing, for how long she'd been quiet. I don't remember if the silence registered and then I was just slow to react. Maybe I was caught up in my own thoughts, wondering whether carrots should go in the soup I was making or if I should save them for Mina for more snowmen. Maybe that thought was the trigger—where is Mina? What is she doing?

It must have seemed like it had been a while because when I decided to go see what was happening, I thought the silence strange enough to have turned off the stove.

I remember feeling uneasy, and then as I walked down towards the swing, I saw the blood, ripping bright red up against the white of the snow, and I became downright anxious. "Mina!"

The first splash was large, a puddle of congealing blood sitting thick like pudding in the snow. A trail of it dripped and spattered away down towards the bottom of the garden next to her footprints.

"Mina!" I ran, following the trail, past snow stars and a small snowman with a carrot for a nose, two pebbles for eyes, and sticks for arms. "Mina!" I ran, my feet sinking deeper prints into the snow next to hers, on top of hers, on top of the blood. "Mina!" Naked branches scratched at my face and grabbed at my clothes, and I staggered and slid on a steppingstone iced over. "Mina!" I ran, thinking the worst. Her prints, the blood, they led down to behind the shed. I stopped running. It was dark behind the shed. There was no sound. "Mina?"

I reached out with my hands in front of me into the dark, reaching down to her height, to where she should be. "Mina?" I whispered it this time.

Out of the darkness came a response. "She's dead."

The words stung me. They made my heart stop. My worst thoughts visualized out of the dark, but then I realized it was Mina's voice, and the world started turning again. I reached out further.

"Mina, where—where are you? I can't see you? Are you alright?"

Her hand grabbed mine, gently, calmly. It felt sticky.

She came out. There was blood on her hands, on her arms. Across her coat.

In her other hand, was a mess of red-stained, white fur. It took me a minute to register what it was.

She took her hand from mine and reached into her pocket and pulled out a small, sharp cutting knife from the kitchen. "I killed her, Daddy."

She handed me the knife. I took it in my hand. Dried blood blotted the handle like it did her hand, but the blade was wiped spotlessly clean.

Maybe I should have asked 'why'. Maybe I should have been angry, at her taking a knife, at her killing her pet rabbit! But I wasn't. I was just so damn relieved Mina was alright. That it wasn't her blood all over the garden. That she wasn't injured, or worse...

"Bessie was alive; then I took the knife, and I held her by the ears and cut her throat."

"She bled a lot, but she died quickly. I don't think she felt much pain."

I didn't know what to say.

"We should probably bury her now," Mina said.

I just stared at her.

"That would be the correct thing to do," she added.

It was then, for the first time, that Mina showed some emotion, any emotion. She blinked and looked up towards the house.

"What's Maman going to say?" She looked at me with pleading eyes.

I put my arm around her and turned her to head back up the garden. "Maybe we don't have to tell your mother—well, we'll need to tell her that Bessie isn't...isn't with us anymore, but we can just tell her that it happened, that she just passed away."

Mina laid her head against my side. "Thanks Daddy."

She gave me the rabbit. I held it up in front of my eyes as we walked back up the garden. I remember thinking that the cut, the incision, seemed so clean, so straight, so precise.

We buried Bessie. We cleaned up the snow. I put Mina in the shower, and as she sang, I put her clothes in the wash. The two of us never spoke of how Bessie died again.

Mina was four years old, and right from the start, I was complicit to her crimes.