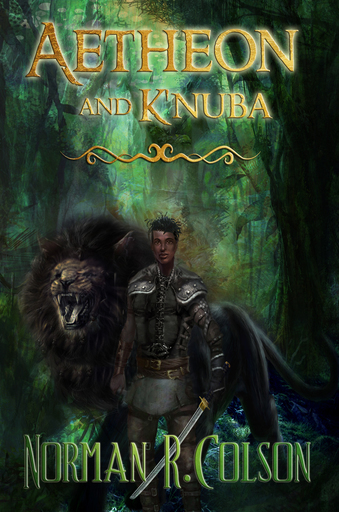 In an ancient and magical world of Terithian we are introduced to Prince Aetheon and his Telepathic Lyon K’nuba. First Born son of King Silas and Queen Lyla & Heir to the Kingdom of the Ali’a. From birth he trained to be a great warrior and lead his people into battle. Until one day his island nation was attacked by a tyrannical group of invaders calling themselves the Crimson Wyvern. With his family killed in the madness, Aetheon and K’nuba go on a quest around their world on a grand adventure stopping at nothing to bring justice & honor to the fallen. The odds are against the young prince and his companions for if they fail The world of...

10 Reads
0 Favorites
Get the App

In another time and another place on a planet called Terithian… On the green jungle plains of Ali’a. There exists a village of Warriors. Strong, Proud, Intelligent; They lived in harmony with the animals & ecosystem of the plains. For centuries they allied themselves the lyons. Fighting with them,riding them into battles, Communing with them telepathically, each of their warriors and female priestesses from birth are soul linked with the animals of the plains. The soulstone an object of great power and vast knowledge by it’s magical properties alone ever since it crashed into the plains of Ali’a centuries ago.

The tribe of the warrior monks channeled it’s mystical energy into forging life bonds with animals. They forged weapons, metals digged out of the caves their legendary blacksmiths forged into black steel, armors and arrows, made robes woven of the finest silks and used forms of alchemy to make them strong and durable yet light and flexible. Used as nets to fish, woven the silks into clothes flameproof and hardened enough to deflect projectiles. The secrets was heavily guarded within the tribe for as long as the tribe existed.

The tribe grew and grew and the legend of their existence grew within the world of Terithian. Tales of the Lyon Riders spread and grew, as they fought outside threats and protected their lands. They gained the respect of the other kingdoms & fought others. Made them retreat and won against other invaders looking to pillage their lands and their women. With the soul stone they tapped into magical energies slowing aging, generating elements & spells using the energy around them.

And the royal family has passed on leadership of the tribe down from generation to generation. They have lead the people to growth in all the years the soul link stone was there. Guarded in the sacred temple. Our story begins on Terithian in the year 996 and the birth of Young Lord Aetheon heir to the Ali’an tribe and his soul binding to the young black cub named K’nuba.

In the ceremonial hall the Soul Link stone sat surrounded by water housed inside a stone pedestal, it’s pulsing red glow shined beautifully through the hall. The chieftain king Silas standing next to his wife Lyla spoke commanding the hall as a quiet hush fell over the small crowd. King Silas was a large black man, a commanding presence his royal armor laced with silken robes, His hair pulled back into large gray dreadlocks and matching greying beard.

“Today my friends I wish to introduce you to our son, Prince Aetheon is born and he is to be joined with the baby cub K’nuba in the soul bonding ceremony we have used for generations. Passing on the knowledge of our people and joining another warrior into the tribe. K’nuba the latest son from my friend Balthazaar. He is delighted as well to share his son with mines and it is a great honor he has bestowed upon us.”

Balthazaar sat 6 foot tall huge white lion it’s mane frosted like snow he looked at his bondmate and king with a wide smile and curtsied as he telepathically spoke to him.

“It is an honor your son will make a fine warrior and future king to our tribe my friend.”

There bond was a deep one as Balthazaar was the King’s friend since their formative years. Much love and respect existed between them, sometimes Lyla joked that she was jealous.

Chieftain King Silas placed the quiet baby Aetheon into a stone cylinder basket softened by soft blankets made in their national colors black, red and gold. K’nuba slept purring as he was placed on an opposite one. The two stone baskets was placed at the foot of the soul link stone as it hummed and pulsated with glowing light a stream of light emanated from the stones coursing through the stone housing leading to the stone baskets the energy ran around the baskets lighting them up in a bright crimson glow. The Soul Link Stone hummed and pulsed faster and the glow from the room basked the entirety of it in a crimson glow brighter and blinding then it stopped and slowly pulsated as the magical energy subsided. King Silas picked up baby Aetheon and lifted him up high as the baby cooed and giggled. The attendants cheered as King Silas embraced his son and his wife stood by by his side. Balthazaar let out a monstrous roar in approval the Ali’an warriors drew their weapons and chanted songs of victory. They celebrated all throughout the night.