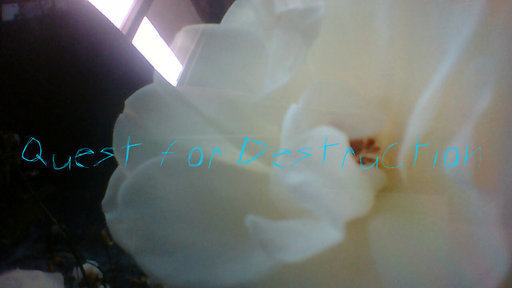 The Quest for Destruction

'Dinner time!' called Bethany Park. 'Coming' called back some children who had started to race back. Bethany dished their dinner, and then sat down at the table to eat. She picked up her fork, and dug it into the cooked chicken. Meanwhile, Sheira Thorns was walking down alongside a river. 'You know there are hideous creatures down there'. said a voice from behind her. Sheira spun on her heels, drawring her sword as she did. Brayden was sitting in a tent.

‘Well, I don’t have a sword to defend myself!’ Sheira told him angrily. ‘Just try’na help’ he replied. ‘Well I DON’T need you help, so goodbye’. And with that, Sheira turned on her heels, and walked off. Brayden sat there looking at thee river. Then he drew his sword and turned it in his hand. The blade hadn’t been sharpened in years. Brayden put back his sword in the scabbord. He looked around, and then back at the lake. ‘Red at night; shepards delight’ said a voice. Brayden turned, and saw a man with pearl white hair, pointed ears, and was wearing white robes. ‘My name is Duende’ said Duende. ‘And mine is Brayden’. Said Brayden.

Bethany looked over to the sunset whilst washing the dishers. The children had ate like hugry wolfs that had found their prey.

‘Fraco was being mean to me!’ she said angrily. Before Bethany could answer however,

‘WOW!’ said Valiente. But Bethany was screaming. And then she was pulled into the wind,

‘MUM?!?’ said Valiente. But then, a man stood in the place of the hurricane.

‘Ahh, sorry ‘bout ‘at’ he said. ‘Brook!’ said Valiente. ‘Valiente!’ said Brook. ‘Why did you eat my mummy?’ asked Fraco. ‘I din’ mea’ to hur’ ‘er’ said Brook. Brooks long shaggy beard rested on his chest, with a leather jacket and pants, with gumboots for shoes. ‘Stop being mean, Brook is as sweet as chocolate!’ said Valiente. Brook and Fraco said nothing. ‘Ohhh, little Fraco is

scared of me now, NA NA NA NA!’ said Valiente, teasing her at the end. ‘Well, Valiente, I need you to look after this’ said Brook, handing Valiente a small package. ‘Go to the pendant of Necklass River’ he whispered to her. Valiente nooded, and once more, a hurricane erupted in the living room. This time, sucking noone in.

‘Well, hand me it’ said Fraco. ‘No’ said Valiente. ‘Ohhhh, I wish mummy was here, she would know what to do!’. ‘Well she ISN’T here, so you will have to manage on your own, with Lucy and William’ replied Valiente.

‘No. The letter is MINE! GIVE IT HERE VALIENTE!’. ‘NO. IT CREARLY SAYS MY NAME, LOOK, VALIENTE!’. ‘WELL IT DOESN’T SAY IT’S ONLY FOR VALIENTE!’. Valiente ran out of the living room.

Down the path, and onto the street. William was picking grass, but when he saw Valiente running, he got up. ‘Valiente! Where are you going?!’. ‘To the pendant of Necklass River!’ Valiente

shouted back. ‘I’m coming two then!’. William started to run. He was about 10 metres away from Valiente, when a strider came up and shouted ‘GET OFF THE ROAD 10 YEAR OLDS!’ He shouted.

‘IM 12!’ Valiente shouted back. Then Valiente stopped. And turned to William. ‘Where is the pendant of Necklass River?’

Valiente looked at the map from the letter. ‘It says. . . . we need to go to Gentil’

Brayden was walking along the river bank of Necklass River. He too was going to the pendant to see Brook.

Brook could be a little bit stupid, but otherwise he is quite smart. But then, a Pirate put a sword up to braydens neck. Brayden drew his sword. ‘I’m going to live either way’ he said. ‘What other way?’ asked the pirate. ‘A fight’. Brayden dug his sword into the pirate chest. The pirate fell to his knees, ghasping in pain. Then he fell back, landing in a painful position. Brayden drew his sword from the flesh, and put it away in his scabbord.

‘I have fought many pirates alike you, and you lived the longest, so be proud’.

‘Wait, one question, how are we going to get across the river?’ asked William. ‘We swim’

When they reached Necklass River, Valiente jumped straight in, and started to swim across to the other side. When Valiente reached the other side, she hopped up, and looked at William. ‘Show off’ he muttered.

William jumped into the freezing water.

William felt abit, sad for the water. As the water just gets sucked into the ground at the pendant.

‘Hurry up slowcoach!’ said Valiente. William reached the other side, and got up onto the river bank. ‘That wasn’t the most graceful way to tell someone to be quicker’ said a voice. Valiente and

William turned quickly. ‘My name is Brayden Rusher, and I am, alike you, travelling to the pendant of Necklass River.

Valiente looked at Brayden. Bethany had warned her children not to be fooled by theese men.

But, he seemed humorous, and Valiente LOVED people who were humourous. So she decided to go with him. Even though William, was skeptical about Brayden. They folloowed Brayden along the river bank. ‘People say it’s eaiser to get to the pendant through Lutin, but I don’t belive it’

said Brayden. ‘Yeah, Necklass River is hard to cross through Lutin, and you are going near

Tueur’ replied Valiente. ‘Whats wrong with Tueur?’. ‘Mum always told us stories about Tueur people going to war against Lutin, Gentil and Royaume, she said she moved to Royaume because it

Brook was waiting impatiently at the pendants edge. He had been waiting 15 hours for Brayden and Valiente to come.

To make time fly, Brook had decided to go fishing. He had cuaght two big ones so far, and was on the trail of a third big one. ‘Come on, come on’ he said.

with a soft silver back, and sharp pointed teeth.

Then Brayden came around the corner, talking to Valinte. They were luaghing joyfully

Brook looked at them both. ‘1 hour late’. ‘I thought we were going quite well, but obviously not’

said Brayden. Valiente looked at Brayden, and then at Brook. Brook got out of the fishing boat, and put his rod down.

‘Well well well, out for a morning stroll’ said a voice behind Brayden. He spun round, drawring his sword, and getting into the position to fight. ‘I wish not to be addressed with a sword’ said a beautiful woman, the most beautiful Valiente had ever seen. ‘Faith Vapper’ said Faith. ‘Rusher, Brayden Rusher’ said Brayden. ‘But why have you come?’ ‘Royaume is being fought, the pirate you slayed’ Faith said. ‘Was the least of them. Our people

should’ve known all along, Royaume is an easy spot to attack. They are crossing The Pendant,

and will be in Royaume in no time’.

‘Not if we stop them’ said Brayden.

‘Well, that would be insane’ said Brook, who had kept quiet for some time ‘How far away are they?’ asked Brayden, ignoring Brooks last remark. ‘Almost there’ said Faith.

They were powering a small vessel through the wicked waters of The Pendant, and was near the pirates, but not near enough. Faith took out her bow and arrow and aimed. If hit one of the Pirates

right in the chest. ‘Ow, that would hurt’ said Valiente. Brayden drew his sword from

his scabbord. ‘Oh yeah, ya might need this’. Brayden threw Valiente a sword in

a scabbord. ‘Made of pure gold, my favourite one’. The dead Pirate hadn’t alarmed anyone on

‘They were trained to never feel sad, so they can never

switch sides, or betray Tueur’. ‘So the Pirates come

‘Yes, I never trusted anyone from Tueur’. Valiente saw Brayden look the other way.

Valiente knew that Brayden had to be from Tueur, as most halves live there. Faith fired another arrow at a pirate, who also dropped dead. They were catching up to the vessel. The waves from the vessel were hard to paddle through, but they were winning againt them. Brayden threw up a ladder and a Pirate turned.

He readied his sword, looking for a fight. Valiente scurried up the ladder and chopped

off the head of the Pirate. Another Pirate turned. Valiente went on a killing spree. One by one, the

Pirates fell to the floor.

Once no Pirates had noticed her, Vaiente threw most of the dead Pirates off the side of the ship into the freezing water below. Brayden emerged, and stabbed a Pirate in the back, then Brook flattened a

Pirate with his stick. Brayden stabbed more Pirates until there was only one Pirate left. ‘Would

you like to do the honours?’ Brayden said. Valiente smiled, and stabbed the last Pirate.

It was an overwhelminig sensation, as the Pirate fell dead onto the floor. ‘Well, that was easy’

said William, emerging from the ladder.

Brayden looked out over the sea of The Pendant, the hurricane of waves washing over the sea.

‘We need to go back’ said Brayden. ‘But I want to go see Lucy!’ said William.

‘I wish I could speak Elviash’ muttered William. ‘Shut up Will’ said Valiente. ‘Wait, Elviash

is the alphabet backwards, so. . . . I have no idea what they are saying’ Valiente whispered back to Brook. ‘Let’s go back, and travel to Tueur’ said Brayden.

The winds whipped the sea onto the neglected boat. The sun setting over the rippling sea. Brayden steared the boat past a whirlpool. He knew that even the slightest wave would knock the boat over flat. The night was sharp and cold by the time they got back. Nobody had said anything the entirty of the time.

Brayden jumped off the boat, followed by Brook and Valiente. But Faith and William both climbed down the ladder.

'Jecotoko' said Faith. A fairy descended to the ground. She faded in out of this air,

the wind lashing at her beautiful red hair. Her great green eyes twinkled like a star from Everare.

Poems I Wrote When I was a ChildRosa Stewart

Poems I Wrote When I was a Child

I was a strange child 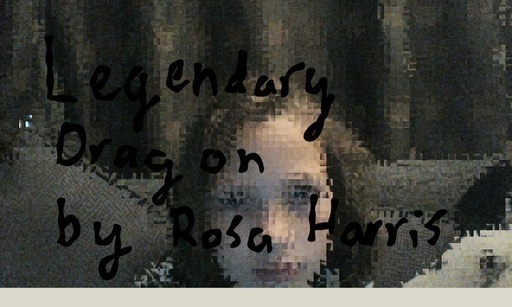 Sheira and Rose have discovered something odd. They go on a journey to see what it means