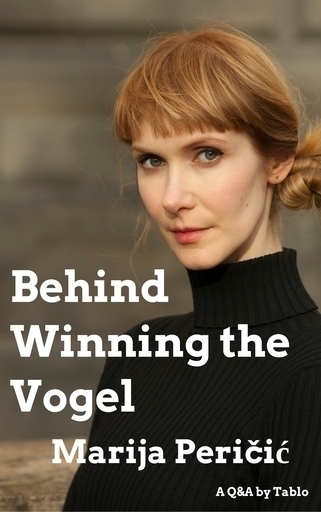 Behind Winning the Vogel: Marija Peričić

An interview with the 2017 winner of The Australian/Vogel's Literary Award Marija Peričić, with fascinating detail behind the scenes writing her novel and great advice for other authors.

Marija Pericic grew up in Perth, Western Australia, the child of German and Croatian immigrants. She holds a Masters degree in English Literature. She now lives in Melbourne where she teaches English as a foreign language.

The Lost Pages is her first novel. It is a richly reimagined story of Max Brod's life filtered through his relationship with Franz Kafka. In this inspired novel of friendship, fraud, madness and betrayal, Marija Pericic writes vividly and compellingly of an extraordinary literary rivalry.

'To frame The Lost Pages as being about Brod is clever and interesting. The Kafka we meet here is almost the opposite of the one we have come to expect.' Stephen Romei, Literary Editor, The Australian

** ​Read an excerpt of The Lost Pages.

What attracted you to this particular story?

I happened to read an article by Elif Batuman in the New York Times Magazine back in 2012, which was about an international court case around a collection of lost Kafka manuscripts. The case that the article described was so Kafkaesque as to be barely believable, and it instantly fascinated me. The story had everything: armies of lawyers representing both sides; septuagenarian cat ladies; obfuscating tricks by the defendants; all of which was going on around the mysterious lost Kafka papers, which almost no one had seen, or knew what they contained.

When I read the article, I didn’t know a great deal about Kafka, and my idea of him was very much informed by his stories. I had thought of him as being a pretty depressing fellow: tubercular, neurotic, but when I started reading more about him I was surprised to find that in fact he was a very different kind of man. He was known for his charisma and sense of humour. He seemed to be quite obsessed with health and fitness, and practised both Fletcherising and the Müller technique. He was successful at his job in accident insurance, where he invented a number of safety devices for factory workers, including the civilian safety helmet.

When I started reading more about Max Brod, Kafka’s friend and literary executor, I was interested to find a similar reversal of man and image. I had thought of Brod as a successful and confident man, handsome in the photographs of him and an influential member of the arts community in both Prague and Israel. However, I discovered that he suffered from a severe spinal curvature, for which he had had to wear a full-body brace for years at a time in his childhood, but even this had not stopped him from developing a hunchback later in life.

This reversal of images and identities of the two men interested me, especially considering how much control Brod had over Kafka’s image and legacy. Almost all of Kafka’s work we only know through Brod, who, famously, defied Kafka’s instruction to destroy Kafka’s manuscripts after his death, and instead went on to publish them. But Brod did not only publish them: in some cases he edited, and at times even completed these works.

I became interested in the relationship between the two men. I knew that Brod had acted as mentor and patron, not only to Kafka, but to various other writers and musicians, but Brod himself was a relatively successful writer: how must he have felt when he was faced with the genius of Kafka’s work? At the time of writing, the trial around the Kafka papers was still in progress, and no one knew what they might contain, but there were rumours of a Brod memoir being among them, so The Lost Pages became this imagined memoir, telling of the time of Kafka’s rise to fame and the rivalry between the two men, in literature and in love.

This was your first attempt at a novel but had you been writing regularly in other ways? Had you published any other writing?

I had been doing academic writing, related to my Masters in Literature, and had an academic article published as part of this. In terms of creative writing, I have been writing short stories pretty much my whole life, but I never really thought of trying to have them published until last year. Lots of them were rejected, and then late last year I had one published, which was so exciting.

Did teaching English have any influence on your writing? Other influences?

I think teaching English as a foreign language keeps me aware of the structure of the English language, and its strangeness. German is actually my first language, and I first learned English at primary school, but now I consider myself a native English speaker. Teaching English learners preserves my outsider status in relation to English, which I like.

What was the most difficult aspect of bringing your novel to life?

I found the initial planning stage difficult: to decide on the right structure and voice in the planning stage, because once one has made that decision a commitment is made and it’s hard to change. I spent the most time over this part overall, it took years. I also struggled with the ending, which I wrote in five completely different ways.

Did you ever try writing different versions of your story to find the right tone? How do you settle on the narrative voice?

Yes, I did. I experimented at length with different structures and characters, for each of which I wrote plans and character profiles. I had initially wanted to tell the story of the trial that had first got my attention, but none of these plans really seemed to work, and the characters never quite came together. Then I researched more about Kafka and Brod and became interested in their relationship and decided to tell this story instead, set at the time of Kafka. Max’s voice came very strongly to me, and I knew then that I had to tell the story from his point of view, about his rivalry with Kafka.

How long did it take to write your book?

From the inception to the finished book was five years, but the bulk of this time was planning and then re-writing and editing. I wrote the first draft very quickly in three months. My partner went away for this time, so it seemed a good opportunity to get it done, because I had our apartment to myself. I set myself a daily quota of at least 1000 words a day, which I just wrote whenever I had a free moment around my teaching job. Over the next year or so I went thought about four complete drafts, each taking a few months at a time.

What did you learn in the editorial process?

Mostly that it takes a lot of re-drafting and editing, and that I found it helpful to leave my work alone for a while after writing and before editing to get some distance. Going through the editing process with Allen & Unwin was a huge learning experience. Having my work closely examined by professionals was so helpful, and they picked up on so many things, on so many different levels, that I had missed.

Any general advice on writing for aspiring writers?

'Read and write as much as you can. I think also really trusting your gut feelings is helpful too, because writing is so subjective, and all kinds of advice might be given to you that might not actually be what you want for your work.'

Most writers experience rejection in some form at some and find it hard to continue from time to time – any suggestions on how to stay motivated and maintain belief in your story?

I have also experienced this, and it can be hard. I think it’s important to remember that writing is subjective, and this is a great thing: it gives us diversity. Not everyone is going to like everything, and just because one person at one instance has rejected your work doesn’t necessarily mean that it is no good, but just that it is not for them at that time. Also I think it’s important to remember that you are not your work. Rejections are not a judgment about you.

I think a great thing to stay motivated is to focus on the pleasure and fun of writing: the joy of why we do it in the first place.

Do you think it’s important that authors today are proactive in terms of self-promotion online and otherwise?

Online promotion and having an author platform does seem to be of huge importance today, particularly for emerging writers. This is something that I was quite afraid of at first because I’m a very private person and self-promotion does not come naturally to me at all, nor does the online world of social media. Surprisingly though, this is actually turning out to be quite a lovely experience. There are few things I love more than talking about books with people who like books, and this is really what self-promotion is, or can be.

Who are some of the writers you’ve learnt the most from (and what)?

My whole life I have been a voracious reader of fiction and there are so many writers that I absolutely love and read and reread all the time. It’s hard for me to answer this question without going on about it all day.

My most enduring love would have to be Iris Murdoch. What I love about her novels is their construction. Many of them can be read on different levels: they often have a funny and engaging surface level of action, which overlays quite complex philosophical themes (Murdoch also taught philosophy at Oxford). I also like the structural shape of her novels in terms of the characters’ relationship dynamics. They can be very dance-like or musical in form.

Another of my longest loves is Vladimir Nabokov, in whom I rejoice for his gorgeous prose. Although I do find his portrayal of women politically problematic at times, his writing is of such transcendent beauty. I also think some of his work is terribly funny.

Lately I have been reading Lucia Berlin, whom I love for strength of her voice, and the clear-eyed unsentimentally with which she writes. I think honesty is a very appealing trait in writing, and Berlin’s writing really has this. The work of Mary Gaitskill, Otessa Mosfegh and Elena Ferrante (particularly her early three novels before the Neapolitan Quartet) has this same very honest intensity in writing about women’s experience and sexuality.

I couldn’t say that I have learned from these writers, but I certainly admire these different aspects of their work.

Are you going to keep teaching? Have you got plans for your next book?

I imagine I will keep teaching English language, and I would also love to move to teaching creative writing in the future. I am just about to take a year off teaching to travel and work on my next novel. I’m so excited (and a bit nervous) to get back into the writing process again.