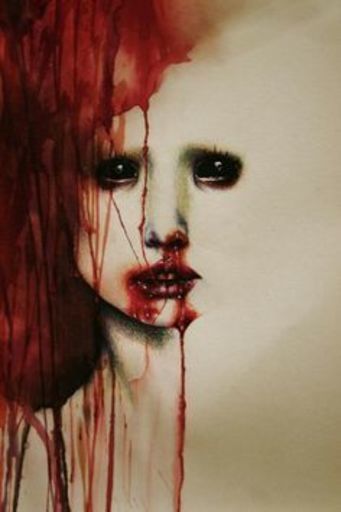 Even when your family is monstrous you do everything to care for them, sometimes suffering for it.

81 Reads
2 Favorites
Get the App

The rain pours down outside. The man pulls the blanket tighter around his shoulders. His hand is waving rapidly while his hair falls into his eyes, he absently pushes it back with his free arm. His occupied arm moves wildly, the charcoal imprinting the page. He can feel the drawing is nearing its end and he pushes himself further. His eyes red from sleep deprivation. His backaches from his arduous labor but he is dedicated to finishing.The rain seems to take a momentary lapse and the man freezes in place, his charcoal still pressed to the page. There is a banging at his door so loud he fears it will break down the cabin door.

He draws the last few lines and begins to shade the darks of the eyes. He readjusts the fangs to be even more menacing. The claws he has manufactured have become the sight of his nightmares, he only hopes that it is enough. He runs his hand along the drawing, creating a texture to its fur - envisioning it as a creature that can move so fast it is able to maneuver through falling raindrops. He is careful not to imagine it as too powerful. The last thing he needs is an invincible monster. As the door flies open he whispers the words, “and now you are free.”

He knows it won’t be long before she finally bursts through the door. She smells her meals immediately. His monstrous illustration moves off of the page of his sketchbook, in time to greet his first creation. She is as remarkable as the day he drew her. It was before he knew what the sketchbook was capable of.

He had been obsessed with the human form but he couldn’t perfect it with his sketches. There was one image that he knew would be different. She had been trespassing throughout his mind for months before he finally had money to buy supplies. The charcoal had been the consequence of stumbling upon a leather bound sketchbook. It had been pressed between a stack of books at the used bookstore by his apartment. He wasn't looking for anything in particular, just wasting time. The spine of the book had caught his eye. The leather was a pale green,a color he had always been partial to so he liberated it. Paying a mere eight dollars for it he remembered the relief he had felt to finally get the girl out his mind and onto the page. He had nearly run to the art supply store, purchasing the cheapest charcoal and committing her to paper immediately thereafter.

The girl had just turned twelve. She had big blue eyes that seemed almost too large for her small round face. Her skin was soft and her checks were in a permanent blush as if she was caught in a delightful laughing fit. He recalled the bounce of her girls, the way her auburn trestles framed her bright face. And then he remembered how when he had drawn the last stroke how something had come over him. It was a like a spell, as if he were under the influence of something much more powerful than him and it forced him to speak, to say aloud the same arbitrary words.

Anna the lovely fragile girl came to life, she rose from the page. She was still beautiful only her bright blue eyes, which she inherited from her mother, were filled with hunger. It was a hunger that, he would soon learn, was nearly insatiable. Her brilliant smile, which reminded him of his own mother, would remain - only accented with fangs. A wickedness eclipsed the cuteness that was somehow still present even if contorted to disturbing heights.

The man watched as the image of his daughter pulled the monster apart limb from limb before dislocating her jaw and feeding on it. He backed away slowly, she was more animal than human. While she preferred to feed on the enormous monsters, he couldn't trust that she wouldn't also eat him.Even if she wasn't his real child, her likeness (even this way) was uncanny. She was a dangerous volatile predator but she remained his little girl.It was clear to him now that the sketchbook was meant for horrible things. It turned everything into a rotting unevolved version of whatever he had illustrated. It was a powerful object, one whose origins he often wondered about. But he could never destroy it, just as he could never destroy her. He’d rather have this demonized version of her than nothing but a fading memory.

As if sensing his presence she turned, blood from the monster dripping down her face. Absently he reached for her face, to feel her skin after all these years. His eyes lock on hers as he begs her to brake her trance of fresh meat, to finally see him but she doesn't. She straightens up, pushes her shoulders back and pulls up her arms and he sees how long her claws are. They are hooked like talons. She doesn’t see her father or at least he hopes. He would never want her to have to live with what she has done. She can’t help what she is, what he has created. She advances on him, her fangs piercing into his neck. He feels his blood pooling out of his veins and he prayers that no one ever finds her, that she finds a way to live without him.