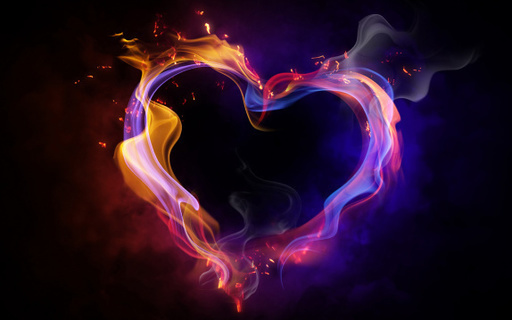 A woman tries to learn how to best love her wife.

She reaches for her and she pulls away. She sits down beside her and she turns her knees, making her body a divider. She rests her head on her's and she's up, out of the room.

First she had tried to love her bigger, larger, suffocating her with grand gestures. There was no dinner that wasn’t lit by candlelight. Every week-iversary was celebrated to perplexing exaggerated proportions but she still slipped through her fingers. Every inch she moved closer to her, the greater the distance it was met with. This caused her to change the way she loved her wife.

Once again she altered how she showed her unwavering affection. This time she tried to meet her with more, smothering every question with a kiss. Each argument was avoided with hugs - there was no room for difference if she physically squeezed it out of her but each time she pulled her near she felt her hips turn away, her shoulders somehow grew broader. It was a fight to touch her and she began to feel unwanted and worse un-consensual. She was vexed. Unaware of how to love someone that was so far away. Someone that she couldn't feel even when she was wrapped around her. So then she tried to love her farther away, allowing her the space that she seemed to cling to, even after she had said, “I do.”

She gave her the time, she stopped trying to force her to love her the way she had been loved, the way she had seen love. She watched her lover, she watched her when she wasn’t aware of it. She saw how she grew excited over things that she would never understand. She saw how she smiled at the sun when it failed at its attempt to hide behind a cloud. She watched how the fall brought a sadness from within her that had first seemed to develop out of nowhere. She watched her until she saw that there seemed to be a pattern to her. It was not predictable or boring but complex and strong like her. There were talents that she possessed that she had never seen before. She began to wonder if they had always been there or if she had been too close to see them before. She watched her and she fell further in love with her, so in love with her that she pulled further away so she could admire her from afar.

She wanted to be where her wife became more beautiful, where she became this subtle force of nature that could only be appreciated fully once you were separated from it. But her lover gave chase. She fought to be suffocated, to be longed for and she found herself pushing her away so she could see her. The grand gestures returned as she tried to coax her back to what they had once been. Her lover not yet realizing that they could not go back, that their love was something that had a life of its one, one that forced them together and pulled them apart. One that commanded their relationship but also who they were away from one another.

They pushed and pulled at one another while their love controlled and contorted them like marionettes. Only one thing forever remaining the same, they loved each other.